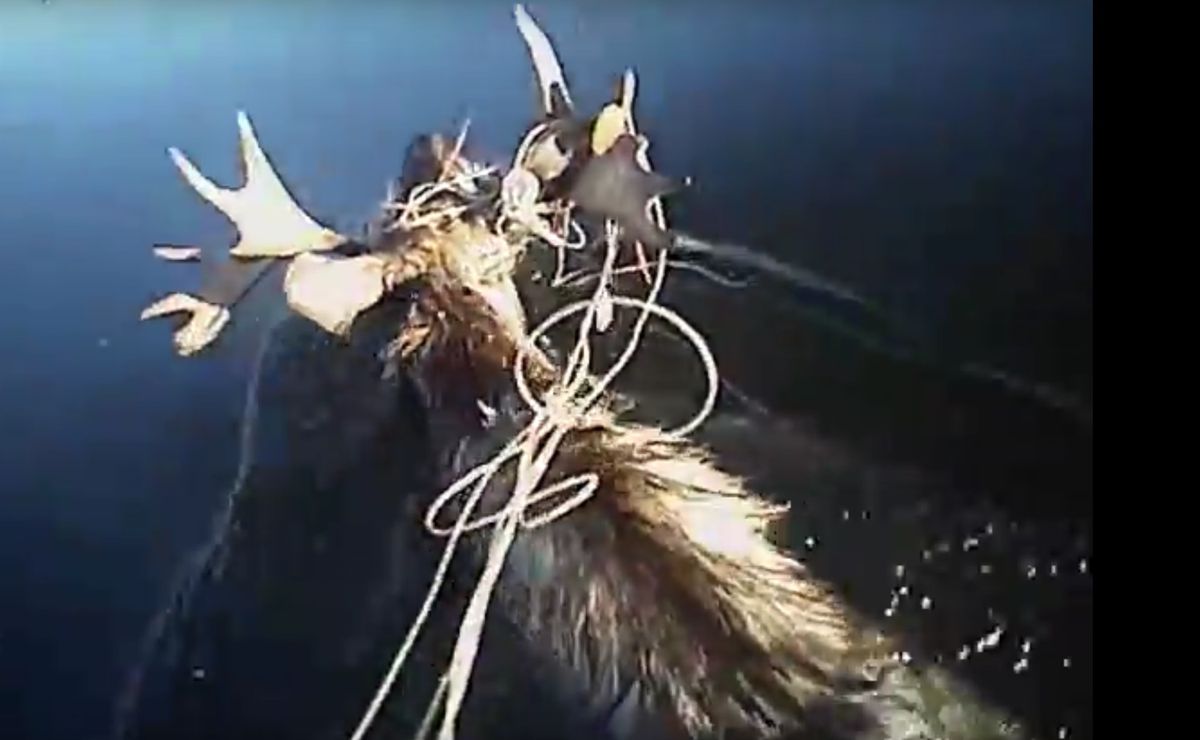 Lewis doesn't generally chase down swimming moose, but this one had a problem — an extra-long dog run cable wrapped around its antlers and neck. The thick cable was catching on all manner of things as the moose waded through lakes just outside Soldotna.

The Fish and Game office is often called about moose with objects tangled in their antlers, especially during rutting season. Christmas lights and electric fencing are common. If whatever is wrapped around their antlers isn't affecting the animal's quality of life, he said Fish and Game generally lets it be. But the dog run was dragging far behind the moose and catching on trees stumps and debris, and it posed a threat to the bull he estimated was only a couple years old.

"I was really afraid that he was going to get tangled in a shallow lake until he was exhausted and just drowned," Lewis said in a phone interview this week. "The chances of darting him were zero in the water," because that would have also put the moose in danger of drowning.

Lewis had attempted to get at the moose the day before, but couldn't get close enough to cut the cable. So when Lewis got another call on Oct. 13 that the moose had been spotted on Mackey Lake, just outside downtown Solodotna, he decided to go after it again.

The man who called in the moose happened to have a 10-foot rowboat. So Lewis and two other men hopped in and started after the swimming animal.

It took some hard rowing, but when they finally caught up with the moose, Lewis, wearing a body camera, grabbed it by the antler and cut at the tangled cable.

But he wasn't able to get all the cable off the first try — something Lewis said he's slightly embarrassed about. He said glare from the bright sunlight kept him from seeing how much of it was dragging around the moose. He realized they'd have to try again, and that led to another slow-speed chase.

[Related: Someone is stealing roadkill moose from the side of Alaska highways]

The second time Lewis and his crew got close to the moose, they were able to grab it and cut off all the cable twisted around its antlers and neck.

Lewis said the tangled-up moose shows why people should be cautious about what they leave in their yards. Moose in rut will attack all kinds of things, even empty child swing sets. If possible, people should put away those things to keep moose safe and prevent more slow-speed lake rescues.

"Bulls get feisty and take on everything," he said.