Big, bad predator image aside, wolves are happy to grab a salmon out of a stream 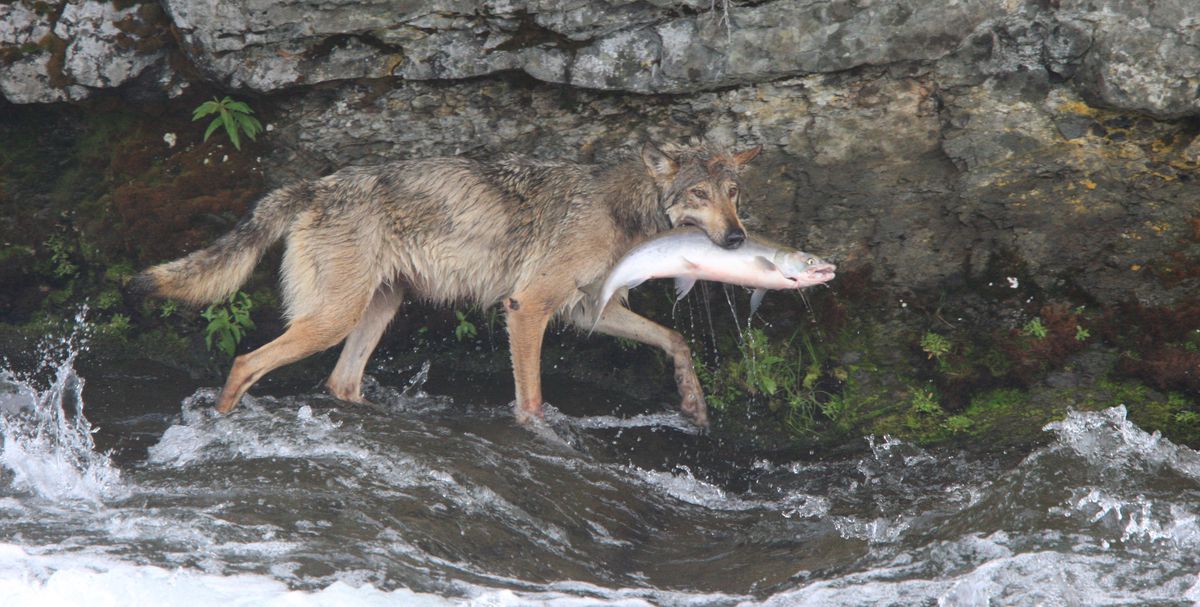 Bear watchers at Brooks Falls got a rare treat on July 8, 2007. An enterprising wolf fished out more than a dozen salmon as bears also fished the river. (Paul Stinsa)

Bear watchers at Brooks Falls got a rare treat on July 8, 2007. An enterprising wolf fished out more than a dozen salmon as bears also fished the river. (Paul Stinsa)

Wolves, as readers of fairy tales know, have enduring reputations as big, bad predators. But a growing body of evidence shows that wolf diets can be diverse and extend beyond the big animals that they hunt down.

In Alaska in particular, the studies say, many wolves dine on a daintier dish — salmon.

Two recent studies focusing on coastal areas of Southwest Alaska fill in details about those food choices, quantifying the proportion of salmon in wolf diets in different locations and times of the year.

One study, newly published in the Canadian Journal of Zoology, studied wolves in Lake Clark National Park over four years — 22 wolves from nine social groups roaming the park. Researchers examined the chemistry of hair and blood samples, which revealed the chemical fingerprint of food eaten by the animals.

Of the test subjects, five had summer diets that were at least half salmon. The others ate mostly food from land in that season.

Use of salmon varied widely between individuals and groups and between seasons and years, and there was a lot of evidence of diet switching as seasons changed and years progressed, the study said. Estimated proportions of salmon in individual wolves' diets ranged from 1 percent to 89 percent in different seasons and locations.

The important message is that salmon filled out a diet that might otherwise be unreliable, said Jeff Welker, a biology professor at the University of Alaska Anchorage and co-author of the Lake Clark study.

"Salmon provide a way for wolves to buffer themselves with herbivore populations that tend to go up and down," said Welker, who works at the stable isotope laboratory where the chemical analysis was performed. "Being able to use both these resources as is provided is a pretty good strategy"

[Why do salmon hunt in packs? The answer might be ravens]

Another recent study, which also used isotope analysis of hair samples taken from wolves, found that marine resources accounted for 28 percent to 56 percent of Southwest Alaska wolves' diets. That study, led by U.S. Fish and Wildlife Service biologist Dominique Watts, was published online last year in the Journal of Mammalogy. It analyzed chemical profiles found in samples of hair taken from wolves from 2006 to 2013.

Marine resources eaten by wolves included salmon but also marine mammals, either hunted directly or beached carcasses that are scavenged, Watts said. In the past, he documented wolves' habit of eating marine-mammal meat and even watched wolves hunt sea otters and seals. Though most of the wolf diet consists of ungulates — caribou and moose in Southwest Alaska — the marine foods are important supplements, he said.

Just as the level of salmon use varies among individual wolves, so do their salmon-eating methods.

In his thousands of hours observing wolves, Watts has seen them fish salmon out of the water bear-style and carrying their catches in their mouths.

"Generally, what I saw is they were running down into the stream and chasing live salmon, just like bears," he said. He has also seen them carrying salmon carcasses to dens for pups.

Wolves sometimes scavenge on dead salmon, and they appear at times to be able to eat dead fish that are preserved over the winter beneath ice, Welker said.

The knowledge that wolves eat salmon is not new. The fishy diet of wolves in salmon-rich Southeast Alaska and in British Columbia has long been recognized, for example.

Coastal wolves' use of marine foods, including salmon, shows up in other chemical analyses. A 2014 study by University of Alaska Fairbanks scientists documents much higher mercury levels in the livers, kidneys and muscles of coastal Alaska wolves than in their Interior Alaska counterparts, indicating intake of marine foods.

But salmon can be an important food for wolves even far from the coast.

A landmark study published in 2010 showed how wolves in the northwestern portion of Denali National Park subsist on chum and silver salmon. In that part of the park, the usual wolf prey — moose and caribou — are scarce, but the study found that wolves thrived there nonetheless, successfully filling out their diet by pulling fish from the spawning-area waters.

"Wolf-prey relationships in Denali in part depend on or are affected by things that are going on in the Bering Sea," he said. "Everything is kind of connected, when you think about it."

The fish-eating behavior extends to wolves beyond Alaska and British Columbia. In Yellowstone National Park, wolves are known to feast on trout. In Japan, isotope analysis has revealed that an extinct species of wolf, the Ezo wolf of Hokkaido, ate salmon and marine mammals.

Sometimes wolves fill out their diet with non-meat sources. They have been known to eat berries, which can be an easily acquired summer food when crops are abundant but ungulate prey numbers low.