Did the ‘blob’ drive humpbacks out of Southeast Alaska waters? Some scientists think so. 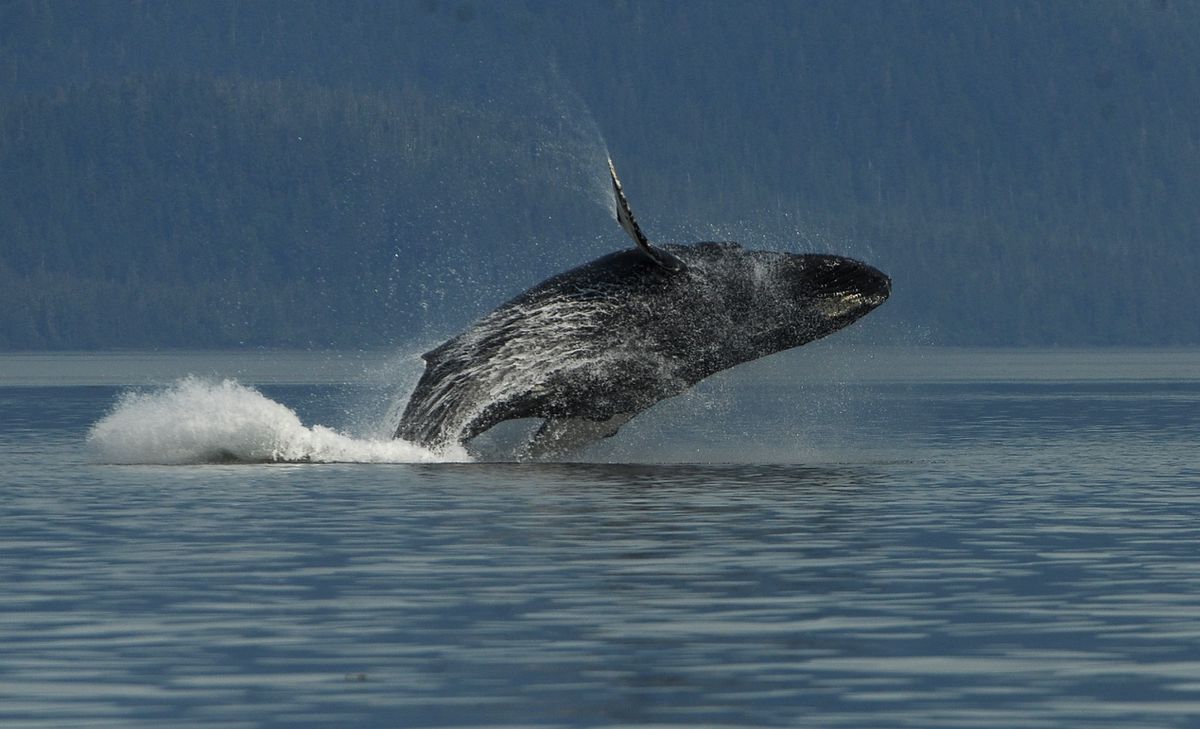 A humpback breaches in Frederick Sound off of Kupreanof Island north of Petersburg on Saturday, July 21, 2018. (Bob Hallinen / ADN)

A humpback breaches in Frederick Sound off of Kupreanof Island north of Petersburg on Saturday, July 21, 2018. (Bob Hallinen / ADN)

Humpback whales support a whale-watching industry in Juneau worth tens of millions of dollars. The whales come to Southeast Alaska year after year and bring their newborn calves with them.

The whales come every summer to feast on herring and krill in the nutrient-rich northern waters. The same individuals return year after year.

Some become local celebrities, like Sasha, whose fluke has a mark that resembles the letters "A" and "K." Down in Hawaii, where humpbacks spend the winter, she's known as the Alaska whale.

But for the past few years, some whales have stopped coming back. Kayl Overcast has worked in the whale watching business for 12 years. He says he noticed a change around 2014, then things got worse.

"There was a point last year where there was only two whales in our whole area," he said. "I never remember that in the whole rest of the time that I'd worked on whale watching boats."

Overcast wasn't the only one to notice a change.

Chris Gabriele works for the National Park Service in Glacier Bay. She spends the summer sitting in a boat and counting whales. Each whale's fluke is unique, like a fingerprint, which allows Gabriele to keep track of who's around.

She said the whales were doing great until 2014, when the number of whales in the park plunged.

"It took me aback when so many whales that previously had come to Glacier Bay year after year after year, and we're talking like 20, 30, even 40 years, all of a sudden disappeared," she said.

Overall, the number of whales in Glacier Bay declined by nearly half between 2013 and 2017 and some whales that did come back were abnormally skinny. Glacier Bay is the only place in Southeast Alaska where humpback whale numbers are monitored year after year, and anecdotal reports throughout Southeast tell a similar story: Humpback numbers have been down.

Gabriele suspects the blob is responsible.

The blob was a marine heatwave that swept across the North Pacific beginning in late 2013 and disrupted the entire food chain. To understand why, you have to start at the bottom.

Normally the zooplankton in the North Pacific are rich in lipids and nutrients. But after the blob warmed up the ocean, the zooplankton didn't grow as fat or plentiful. That meant less food for fish and krill, and malnutrition spread all the way up the food chain.

The whales returned to this food desert after fasting all winter in Hawaii. For animals that need as much food as whales do, there just wasn't enough.

So does that mean that all the whales starved? Well, not exactly.

"Humpback whales will follow the prey and they are very resourceful and adaptive," she said. "The prey is not always reliable and it can be different from year to year and humpback whales are really good at adapting and finding the prey that they need."

More humpbacks than normal have been reported in the Bering Sea and offshore in the Gulf of Alaska. But there's no way to know for sure where all the whales went. They may be big, but the ocean is much much bigger.

So now that the blob is receding, will the humpbacks that left come back? That depends.

"It's hard to say if humpback whales will come back but given that we don't think that humpback whale numbers are decreasing and that they're actually more likely to be shifting their distribution, it seems intuitive that there might be a shift back if the prey became available," said Teerlink.

Until then, whales like Sasha will have to contend with more boats following them around. Research suggests that so long as whale watching boats give whales space, they don't pose a threat. That's good news for the industry. With 60 vessels in Juneau and counting, that makes each whale all the more valuable.