After 3 days, ‘stressed’ sea lion that ventured into Sitka can’t find its way back to the ocean 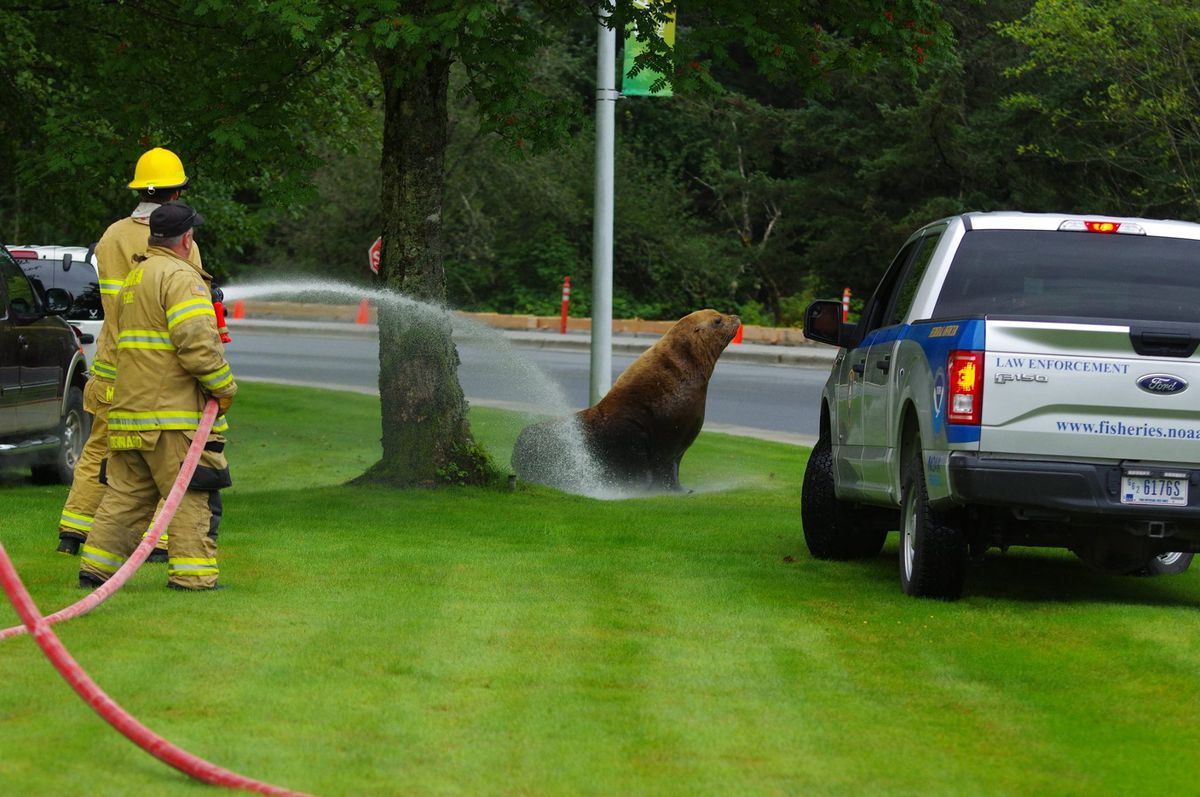 Firefighters with the Sitka Volunteer Fire Department try to usher a Steller sea lion to the sea. Sept. 1, 2018. As of Sunday, the animal has been in the woods of Japonski Island, an area of Sitka. (Roberta White)

Firefighters with the Sitka Volunteer Fire Department try to usher a Steller sea lion to the sea. Sept. 1, 2018. As of Sunday, the animal has been in the woods of Japonski Island, an area of Sitka. (Roberta White)

Wildlife officials tried unsuccessfully Sunday to coax back to the ocean an increasingly stressed and hungry Steller sea lion that has been heaving around Sitka since Friday, puzzling biologists and drawing crowds.

As of Sunday night the adult male sea lion was "hiding out in the woods" about a quarter of a mile from the sea on Japonski Island, an area of Sitka that's separated from downtown by a bridge, said Julie Speegle, a spokeswoman with the National Oceanic and Atmospheric Administration.

"At this point he's likely stressed, dehydrated and hungry," Speegle said. "And scared and frightened because of all the activity around him."

The sea lion was first spotted early Friday morning. A worker at Sitka's hospital filmed a video later posted on Facebook of the animal quickly hauling itself down a road.

The sea lion has since been seen at an old dormitory on the grounds of Mt. Edgecumbe High School and was heading toward the water but "at some point he veered off and went into the woods."

NOAA is asking the public to clear the area in Sitka where a male Steller sea lion is in distress, and is hiding in the woods; the incident is drawing onlookers. Please, for your own safety and the well-being of the animal, if you are in the area, leave. Thank you! pic.twitter.com/UosBejhlGm

On Sunday, the sea lion spent all day hunkered down in the woods.

The sticking point for the animal seems to be crossing a road separating the woods from the ocean, Speegle said.

"He has actually gone up to the road and looked at it and retreated," she said.

Scientists hoped building a passageway made of tarps and boards to create a blind, hiding humans from the sea lion, would help put the animal at ease. But it didn't work, Speegle said.

If the sea lion continues to refuse to budge, a veterinarian will be on site Monday to "talk about next steps," Speegle said. Those next steps could include sedating and relocating the animal using heavy equipment.

Scientists want to avoid tranquilizing the sea lion if possible because it's so large — an adult male between 1,500 and 1,700 pounds, she said.

On Twitter, NOAA asked bystanders in the area to give the sea lion a wide berth, Speegle said. The animal has been reported to have lunged toward humans.

Scientists don't know why the animal meandered so far into town. It appears to be healthy, but scientists will conduct tests to see whether the sea lion's suffering from an unseen ailment.

It's very unusual for a sea lion to wander into a town, though it has happened before. In Astoria, Oregon,  a sea lion got a police escort back to the water after it wandered into a parking lot. In Newport Beach, California, a sea lion pup was photographed at the entrance to a bar. Speegle didn't know of any other incidents in Alaska where a sea lion had hauled out this far on land for this long.