How do you solve weird Alaska fish mysteries? This Sitka woman has a Facebook group for that. 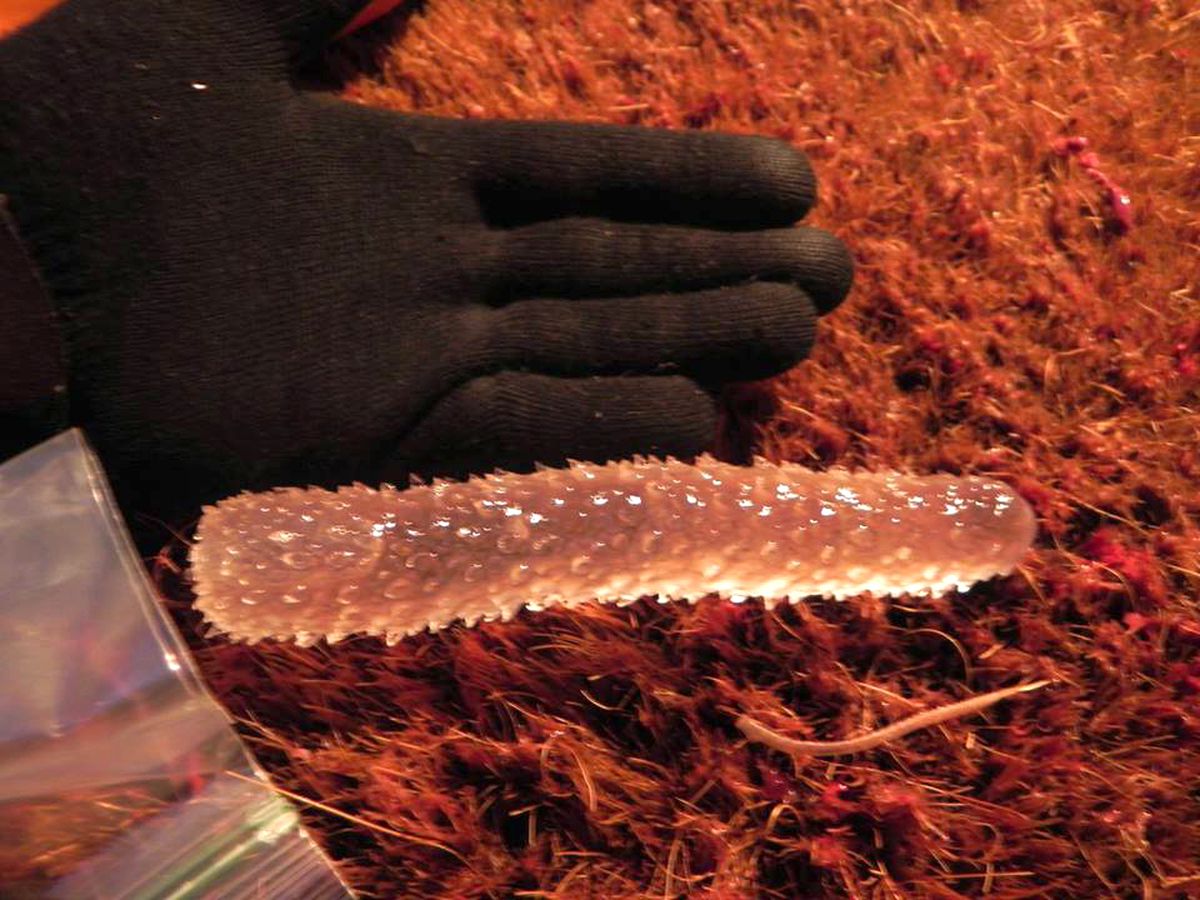 A pyrosome found while longlining near Sitka in March 2017. “They came up at night in large numbers so I used a bucket to catch some,” said Karen Johnson. (Photo courtesy Karen Johnson)

A pyrosome found while longlining near Sitka in March 2017. “They came up at night in large numbers so I used a bucket to catch some,” said Karen Johnson. (Photo courtesy Karen Johnson)

Karen Johnson's brother brought home a pyrosome last January that he'd picked up in the waters off Sitka. In his decades of fishing, he hadn't seen anything quite like it. It looked like translucent, floating pickle. He asked Johnson if she knew what it was.

Johnson, who has fished those waters herself for 45 years, didn't. But after a search on the Internet, she came up with the name of the gelatinous creature: It was a pyrosome — an organism that typically lives in tropical waters and that started showing up in the Pacific Northwest and Alaska. She sent photographs to a state fisheries biologist who confirmed the identification.

That interaction got Johnson thinking: How could she help connect scientists with the fishermen who are regularly out in Alaska waters, plucking all kinds of underwater creatures from the sea? As the climate changes, she said, it felt especially important.

"I started thinking: How do we reach fishermen? Because I know we see interesting things all the time and there's not the connection between scientists and what we see," said Johnson, 51, of Sitka

Caption
A buffalo sculpin caught in Uyak Bay off Kodiak Island with a gillnet in the summer of 2014. (Photo courtesy Ryan Fields)
Wait 1 second to continue.

So Johnson did what any Facebook user can do: She started a group on the social media platform. She titled it "Unusual Marine Life of Alaska: Report, Identify and Learn." She encouraged people to share photographs of any new or unusual ocean dwellers they found in Alaska.

In the past year, Johnson's group of just over 1,200 people has become a hub for photos and conversations about Alaska's sea creatures — the unusual, the slimy and the sometimes grotesque. People find the sea life in all sorts of ways, spotting them in tide pools, pulling them up in nets. The group has also become a place where people post photographs of the unknown sea creatures they've found and, more often than not, get a quick identification from a scientist. Other times, scientists put out requests for observations.

"It's been a really fun group that brings together some experts and hobbyists and commercial fishermen," said Ryan Fields, who grew up fishing in Kodiak and currently lives in California. Fields posted a photograph this summer of an orange-brown fish caught in 2014 near Kodiak Island. Within hours, a biologist identified it as a buffalo sculpin.

Earlier this month, Johnson asked group members to consider reporting any signs of sea star wasting syndrome. Before that, a University of Alaska Fairbanks associate professor asked if anyone had recently seen or caught any juvenile black cod near Sitka.

Government agencies have long relied on people — citizen scientists — to volunteer their time and help with monitoring, said Terry Thompson, statewide communications and outreach coordinator for the Alaska Department of Fish and Game Division of Sport Fish. The explosion of social media has expanded the opportunities for people to report wildlife sightings. People can now take a picture with their phones, immediately post it on Facebook and get feedback, he said.

"There's way more science than can be done by agencies, so what is happening now is more and more citizen science monitoring is going on, and then agencies like Fish and Game will take that information," he said.

There are Facebook groups in Alaska for an array of wildlife sightings, from moose to bears to belugas. Thompson said the more structured the monitoring program, the better. But, he said, the sightings reported online still contribute valuable information that's "added to the knowledge bank."

"It puts things on our radar that we may or may not be aware of," he said.

Aaron Baldwin, a fisheries biologist with Fish and Game in Douglas, said he checks Johnson's marine life group often. Government agencies don't have the resources for around-the-clock field work, he said. The online group allows him to easily and cheaply monitor what's going on in Alaska's waters. It's a space for observations that are new or possibly ecologically important, he said. He also helps identify the creatures, including the pyrosome found by Johnson's brother and the fish posted on the Facebook group by Fields.

"It's a great way to see what's going on — to see these observations right away," he said.

Johnson said she hopes to keep the group going. She credited its growth to the people who take time to share their discoveries and the scientists and others who take time to identify the creatures.

"I can only hope it will continue on as it becomes even more important as climate change and other factors affect the environment," she said.