An eagle crashed through her living room window in Kodiak. Then she had to shoo it out of the house. 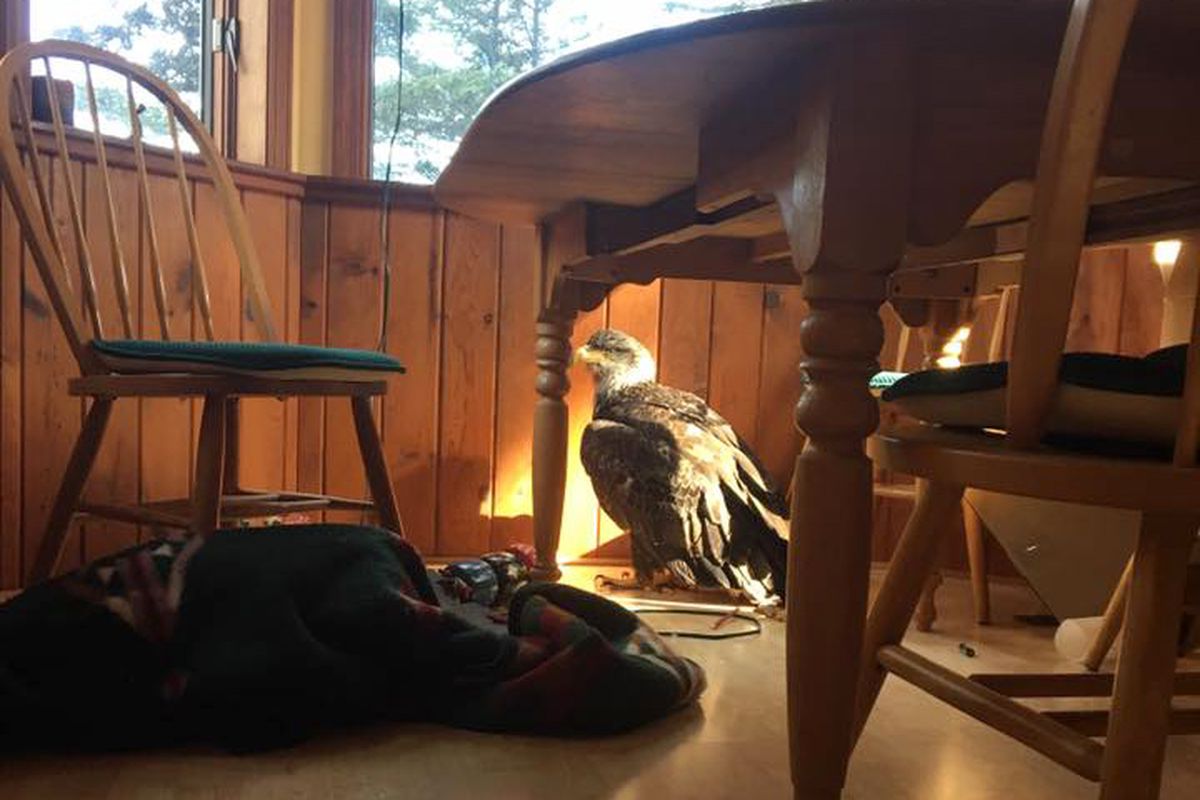 Stacy Studebaker, who lives in Kodiak, spent Saturday afternoon doing yard work and housework. About 4:30 p.m., she got up from a chair in her living room and wandered into the room she uses as an art studio.

“Then I heard this ungodly crash. My first thought was the atomic bomb had dropped and the windows were blown out,” she said. "Then I heard all this screeching.”

Studebaker is a retired high school biology teacher, naturalist and birder. The sound told her what happened before she saw it. A bald eagle. She lives on a bluff above a beach a couple miles out of town on Mill Bay. Eagles are a common sight around her house, seen on occasion carrying rats from the beach, she said. Just before the crash, she’d heard a sound she recognized as a couple of them fighting outside. She peeked into the living room. One of her big picture windows was missing its glass.

“I see there’s this eagle flapping around frantically, clawing at the window sill, banging at stuff. By now glass is everywhere,” she said. “We’re talking an 8-foot wingspan, you know.”

She grabbed a blanket, planning to throw it over the bird. But the eagle didn’t cooperate.

“(It was) sort of semi-flapping through the living room, into the kitchen, taking with it every thing its wings could reach,” she said. “The whole time, it’s just screaming.”

The eagle flapped by the fridge, denuding it of magnets and sending photos whirling. It landed on the kitchen floor. It was immature, with mottled brown feathers, and had a little blood around its beak. She noticed it looked wet and its feathers were disturbed, making it look particularly pathetic. She managed to open up a door leading outside. Then she ducked behind the kitchen island and put in a call to the local U.S. Fish and Wildlife Service biologists. The bird’s talons were huge, she said.

“I was just talking to it really softly, ‘Hey fella, we’re gonna get you out of here,’” she said.

She grabbed her iPad, which happened to be nearby, and snapped a couple of photos.

“I knew nobody was going to believe it unless I took a photo, especially the insurance company,” she said.

A neighbor heard the ruckus and came over. They tried again with the blanket but the eagle winged into the dining room, taking down a shelf of glassware, then settled under the table. They crept toward it. It took off out the open door.

“Then it was just gone,” she said.

[‘Mom, Dad, there’s a bear in my room’: A broken window, a dark figure beside the bed]

What sent the eagle through the window? Picking through the mess afterward, she found a clue.

“When I went through the kitchen, I noticed this big hunk of frozen halibut on the floor. It wasn’t mine,” she said.

It was a freezer-burned slab, about 4 pounds, she said. This time of year people will, on occasion, clean out their freezers of last year’s fish and throw some of the old fish over the bluff for the eagles, she said. Monday morning, after word of her eagle encounter traveled on Facebook, she got a knock at the door. There was a neighbor with a big bouquet of flowers.

The neighbor looked very sheepish and promised never to put her fish out again, Studebaker said.

“She said she didn’t know how old that halibut was but it was old, from way down at the bottom of the freezer,” she said.

Studebaker guessed that the bird grabbed the piece and was fleeing from another eagle. The piece was heavy, and that might have made the eagle less nimble, she said.

“Our window might have looked like a shortcut to get away from this other eagle," she said. “But he miscalculated. He definitely miscalculated.”