This rare duck from Asia is causing a stir among birders. How it got to Anchorage is a mystery. 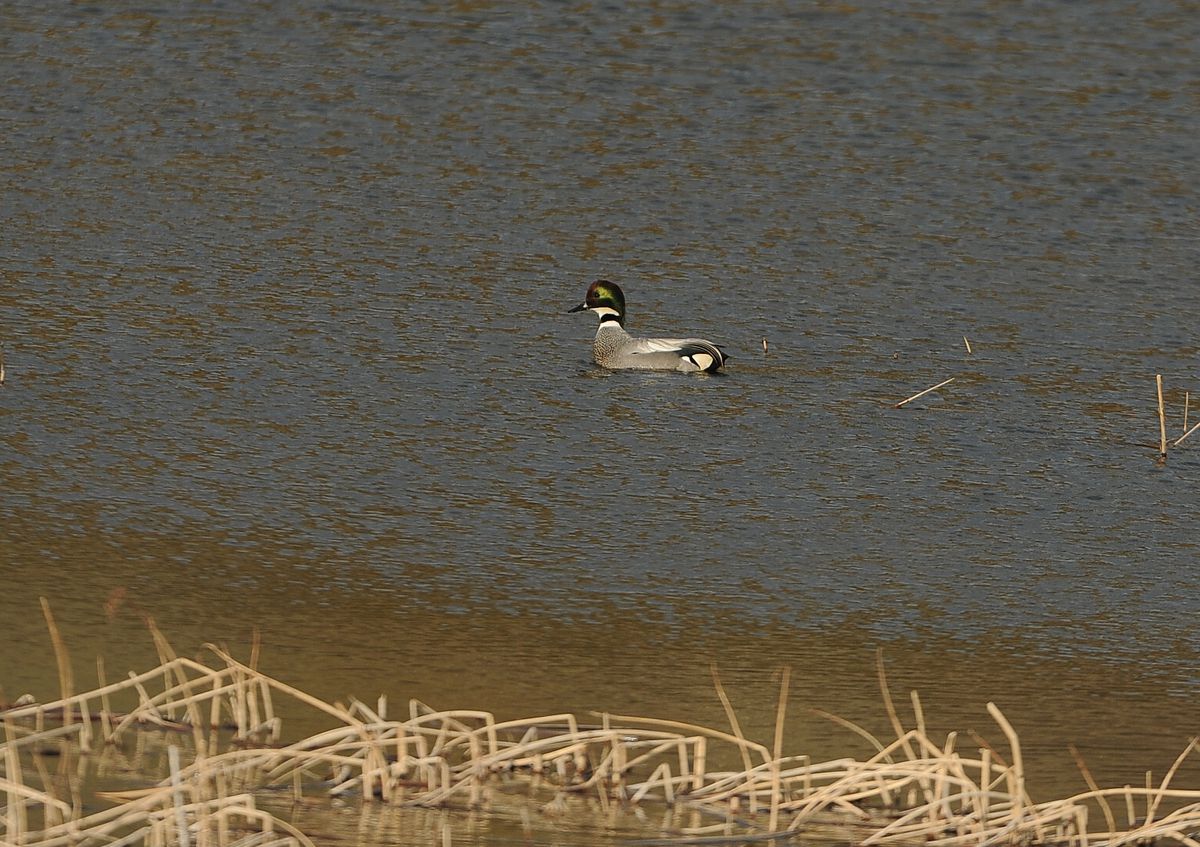 A falcated duck visits Potter Marsh along the Seward Highway in Anchorage on Saturday May 4, 2019. (Photo by Bob Hallinen)

A falcated duck visits Potter Marsh along the Seward Highway in Anchorage on Saturday May 4, 2019. (Photo by Bob Hallinen)

Tasha DiMarzio couldn’t believe it was actually there.

She had been sure the report of a falcated duck on Potter Marsh last Friday would turn out to be a farce.

Then she saw it with her own eyes: the iridescent green and plum-colored feathers of the Asian fowl.

DiMarzio, a waterfowl technician for Alaska Department of Fish and Game, said falcated ducks are only rarely spotted in the Pribilof and Aleutian islands like Attu, nearly 1,500 air miles from Anchorage. A report of one at the south end of Alaska’s largest city seemed incredible. But the bird before her represented the first confirmed report of a falcated duck on mainland Alaska ever.

“At that point, I was alone and freaking out,” she said. “I texted everyone I knew.”

DiMarzio posted about the duck on Facebook. Emails were sent. Some Alaska birders are also connected by a phone tree, DiMarzio said, and calls started going out. Within an hour, people were streaming into the area, she said.

It’s rare to see a falcated duck anywhere in North America, and suddenly one arrived right off the busy Seward Highway, at Anchorage’s 564-acre wetland.

“So this bird — not only is it a male with absolutely gorgeous breeding plumage — but then it shows up at one of the most common wetlands in Alaska, where people don’t have to walk to go see it,” DiMarzio said. “You can literally pull up and look at it from your car.”

Birders flocked to Potter Marsh over the weekend, and continued to line stretches of the roadways near the marsh nearly a week later. Some have driven in from outside of Anchorage or even flown in from out of state, said Joe Meehan, Fish and Game lands and refuge program coordinator.

Some birders keep what they call “life lists,” a record of all the bird species they’ve seen, and this duck was a good get, DiMarzio said.

“I’ve heard of one person who drove down from Fairbanks for seven hours, saw the bird, turned right around and went back home,” Meehan said.

On Thursday morning, Patti Saunders spotted the duck at Potter Marsh, through the reeds and tall grass, before going to work.

“I can’t tell you how excited I am,” she said, as she stood near the marsh with a small group of other birders, recounting the sighting. “He popped his head up and I could see that sort of cinnamon-brown with the green sheen. I mean, it was so distinctive… I didn’t get to see the feathers, but I saw the head and I know that was him.”

The word falcate means “hooked or curved like a sickle” and for the duck it refers to its long, curved wing feathers.

So what’s this falcated duck doing in Alaska anyway?

It’s impossible to know for sure, biologists say.

The ducks are migratory. Among the places they’re found: parts of Siberia, Mongolia, China, Japan and the Kuril Islands, said David Safine, a wildlife biologist in Anchorage for the U.S. Fish and Wildlife Service.

Safine and DiMarzio said it’s possible this falcated duck got caught in a windstorm during migration and was blown off course, eventually landing in Potter Marsh.

“There are really strong winds that are blowing easterly that would just blow him right across the Bering Sea,” DiMarzio said.

Or, Safine said, maybe the bird wandered over to North America during fall migration, wintered somewhere south of Alaska and moved north with other ducks in the spring.

It’s also possible the duck escaped from some sort of private aviary in another state, Safine said, and migrated north with another duck species such as the American wigeon. But there are no leg bands on the bird, so the chances of it being a captive bird are slim, DiMarzio said.

But it’s here now and it’s mating season and there are no other falcated ducks around, DiMarzio said.

“So that’s why when we see him, he’s courting an American wigeon,” she said.

American wigeons are a similar size, she said. It and the falcated duck are also both species of dabbling duck, a group of ducks that typically feed by dipping headfirst into the water, Safine said.

It’s possible the falcated duck will try to mate with an American widgeon, Safine said.

Or, it’ll say, “Hey, I don’t see any falcated duck females here, I have no options for nesting. I’m going to head back west,” Safine said.

Safine said he would guess the falcated duck won’t stick around Potter Marsh too long.

“My thinking is if you want to see something cool, go check it out now,” he said.