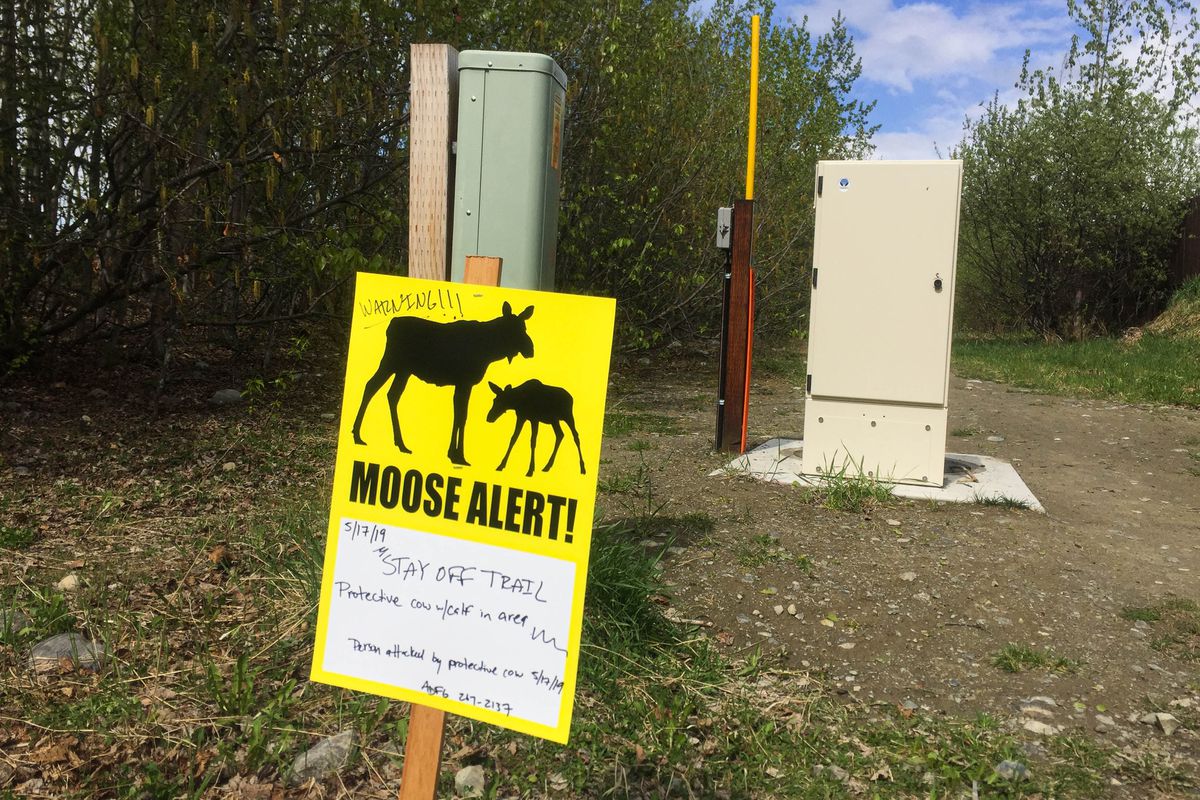 A sign warns people to stay off a trail near the Eaglewood neighborhood in Eagle River on Friday, May 17. (Matt Tunseth / Chugiak-Eagle River Star)

A sign warns people to stay off a trail near the Eaglewood neighborhood in Eagle River on Friday, May 17. (Matt Tunseth / Chugiak-Eagle River Star)

Tony Petito didn’t believe it at first. He pulled his vehicle up to a man who was lying in the grass and yelling for help in Eagle River Friday afternoon.

Then the man rolled over. His hands and arms were covered in blood.

Police got the call around 12:20 p.m. The man, who police have not identified, was taken to a local hospital with significant injuries, said MJ Thim, a spokesman for the Anchorage Police Department.

Officers discovered that the man and his dog were walking on a trail, on the edge of the Eaglewood neighborhood, when they got between a cow moose and its calf, Thim said.

"She reacted as any mama moose would in this situation and was trying to eliminate a perceived threat and attacked the victim,” he said.

Thim said he didn’t have additional details Friday about the man’s injuries. He said there was no indication the man’s dog was attacked.

It’s moose calving season in Southcentral Alaska and cow moose are particularly protective of their young. Calving season peaks around May 25 and goes into early June, according to Fish and Game.

"When you walk up to a cow moose this time of year, within 10 feet of her and her calves, you're likely to get charged,” said Dave Battle, area wildlife biologist with Fish and Game.

The man on Friday was walking along a gravel trail that runs along a fence line near the intersection of Montague Loop and Andreanof Drive. The area is a hot spot for moose. The brushy trails provide food for the cow moose and enough cover for its calves, Battle said. In 2017, an aggressive moose attacked and injured four people in the same area. Fish and Game later killed the moose.

Fish and Game officials didn’t find the cow moose Friday in a sweep of the area, Battle said. They put up yellow signs that warned people to stay off the trail.

Since newborn calves can’t run from pets or people on bicycles, cow moose are likely to stand their ground even if they hear you coming down the trail, he said.