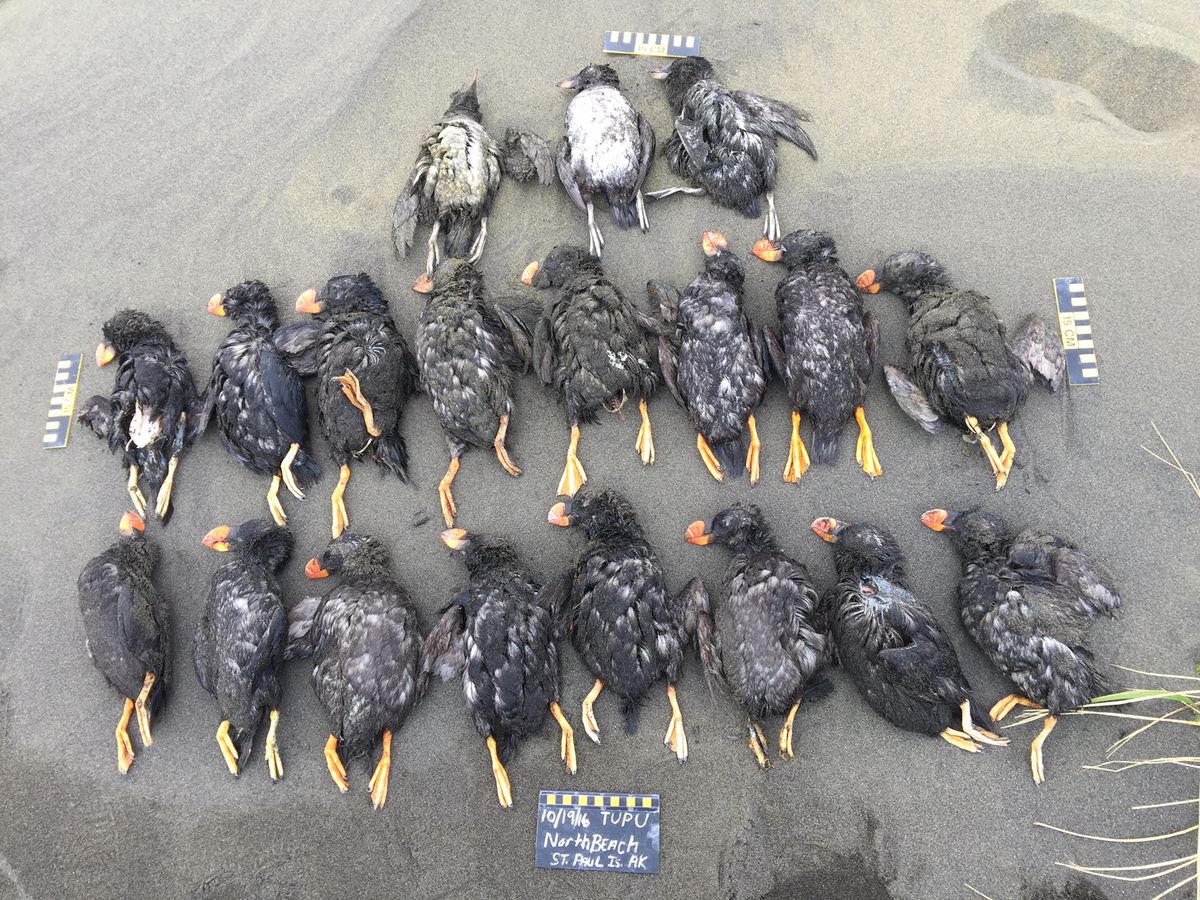 For months beginning in October 2016, carcasses of tufted puffins turned up one after another on the shores of St. Paul Island, a tiny Alaskan outpost in the southern Bering Sea.

"It was very apparent that something strange was happening. They just keep washing in and washing in," said Laura Divine, director of the Aleut Community of St. Paul Ecosystem Conservation Office, who helped oversee the collection of the birds. "Every person in our community knew something was wrong."

The odd-looking seabirds - with their rounded heads, golden head plumes and distinctive bright orange bills - typically migrate south to warmer waters that late in the year, so having any puffins wash ashore was rare enough. But the arrival of hundreds of emaciated puffin carcasses, as well as of a second species known as the Crested auklet, alarmed and astonished local residents and scientists.

"Part of the mystery is what in the heck were those guys doing there? Why hadn't they left? ... That means there's something going on in the system that's not too good," said Julia Parrish, a professor at the University of Washington who also runs a large citizen-science project known as the Coastal Observation and Seabird Survey Team, or COASST. "We know month in and month out what is normal, what to expect."

The mass die-off of the widely beloved birds off Alaska was anything but normal -- even as it is one of a growing number of "mass mortality events" affecting seabirds in recent years.

Parrish and a group of colleagues used weather data to estimate that between 3,150 and 8,500 birds probably died, most likely from starvation. In a paper published Wednesday in the journal PLOS One, the authors theorize the die-off is at least partially attributable to the changing climate.

“This mortality event represents one of multiple seabird mortality events that have occurred in the Northeast Pacific from 2014 to 2018, cumulatively suggestive of broad-scale ecosystem change,” they write. Such episodes, they add, “are indicators of a changing world, and particularly of climate change.”

Tufted puffins breed in the Bering Sea off the Alaskan coast, feeding on various fish and marine invertebrates, which themselves rely on plankton for food. But several years of significant warming and a reduction in sea ice has resulted in troubling changes, such as the migration of certain "forage fish" such as capelin, juvenile Pollack and other energy-rich prey that puffins and other birds depend on to survive.

The authors suggest the climate-fueled shifts that likely affected the food supply, as well as the fact the birds were in molt - a process that replaces their feathers but also hinders their ability to fly - ultimately doomed the puffins that washed ashore on St. Paul Island.

Similar circumstances appear to have fueled an unprecedented die-off of Common Murres - a thin-billed sea bird - between 2015 and into early 2016 off Alaska and other parts of the U.S. Pacific coast. The following year, another seabird die-off happened in the Bering and Chukchi seas of Alaska and Russia, affecting Northern Fulmars, Short-tailed Shearwaters and other species.

In fact, 2018 marked the third year in a row that scientists documented "massive" seabird die-offs, according to the National Park Service.

"Seabirds are good indicators of ocean ecosystem health. Recent mortality events are concerning in that they may be pointing to significant changes in marine ecosystems," the agency wrote in an update late last year.

As recently as this month, dead and dying Common Murres have been reported along the Mendocino County coastline in California, though the cause of that die-off remains undetermined.

"We are now just bracing for what is going to wash in next," Divine said. "It's kind of terrifying."

Such episodes have also unfolded elsewhere in the world in recent years.

In the Gulf of Maine, puffins have been found dying of starvation and losing body weight - although scientists there have helped aid breeding in an effort to boost populations. Across the Atlantic, puffin populations also have been in decline, partly due to human factors such as hunting, but also, scientists say, because of changes to food supplies.

Wednesday's study also comes on the heels of a United Nations report earlier this month, which found that roughly one million plant and animal species are on the verge of extinction, with alarming implications for human survival. That report by seven lead co-authors from universities across the world goes further than previous studies by directly linking the loss of species to human activity. It also detailed how those losses are undermining food and water security, as well as human health.

Parrish acknowledged that many questions remain about precisely what led to the puffin die-off in 2016, as well as others documented before and since.

The reality, she said, isn't so simple when it comes to figuring out all the forces shaping a complex ecosystem such as the Bering Sea. But she said that each die-off offers clues that significant changes are underway, and that more troubling patterns might lie ahead.

“Each one of those is like a bell going off,” she said. “And there’s been a lot of ringing lately.”