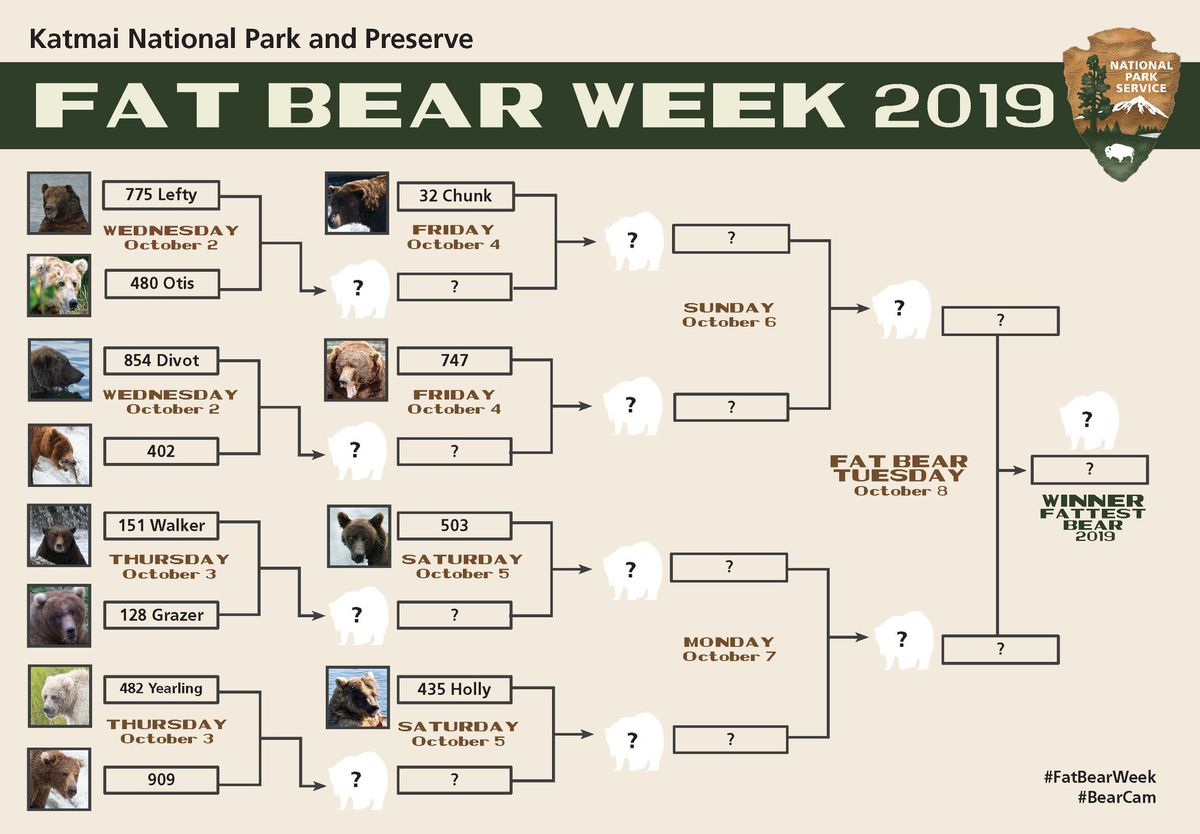 Fans can begin voting for the burliest bear Wednesday on the park’s Facebook page, with the crowning of the heftiest bruin scheduled for the evening of Oct. 8. A dozen of the park’s nearly 2,000 brown bears have been placed in a bracket for the elimination-style tournament, with four of the larger bears getting a bye in the first round.

The first match will be posted on Facebook at 6 a.m. Alaska time, with the second match starting at noon. Photos of each of the bears will be posted, and voters will need to “like” a photo to cast a vote. Results of the daily bear bouts will be posted around 6 p.m. on the day of the match.

[From 2018: America’s fattest bear has been crowned in Alaska]

The Fat Bear Week bracket this year includes a diverse collection of Katmai’s bears, from fan favorites to younger bears working up the social ladder.

“Each one of these bears tells a different story about bears in the bear world,” said Mike Fitz, a resident naturalist with Explore — the nonprofit that partners with Katmai National Park to provide a live stream of the bears — and a former Katmai park ranger.

A popular 22- to 23-year-old bear named 480 Otis will compete against 775 Lefty in the first match Wednesday. Otis is known for his “office” below Brooks Falls, where he waits to catch salmon. Lefty prefers to spend his hours fishing at the top of the iconic falls, catching salmon as they leap toward him.

For the third year in a row, Fitz has selected “a truly titanic bear," 747, as the winner of his bracket. Fitz said he thinks 747 is about as big as a brown bear can get, and even though 747 did not win the last two years — maybe because of a bad camera angle — Fitz still thinks the dominant bear has a chance to win this year.

The winner of last year’s Fat Bear Week, a sow named 409 Beadnose, was shown sitting down in her tournament photo. The camera angle sparked controversy online as Beadnose’s competitors appeared more svelte in their standing photos.

To even out the competition, the park was “very careful to get all profile pictures this year,” said Naomi Boak, a ranger with the Katmai Conservancy who works at the park.

The drama around 23-year-old Beadnose continued this summer when enthusiastic followers of Explore’s Katmai brown bear cams noticed she hadn’t shown up to the seafood buffet that is the Brooks River. Rangers don’t know where Beadnose is, and anything could have happened to the older bear, Boak said.

“The reigning champion has declined to participate,” she said.

After Bristol Bay’s record salmon run last year, Boak said she thought some of bears still looked fat this spring. Bears can lose 33% of their fall body weight while hibernating.

To prepare for hibernation, the Katmai brown bears eat a variety of foods, including sedges, berries and clams, but salmon account for most of the calories. During this year’s abnormally warm summer, Boak didn’t count a single fish jumping in the river on July 4, when there are typically 300 to 400 salmon spotted every minute. Boak and Fitz said the salmon returned once the weather cooled.

Nineteen million unique viewers from around the globe have viewed the Katmai bear cams this season, according to Boak. To help fans identify Katmai’s celebrities, the park has created a “Bears of Brooks River 2019” ebook. (The fat bears of Katmai are so popular that there’s now even a beer from Anchorage Brewing Co. named in their honor.)

“The brown bears are a symbol of Katmai and Bristol Bay’s healthy ecosystem," Fitz said, "and serve as a reminder why we need to support sustainable fisheries and wild areas like Alaska’s national parks.