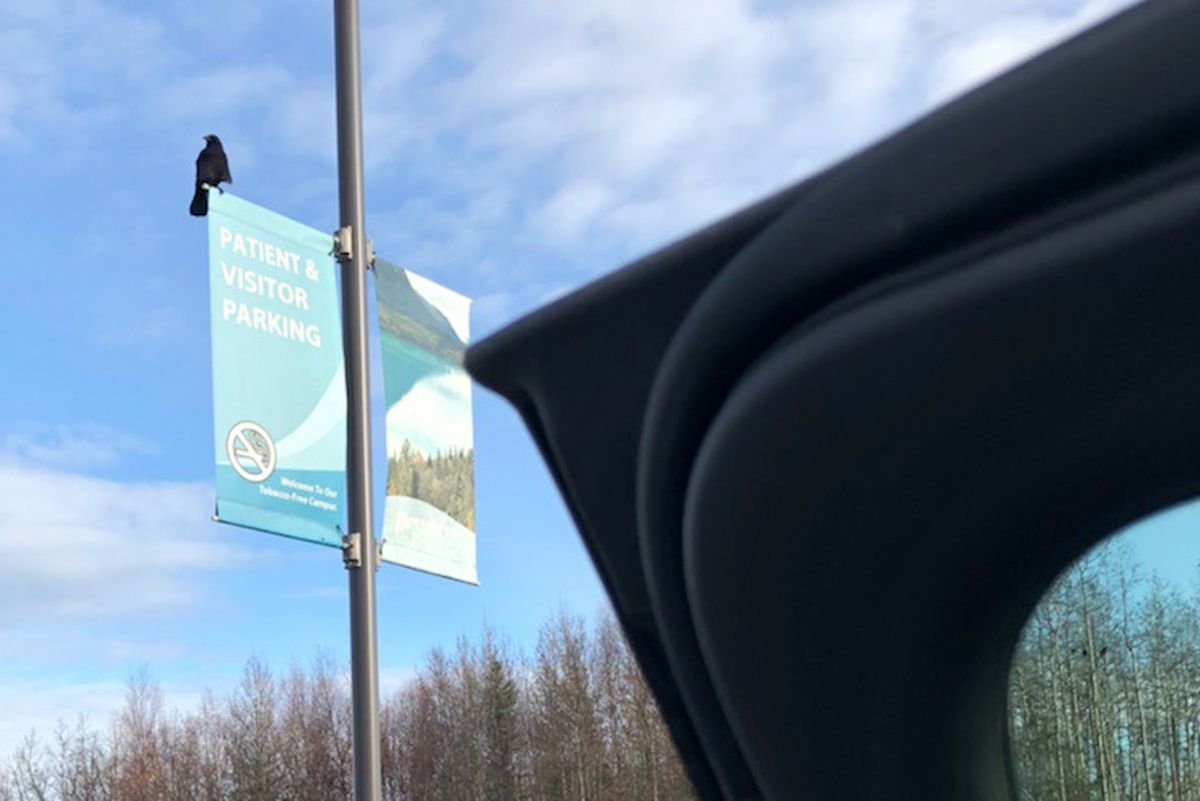 A crow or raven sits atop a sign post in the parking lot of the Central Peninsula Hospital after allegedly dropping a rock on the roof of a pickup truck. (Photo by Cathy McDaniel)

A crow or raven sits atop a sign post in the parking lot of the Central Peninsula Hospital after allegedly dropping a rock on the roof of a pickup truck. (Photo by Cathy McDaniel)

But sometimes all that natural intelligence and curiosity can take a criminal turn.

Keith Randall, the hospital’s security manager, heard about the spate of broken windshields, rear windows and sunroofs and figured he was dealing with a vandalism problem.

Randall quickly realized he was. But it wasn’t humans doing the damage. The evidence pointed to black birds “observed over a period of time picking up rocks and dropping 'em into the parking lot,” he said last week. “Multiple people have said, ‘Oh yeah, I’ve seen them do that before.’”

Off-duty nurse Cathy McDaniel was killing time in her pickup eating McDonald’s french fries and texting her husband when she heard a giant boom, like somebody had shot the roof. She climbed out onto the step of her 2018 Chevrolet Silverado and peered up.

McDaniel saw a rock. She saw her shattered sunroof. She tossed the rock on the ground -- and saw a black bird fly down, pick it up, and fly off with it.

“This raven was sitting on top of the light pole,” McDaniel recalled Friday in a twang that reflected her move from Oklahoma last year. “I’m like, ‘Well, you dirty dog you!' ”

She texted her husband. Then she called her insurance company and said, “I am not drinking. I am not drunk. I am sitting in the parking lot and you’re not going to believe this.”

The hospital posted a Facebook story about the rock-wielding birds. Several commenters shared stories of their own encounters with ravens.

One said he had heard about raven “funerals” and picked up a road-killed bird to see what would happen. He left the carcass in the back of his pickup. When he came back out, 50 ravens surrounded the house, "and they were all staring at me but making very little noise. I never screwed with them again.”

Someone else watched the birds drop a jar of peanut butter on a pickup and “then they started going crazy on it” and spread the light brown goo all over the front of the truck.

The bird that targeted McDaniel’s pickup did $1,000 in damage, she said. Insurance will cover half.

It may have been a raven, or could have been a crow. The smaller cousins of the burly raven are moving north. They were first spotted in Homer in the early 1970s, and there are now 80 to 100 crows in the Soldotna area in winter, according to Todd Eskelin, a wildlife biologist at the Kenai National Wildlife Refuge.

There really isn’t a logical explanation for the birds’ behavior beyond their being bright and looking for new ways to occupy time, the biologist says.

Anchorage wildlife biologist Rick Sinnott is more skeptical that birds are to blame.

If no one actually saw a crow or raven dropping rocks that damaged the auto glass, Sinnott wrote in an email Monday, “I would suspect a pre-teen who was blaming the corvids. I can’t think of a reason for a raven or crow to break a car windshield unless a) they had broken a window with plate glass that allowed them access to food (chicken eggs, animal feed) or b) they are doing it for the sheer hell of it.”

At least one documented corvid rock-chucking incident falls into the latter category.

A crow perched on the roof of a central London hotel last year just missed a car as it tossed stones to the pavement below, according to a story in the Daily Mail. A behavioral ecologist told The Globe and Mail that it may be “juvenile delinquency” that prompts mischievous behavior in general: Crows don’t become adults until they’re 2 years old.

Ravens and crows, members of the corvidae family, are known for intelligence. They can problem-solve, use tools, and make as many as 30 calls. Ravens are known as shape-shifting tricksters in Alaska Native and Northwest tribal stories. Some of them say it was raven who brought people the sun and fire, the source of his croaky voice and sooty feathers.

Ravens and crows are protected under the Migratory Bird Treaty Act. Killing them is a federal crime.

It’s common to see a Kenai Peninsula business “just being plagued by a couple of ravens” for a period of time, like the Harley-Davidson motorcycle shop on the Sterling Highway where the birds did thousands of dollars in damage picking at the trim on new motorcycles, Eskelin said.

“They are smart birds,” he said. “Typically, I see they get hung up on something like this for a little while and then they’ll get bored and move to some other shenanigans.”

Another Soldotna business last year had its turn with destructive ravens and no apparent motive.

“We have this one really large bird. And it’s got little minions that follow it around,” said Amanda Scaggs, a customer service representative at Lynden Transport, where ravens perch atop light poles facing the Sterling Highway. “The one really big one sits on top of that post and I swear to God he makes calls to the little ones.”

The big bird apparently sat in front of Lynden’s door and clawed at its own reflection overnight, given the scratch marks and waste left in the morning, Scaggs said. Weatherstripping disappeared from several windows and a door. One employee had the windshield wipers torn off his brand-new pickup.

Three scarecrows spooked the bird away from the building entrance. Then a new problem started. Employees heard noise on the roof and checked their upgraded camera system.

“They see a bunch of these birds. We had an open vent on the top of our building. The birds were dropping these rocks inside. ... I don’t even know what the opening is to. But they’re dropping rocks into our building,” Scaggs said. “It’s like a coup.”

Back at the hospital, security manager Randall has tried putting out a big fake owl, but the birds saw right through that. He’s read that “hanging crows in effigy” can spook them, so was researching places to buy fake crows. Eskelin, the biologist, gave him contact information for federal wildlife control officers and suggested the hospital “remove the ammunition” by cleaning up any rock gardens. Maybe once snow covers the rocks, they won’t be as appealing.

There haven’t been any break-ins — yet.

“We have not observed a bird in a vehicle,” Randall said. “Maybe that’s their next move, I don’t know.”