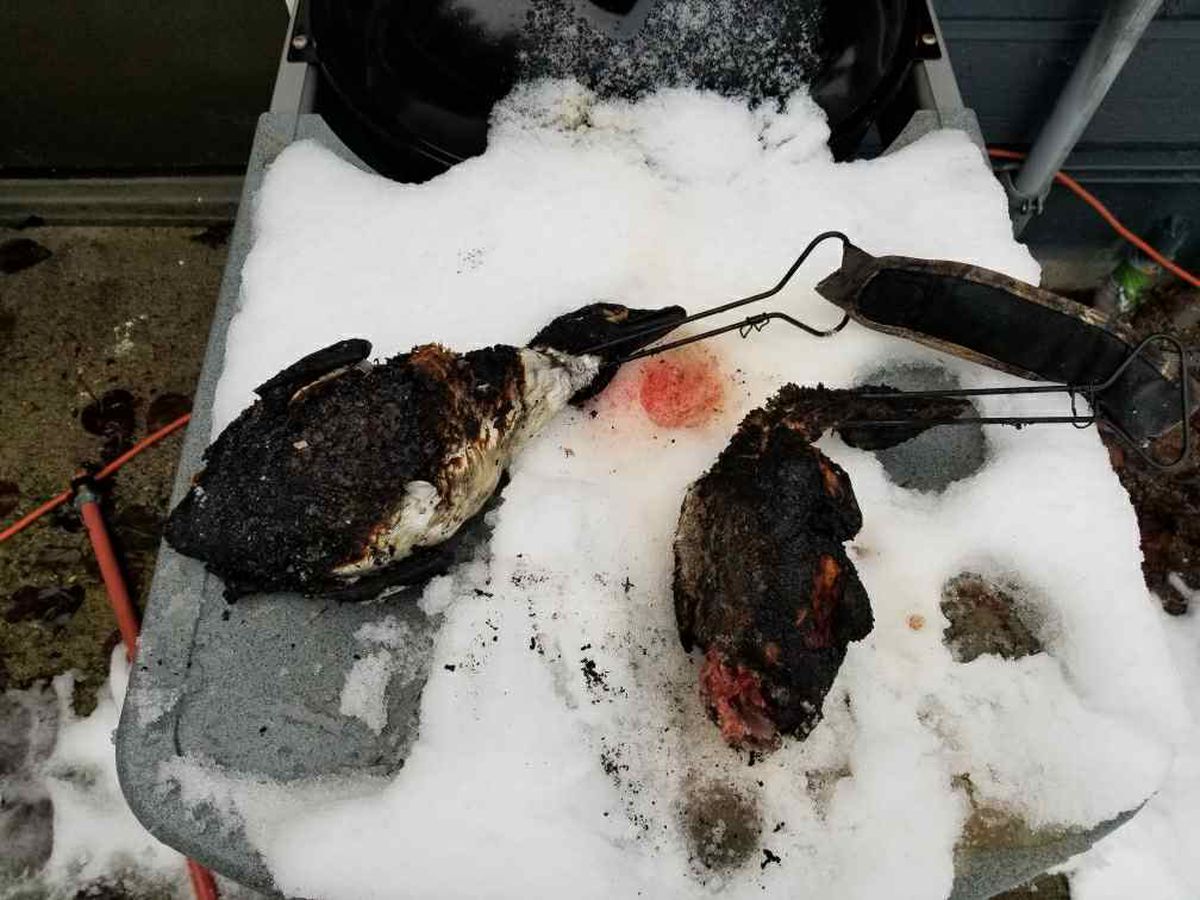 JUNEAU -- Brad Austin was drinking coffee and getting ready for work Friday morning when he heard a strange popping sound, like metal in a clothes dryer.

The Juneau resident caught sight of an orange glow through a window. He poked his head out a side door and saw his front porch on fire.

As he made a hurried call to 911, a fire extinguisher and garden hose got involved. After firefighters arrived, they found the fire’s cause: A pair of dead ducks hanging from his porch light.

“It was definitely an unusual fire,” said Rich Etheridge, chief of Capital City Fire/Rescue, Juneau’s fire department. “It took them a little while to figure out what had happened.”

Austin’s 26-year-old son, Lyman, is an avid duck hunter and frequently brings his catch back home for drying and butchering. But last year, the family painted their home, and at that time, they pulled the nails where Lyman usually hung his ducks.

With the nails gone, he started hanging them from the porch light fixture using a nylon strap. That wasn’t a problem until Thursday night, when the family left the light on overnight.

“That was the big thing. I think I had gone to bed first and he hadn’t turned the light off,” Austin said.

According to firefighters’ account of events, the ducks’ waterlogged feathers dried out and began to smolder. At a certain point, the natural oils in the ducks’ feathers ignited, turning into wicks for duck-scented candles as fire consumed the ducks’ fat.

The flames ignited the home’s wood siding and sent fire toward the eaves. The burning ducks melted through their hanging strap, landing on a rubber doormat that also caught fire.

As Austin fought the fire, he shouted for his son to get out of the shower, grab their dogs and get out of the house. None were hurt. The fire was confined to the home’s entryway, which Austin said he had wanted to remodel anyway.

“That’s why we can laugh at it. It’s not like half of my house burned down,” Austin said.

Juneau fire marshal Dan Jager said the situation could have been more serious if the family had been asleep or away from the home. The house did not have installed smoke detectors, and there are no nearby neighbors.

Deputy fire chief Travis Mead said the older home’s construction also inhibited the spread of the fire, and a newer home would not have fared as well.

But because it did, Mead said, he and other firefighters have been able to joke about the incident.

“I told (Jager) even before I left that it was a fowl incident, and the puns have not stopped since,” Mead said.

Austin said he’s gotten “a lot of crap” from his friends over the incident, and if there’s a lesson to be learned, it’s to not hang things from lights.

As for the ducks, Austin still has them.

“I gotta tell you, I didn’t eat the ducks even though they looked like they were cooked pretty well,” he said.