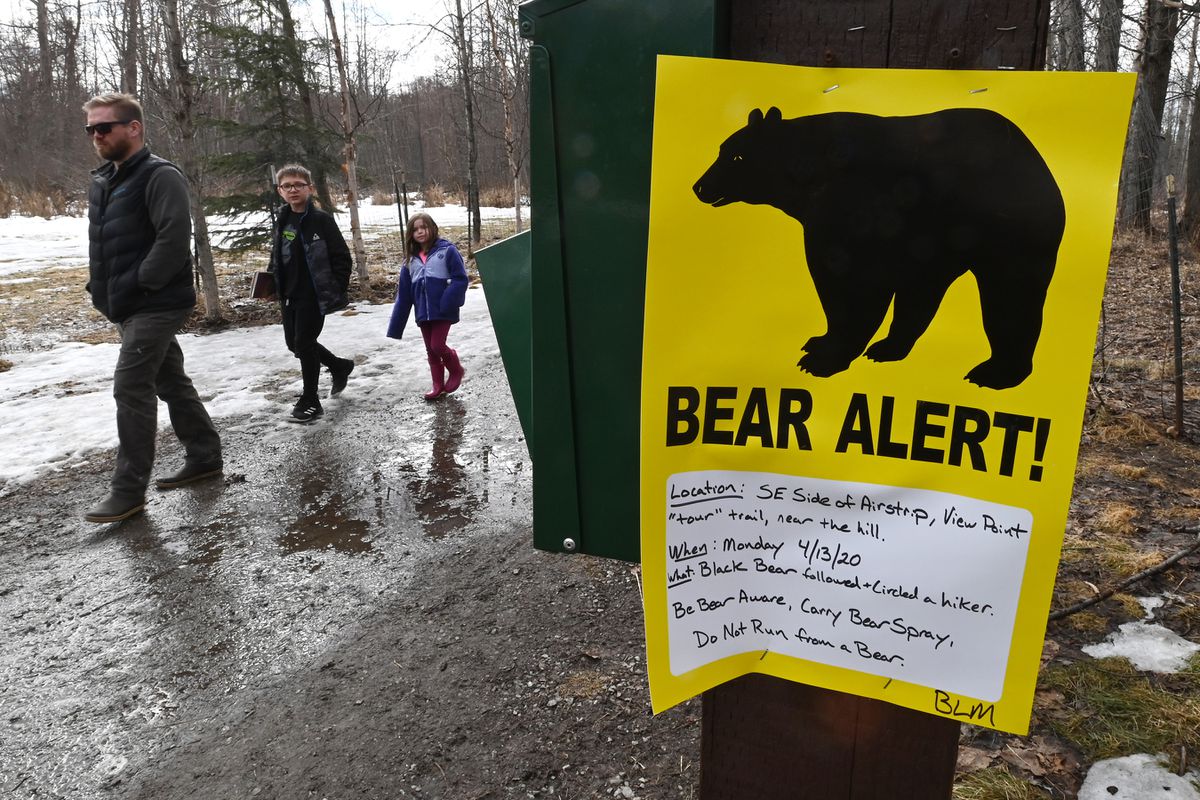 A family walks past a sign posted at the BLM Campbell Tract on Sunday, April 19, 2020. The sign stated the location of the sighting of black bear that "followed and circled a hiker" last Monday. The sign also advises people to "Be Bear Aware. Carry Bear Spray. Do Not Run from a Bear." (Bill Roth / ADN)

A family walks past a sign posted at the BLM Campbell Tract on Sunday, April 19, 2020. The sign stated the location of the sighting of black bear that "followed and circled a hiker" last Monday. The sign also advises people to "Be Bear Aware. Carry Bear Spray. Do Not Run from a Bear." (Bill Roth / ADN)

As the season turns to spring, bear sightings have been reported throughout Anchorage, and two people have been chased, a local biologist said.

A hiker encountered a black bear on the Campbell Airstrip Trail last week and ran from it, said Dave Battle, Department of Fish and Game biologist. The bear chased and eventually circled the man before the hiker was able to make it back to his car.

Another man was running when he encountered a bear on the north end of Abbott Road last week, Battle said. The runner saw the bear and crossed the street. The man thought the bear was not paying attention to him, but Battle said it may have been triggered when it saw him running and decided to chase.

A driver stopped to help scare away the animal and the runner was not injured.

Bear sightings have been reported over the past few weeks, according to Battle. Most bears generally wake up near the end of April and the beginning of May in the Anchorage area, Battle said. Battle said they’re common near the north end of Muldoon Road, Eagle River, Kincaid Park, South Anchorage and along the border of Joint Base Elmendorf-Richardson.

Battle said the most important thing people need to remember to do if they encounter a bear is to stand their ground and never to run. Battle said bear spray should be kept in an easily-accessible place on a person’s body when they are recreating outdoors.

“Make yourself seem big, ready your bear spray and talk to the bear in a calm voice and let it know what you are,” he said. “If you see the bear from a distance, you can start to move away slowly, but if the bear comes toward you or starts to follow you, do not continue to move away from it. Stand your ground — very often the bears just curious.”

While attacks do happen, Battle said they are not common and mostly occur on trails or in the woods. There were no maulings last year but there were fatal attacks during 2018 and 2017, he said. The highest number of maulings in a year in the year is four.

Bears will come into residential areas when there is unsecured trash or other attractants, like bird feeders. Battle said residents should store their garbage in a garage or secure building, but can get bear-resistant containers if that isn’t an option.

Battle said he expects that the pandemic will impact the type of bear reports that the Department of Fish and Game receives because more people are home during the day. He said he thinks more people will be home to see bears approach their trash cans and he hopes it will encourage them to secure their garbage.

“That is absolutely what draws bears into the neighborhoods,” he said. “If we get everybody to put heir trash in a bear-resistant container or in the garage, I think my phone would just about stop ringing.”