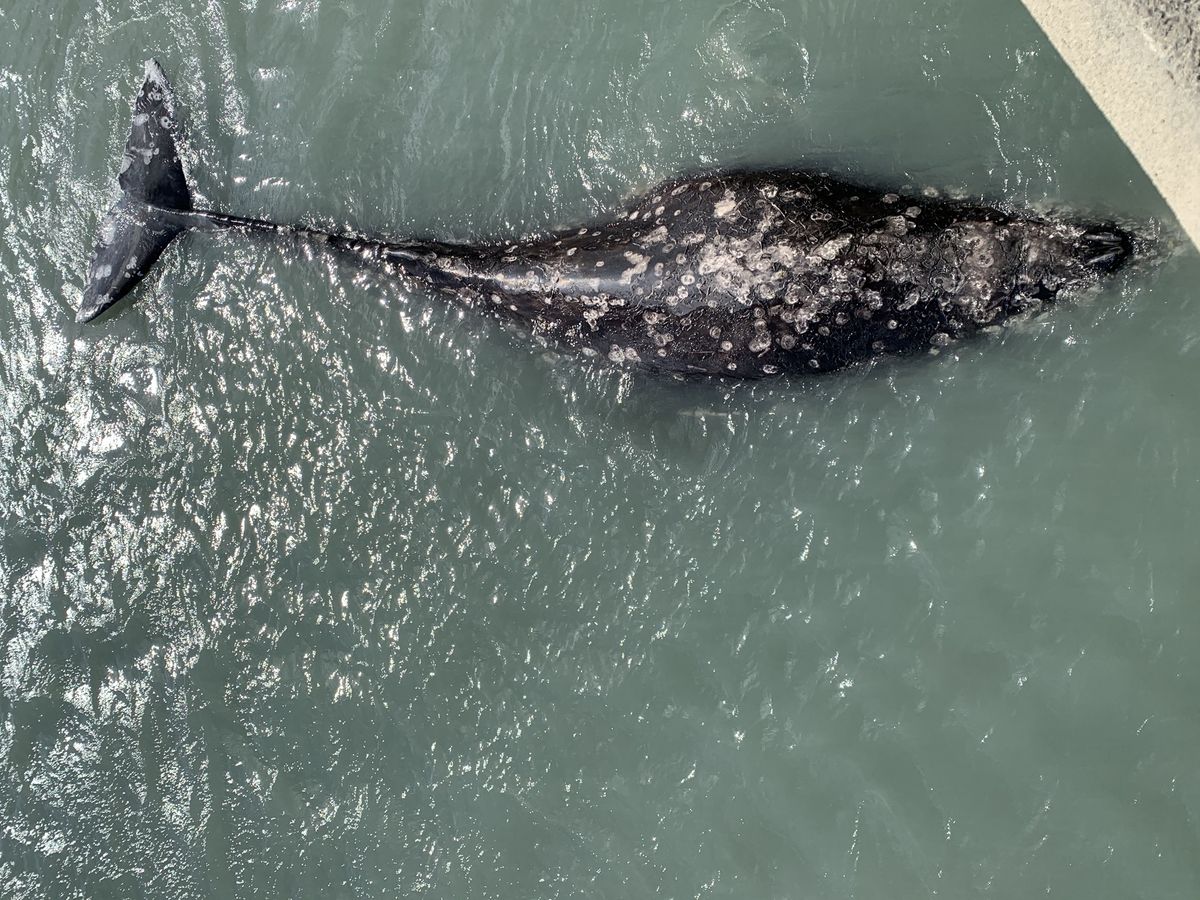 A young gray whale that was stuck in Twentymile River for a week was able to swim back into the Turnagain Arm during high tide on Wednesday. It's shown here under the Twentymile bridge on the Seward Highway. (Courtesy of Julie Speegle / NOAA)

A young gray whale that was stuck in Twentymile River for a week was able to swim back into the Turnagain Arm during high tide on Wednesday. It's shown here under the Twentymile bridge on the Seward Highway. (Courtesy of Julie Speegle / NOAA)

A young gray whale that was stuck in Twentymile River for a week made its way back into Turnagain Arm on Wednesday evening, Alaska biologists said.

The juvenile whale was first spotted along Turnagain Arm on May 25. Officials worried it was injured or sick because it was reported swimming in circles along the shore, said Julie Speegle, a spokeswoman for NOAA Fisheries in Alaska.

Speegle said they hoped the whale would swim out into deeper waters as the tide rose on May 27, but instead it swam into Twentymile River, where it remained until Wednesday night.

Speegle said it had likely wandered into the river either to feed on hooligan or because it was sick.

The whale was trapped in a small but deep portion of the river, just over a mile upriver from Twentymile Bridge on the Seward Highway. The river is shallow in many places, which made it impossible for the whale to free itself during low tide. The whale had an area 500 to 600 yards long in which to swim.

Crews from the Girdwood Fire Department and the National Oceanic and Atmospheric Administration checked on the whale through the week, trying to get photos and videos that would allow them to better assess its health. Speegle said they determined the whale is 27 to 30 feet long and appeared to be in poor or fair condition Wednesday. Gray whales can grow up to 49 feet long and weigh roughly 90,000 pounds.

Officials watched the whale Wednesday as the tide raised water levels in the river. Speegle said around 6:30 p.m., it was able to work its way free and turn around to swim out of the river. Officials kept viewers off the Twentymile Bridge and the boat ramp was closed to avoid spooking or stressing the whale.

As the whale returned to Turnagain Arm, it passed the Placer River and was on the side of the arm closer to Hope around 7 p.m., Speegle said. Crews looked for the whale in Turnagain Arm on Thursday but did not see it.

The public can report any sightings of the whale or any stranded or injured marine mammal to NOAA’s hotline at 877-925-7773.

Gray whales are not common in Cook Inlet, but Speegle said they have shown up throughout the years. The inlet is known for swift tides, narrow channels and shallow water, which make it less than ideal for bigger whale species. Two gray whales died in Turnagain Arm by this time last year.

Gray whales migrate 5,000 to 7,000 miles from Mexico and Southern California annually to Alaska, where they feed in the shallow waters of the Bering and Chukchi seas for the summer. The migration runs late February to May and Speegle said gray whales have been spotted this year in Alaska from Craig to Kodiak.

There was a significant spike in gray whale deaths last year, which caused the department to launch an investigation into the “unusual mortality event." More than 120 gray whales died along the North American coast last year and 48 were stranded in Alaska, according to NOAA data. The investigation will try to determine why so many whales are suddenly dying. Preliminary necropsies of some indicated they were emaciated.

Four gray whales have died so far this year, near Anchor Point, Point Heiden, Yakutat and Cordova. Speegle said investigators are still determining what caused the whales to die.