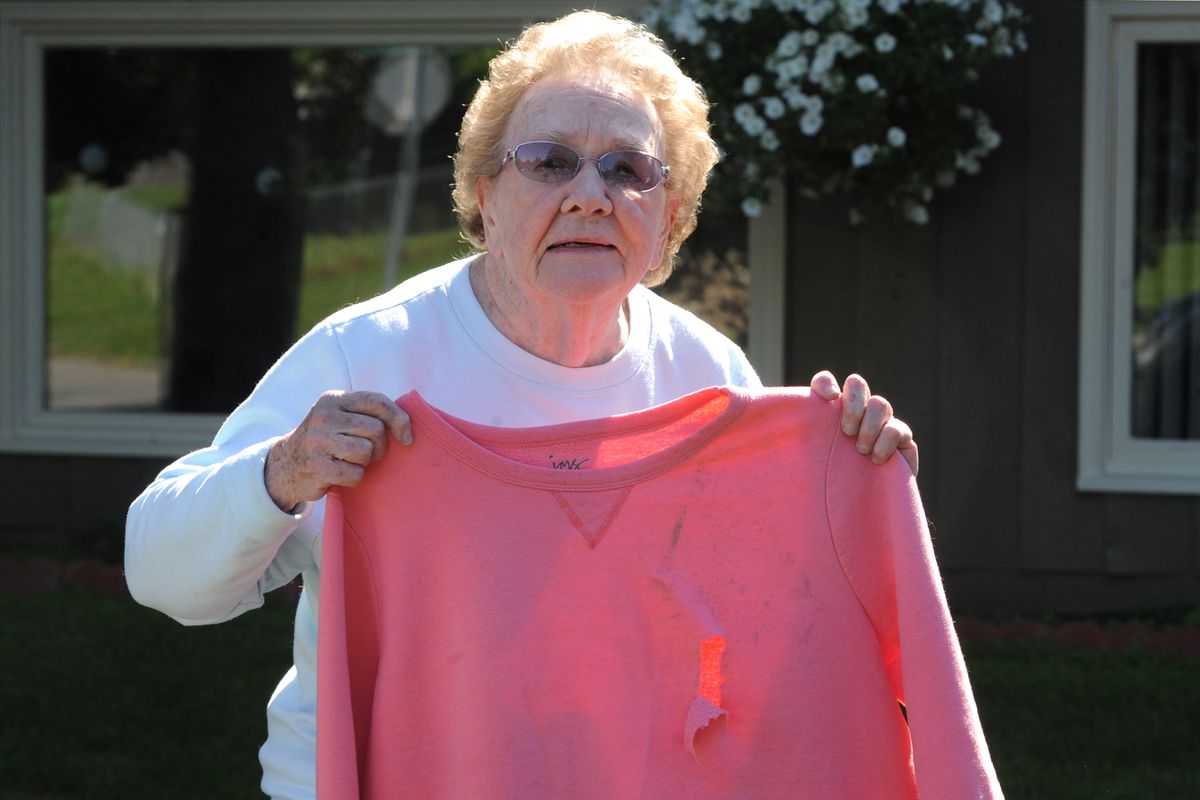 Donna Rodgers holds the sweatshirt she says she was wearing when a cow moose kicked her. "She really wanted to get me," Rodgers said at her Anchorage home on Thursday. Rodgers was walking with her three dogs at the former Eagleglen Golf Course on Joint Base Elmendorf-Richardson on Tuesday when a cow moose protecting calves charged her multiple times and struck her in the chest, she said. (Bill Roth / ADN)

Donna Rodgers holds the sweatshirt she says she was wearing when a cow moose kicked her. "She really wanted to get me," Rodgers said at her Anchorage home on Thursday. Rodgers was walking with her three dogs at the former Eagleglen Golf Course on Joint Base Elmendorf-Richardson on Tuesday when a cow moose protecting calves charged her multiple times and struck her in the chest, she said. (Bill Roth / ADN)

Donna Rodgers has been walking the trails in Anchorage for more than 40 years and says she’s pretty much seen it all — coyotes, more moose than she can count, and a face-to-face encounter with a black bear.

There have been a few animal encounters that made Rodgers’ stomach flip, but nothing could compare to what the 82-year-old felt Tuesday on Joint Base Elmendorf-Richardson, when she dodged a “huge, angry mama moose” with two calves for nearly a half-hour, she said.

Despite getting kicked, Rodgers said in an interview Thursday, she escaped with only a torn shirt and a few bruises.

“Thank the good Lord that he got me through this,” she said.

Rodgers is spry for 82 — most of the time she doesn’t even feel her age, she said.

Rodgers likes to stay active and goes for walks nearly every day. On Tuesday, she said, she set out on one of her favorite paths, a maintenance trail at JBER.

With her were her three dogs: Briana, an Australian shepherd; Ranger, a black-and-white Italian greyhound; and a dachshund-Chihuahua mix named Belle that Rodgers pushes in a stroller because Belle has problems walking.

“Ranger — he’s a pistol,” she said. “All of these dogs have their own personalities, but they’re really good dogs.”

She always brings the dogs with her because they make her feel safe on the trails. Rodgers tries to be alert and aware of her surroundings and said she plays music or listens to the radio when she walks to make extra noise.

She said she wasn’t far into the trail Tuesday when her oldest son, Brad, called her phone.

“As we’re talking, I hear the dogs barking and the next thing I know, here comes this huge, angry mama moose coming flying out of the side of the road,” she said.

Several people have been injured by moose this year, said Dave Battle, a spokesman for the Alaska Department of Fish and Game. This is the time of year when moose are more likely to attack, especially if they have calves, he said.

“If you see a cow with calves, she’s much more amped up than normal,” he said. “The calves aren’t big enough to escape from predators, so their strategy is to stand their ground and charge at whatever they feel might be a threat in order to protect the calves.”

It’s especially important, Battle said, to be alert and look into the vegetation to avoid surprising a moose or stumbling upon calves. Fish and Game encourages people with dogs in particular to give moose “an extremely wide berth,” as moose view dogs as a natural enemy and sometimes make an extra effort to kick them.

“That gave me an opportunity,” Rodgers said. “At first I thought I could get back to the truck, which was in the parking lot, but I couldn’t.”

As Rodgers bolted down the trail, she said, she realized the moose was heading in her direction. She scooped her smallest dog out of the stroller and dragged the carrier toward a big, wooden sign near the side of the Glenn Highway. She knew she needed to get behind something — fast.

In the meantime, Rodgers said, she had barricaded the stroller next to nearby bushes in an attempt to block the moose from one side as she danced around the sign, trying to evade the moose’s charges.

For the next 20 to 25 minutes, Rodgers said, the moose kept charging her. Sometimes it would disappear momentarily into the woods, only to charge from a different direction, she said.

“She was pretty determined,” Rodgers said.

Just before base security arrived, the moose kicked out and hit Rodgers in the chest, she said.

The moose had disappeared into the woods when security officers pulled up, Rodgers said. As she was talking with officers, the moose barreled toward them, according to Rodgers. The officers pulled Rodgers into their truck and the moose continued to charge at the vehicle, she said.

Questions about the incident sent in an email to the base were not immediately answered Thursday evening.

Rodgers said she was brought to the hospital for X-rays since the moose kicked her, but she was fine aside from a bruised chest and a bruised finger.

As for the dogs, a couple had scared the moose away from Briana and brought her into their car, according to Rodgers. Officers tracked Ranger down in a nearby neighborhood, she said.

When they all got home that night, Rodgers gave the dogs a treat.

“If those two dogs weren’t there, she would’ve got me,” Rodgers said.

Rodgers said the experience was terrifying and something she never hopes to go through again, but she feels lucky to be alive.

She plans to go back out on the trail again, and she isn’t angry at the moose.

“This is probably why I stay in Alaska,” she said. “There’s no snakes, but there’s lots of animals and I think they’re beautiful. But you have to have a healthy respect for them, and I definitely do.

"You have to respect them because they’re mamas just like our mamas — they’re just trying to protect their little ones.”