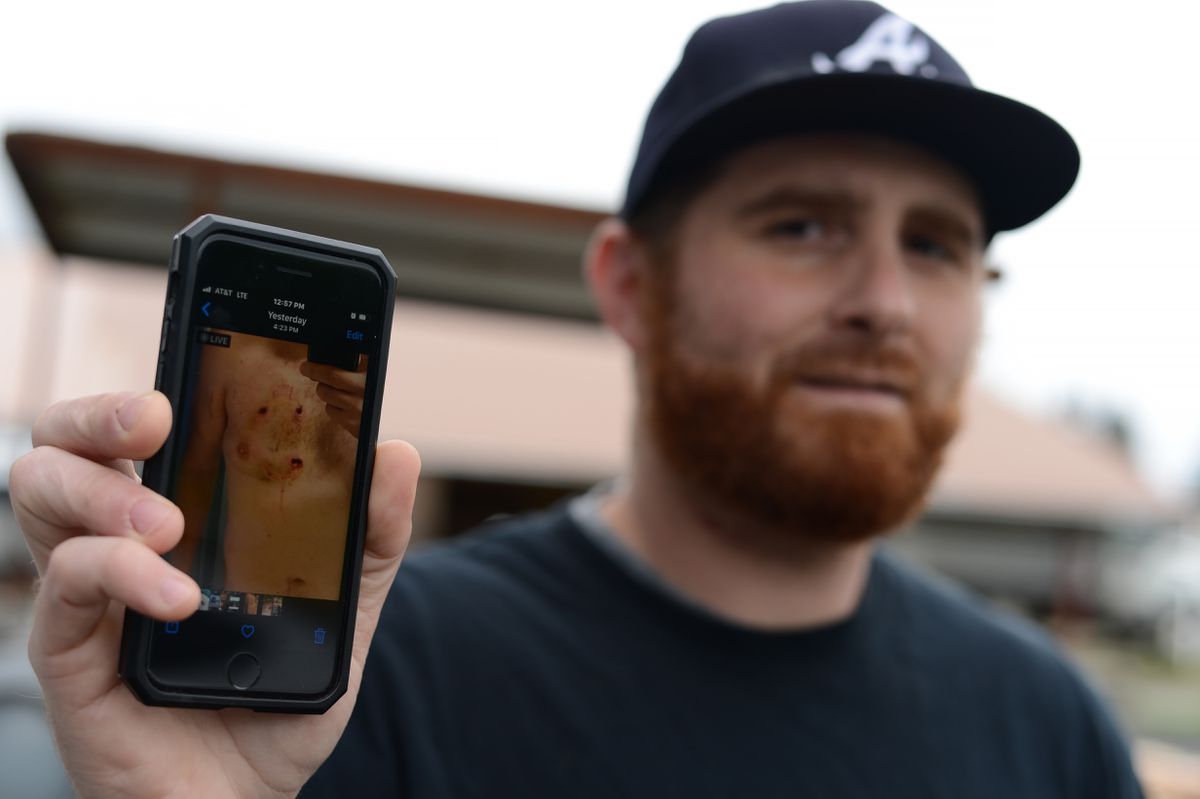 JUNEAU — A man is healing after a black bear entered a home’s open door late Friday night and threw him to the ground in a panicked escape attempt. A Fish and Game wildlife biologist in the area called it an unusual event but said bear encounters have more frequent than normal this year in the capital city, possibly because natural foods are limited.

Brandon McVey was at a friend’s house in Switzer Village Mobile Home Park when the bear followed them inside about 11 p.m., he said.

“Norm, he’s got like 10 kids, and they’re all in the living room,” McVey said, describing the scene. “(The bear) had walked past us, and he was walking toward the kids.”

One of the children, a two-year-old, reached out to touch the bear, before his mother, Angela Lott, realized what was happening, grabbed the baby and ran to a bedroom. The other kids scrambled under a table and a nearby couch.

McVey and his friend, Norm Lott, began yelling at the bear, which reared up and lunged.

“He just jumped up and basically hit me, and then I kind of threw an elbow the same time he was hitting me, and he sat me right down,” McVey said, describing the way the bear threw him to the floor.

Lott was also thrown to the floor, and the bear fled through the home’s door into its arctic entry, where it was trapped by a closed door. The bear tore up a wall before ripping a window from its frame and escaping through the opening.

“It felt like a million years, seriously,” Angela Lott said of the time she spent trapped in her bedroom.

Bears infrequently break into homes in Switzer Village, he said, but all of the cases he’s aware of have involved empty houses.

Churchwell said the bear in this case was an adult male and remains at large. A younger bear, culprit of several recent garbage raids, was captured in a nearby trap on Saturday and euthanized, he said.

Churchwell said there seems to be an unusual number of black bears in Juneau this year.

“It seems like there is not much natural foods around right now — very few fish in the rivers and berry production is very low,” he said, which contributes to bears’ interest in human food.

“Definitely keep your doors closed this time of year,” McVey said. “They’re getting wild out there.”

A lack of summer tourism means fewer people in Juneau, which could reduce the disincentive for skittish bears to come into town.

“It’s a definite possibility and something we’re curious about,” Churchwell said. “There are a lot of bears within Juneau this year.”