Spot a moose? Call it in: Help sought for annual survey of Anchorage’s urban moose 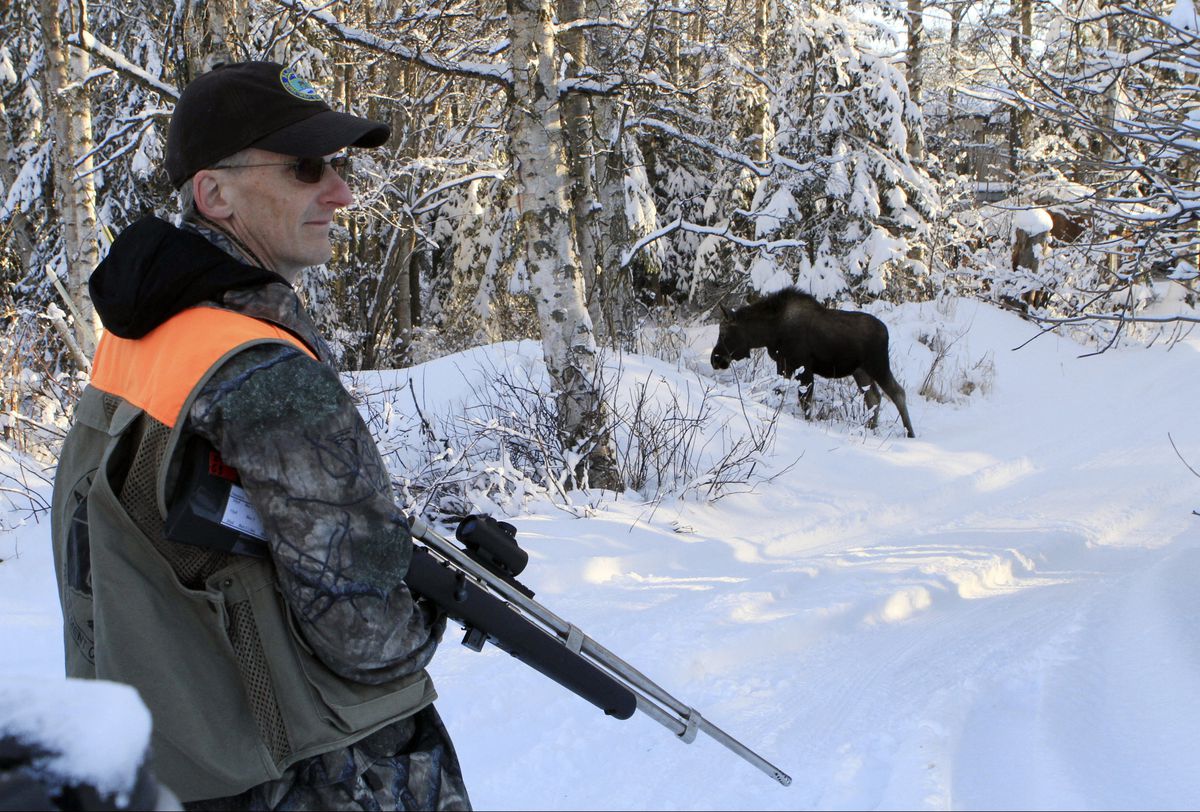 In this Feb. 23, 2018, file photo, Dave Battle of the Alaska Department Fish and Game waits for a moose to move off after he fired a dart into its side that collects a skin sample in Anchorage. (AP Photo/Dan Joling, File)

In this Feb. 23, 2018, file photo, Dave Battle of the Alaska Department Fish and Game waits for a moose to move off after he fired a dart into its side that collects a skin sample in Anchorage. (AP Photo/Dan Joling, File)

Anyone spotting one of the big ungulates lumbering around the city during daylight hours between Friday morning and Sunday evening is asked to call in sightings to the Alaska Department of Fish and Game. (Details of how to report sightings are at the end of this article.)

The multiday effort is aimed at getting an accurate population estimate for moose in and around the city, according to Dave Saalfeld, a research wildlife biologist with Fish and Game.

The survey was the solution to a problem: how to find and count moose in dense urban neighborhoods where conducting surveys from airplanes — flying in patterns to methodically cover ground and get a complete count — can be difficult to impossible, especially in a city with multiple airports and associated air restrictions.

“We never had a good technique for getting a population estimate for moose in Anchorage,” Saalfeld said.

So, biologists came up with a better option. And they decided to ask the public for help.

“We could drive around all we wanted, but we would never find that moose in the back of somebody’s house without without the public calling in,” Saalfeld said.

When someone calls in a moose sighting this weekend, it will trigger a series of events. Biologists receive the alert — they average around 1,000 moose tips each weekend. Then, one of seven two-person teams will head to the location of the report.

From there, they fire what’s known as a “biopsy gun,” which lightly strikes the moose with a dart, Saalfeld said.

The dart is designed to pop out quickly, only retaining a bit of tissue that scientists can use to determine that moose’s unique DNA and record it as part of the Anchorage moose population.

“Most of the moose don’t even feel it, or if they feel it, it’s very light,” Saalfeld said. “And they actually typically lay down or sit on top of it, and we have to wait sometimes a pretty good amount of time before we can actually go in and recover that dart because the moose is standing right on top of it for so long.”

Anchorage residents are invited to report moose sightings within the Anchorage Bowl during daylight hours between 8 a.m. Friday and 5 p.m. Sunday.

Sightings may be reported:

Reports should include the number of moose observed, the time of the sighting and the moose location.

Fish and Game is reminding people to not approach the moose themselves or survey teams, who will be wearing orange vests or yellow jackets and carrying dart projectors that look like hunting rifles.