A lynx, a toddler and a bizarre encounter in an Anchorage Hillside driveway 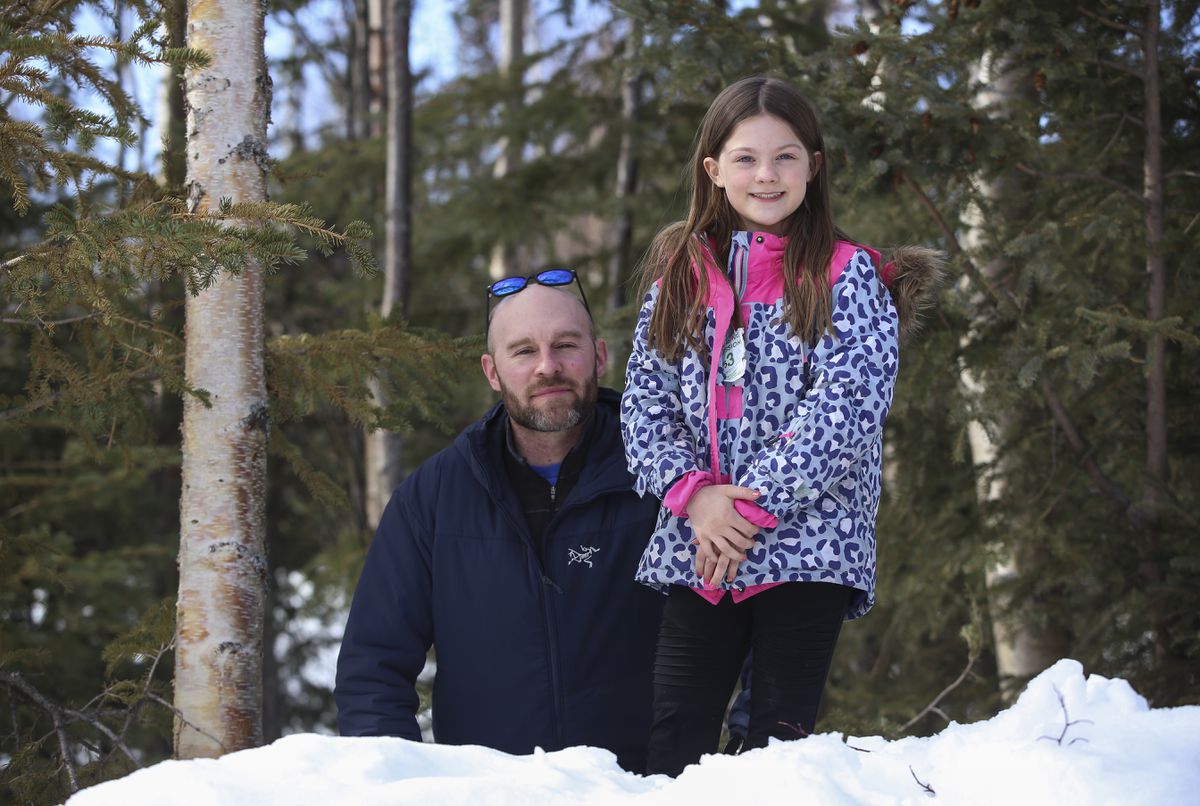 Michael Cipriano stands with his daughter, Abigail, 9, on a mound of snow near where she and her sister were playing when they encountered a lynx in the front yard of their Anchorage home. Photographed on Friday, April 2, 2021. (Emily Mesner / ADN)

Michael Cipriano stands with his daughter, Abigail, 9, on a mound of snow near where she and her sister were playing when they encountered a lynx in the front yard of their Anchorage home. Photographed on Friday, April 2, 2021. (Emily Mesner / ADN)

A lynx bounded down Michael Cipriano’s driveway on Anchorage’s Lower Hillside in pursuit of a snowshoe hare Tuesday.

At first, Cipriano, 39, who was outside shoveling snow, told his two daughters playing nearby to watch the lynx. He thought it might have been about to kill the hare.

But then the lynx stopped in its tracks after hearing a noise from his toddler, Eila. Instead of continuing to chase the hare, the cat looked over and focused in on the 2-year-old.

The animal then took a step toward Cipriano’s toddler before it leapt over a snowbank and approached within a few feet of her.

“I don’t know what its intention was,” he said. “But I wasn’t gonna wait to find out.”

He told his 9-year-old, Abby, to pick up Eila while Cipriano jumped over the snowbank himself and the lynx got increasingly close to his daughters — within 4 or 5 feet of the girls.

Cipriano smacked his snow shovel to the ground in front of the lynx. The cat stopped and started to back away, through it never really looked over at Cipriano and didn’t seem afraid of him. It didn’t blink or skitter away quickly, he said.

Cipriano contacted the Alaska Department of Fish and Game about the encounter.

Dave Battle, a wildlife biologist with Fish and Game in Anchorage, said the lynx was potentially a young cat, born last year and just making its way in the world after leaving its mom. Juvenile lynx can be naive and don’t really know what they’re seeing all the time, he said. And beyond that, lynx are just curious animals, juvenile or otherwise. Also, Anchorage lynx are fairly used to humans and aren’t necessarily fearful of them.

Battle cautioned that the incident doesn’t mean there are aggressive lynx scurrying about Anchorage. Certainly, if any wild animal approaches a child or dog, it’s important to be cautious, he said. Anchorage dog owners on the Hillside have previously reported other encounters with lynx. But Battle said there haven’t been any documented attacks of lynx on humans in North America.

The encounter was weird — awkward, Cipriano said. He didn’t think the lynx would attack his young daughter, but he didn’t know exactly what it was doing, either. The lynx was hyper-focused on the toddler and had entirely stopped chasing the hare, which surprised him since it was within a few feet of the small mammal, which is the lynx’s common prey.

Cipriano brought his two daughters inside. Abby, who grabbed the toddler and started moving in the opposite direction of the lynx, was shaking. Cipriano’s 2-year-old didn’t exactly know what was going on but knew everyone was yelling and got swiftly brought inside, so it took her a bit to calm down as well, he said.

Cipriano and his family moved into the neighborhood off Elmore Road just south of Huffman Road in October, and said they’ve definitely seen lynx around before. After his wife posted on Nextdoor about the encounter, several other people said they’d seen the cats in the area as well.

Cipriano and his daughters still go out in the front yard, but he said he’s on higher alert. He usually lets his kids roam around on their acre of land, but said he’s keeping them closer to him now. He just wants people to be aware of what happened.

“We live in a wild place,” Cipriano said. “And so you need to be aware of what’s going on around you.”