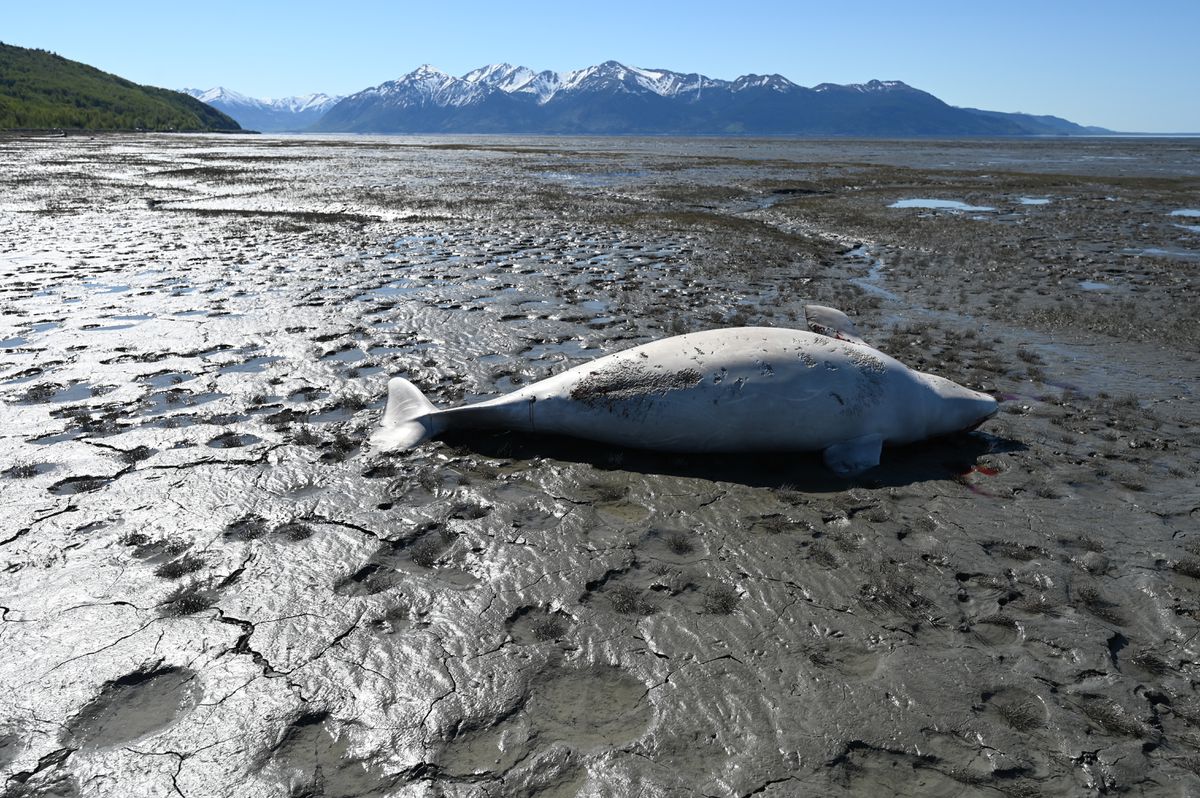 Whatever insights they gain could help answer questions about the belugas and why their population has yet to recover after a decline in recent decades.

“Even though it’s one individual, we can gain a lot of knowledge,” said Jill Seymour, NOAA Fisheries Cook Inlet beluga recovery coordinator.

Since the 1970s, the Cook Inlet beluga whale population has dropped dramatically, by about 80%. Cook Inlet belugas are geographically isolated from belugas in other parts of Alaska, which means if their population were to be wiped out, other belugas likely wouldn’t come in and repopulate the area, Seymour said.

Initially, when the Cook Inlet beluga population began to decline, scientists suspected it was due to unsustainable hunting practices. But even after beluga hunting ceased in the early 21st century, the whales didn’t recover, and recent estimates show that there are about 280 belugas, compared with a population of roughly 1,300 in the 1970s, Seymour said.

While there’s been lots of research into why the population has yet to rebound, scientists haven’t been able to find a definitive reason.

Plus, the white whales are so endangered that scientists try not to bother or interact with the living ones, which is why research on an animal that recently died can be so helpful.

“So, one of the best ways for us to try and get at some of the details of the health of individuals and the health of the population is these unfortunate incidences where you have a dead beluga that washes ashore,” she said.

That’s where veterinary pathologists — like Dr. Kathy Burek, who performed the necropsy on the beluga found south of Anchorage — come in. They take tissue samples from the whales, and those specimens accumulated over time can help build up more information about the population overall.

“There’s just so much data that we get out of these guys,” Burek said.

Scientists were able to examine the animal Tuesday after a trucker reported the stranding that morning. They determined that its death occurred after a ruptured intestine, Burek said.

Because the animal was so fresh and only slightly decomposing, it served as a valuable source of samples for researchers. There’s much more that scientists can look at when an animal hasn’t yet decomposed.

“The value of the carcass goes down drastically the more rotten it is,” Burek said.

The scientists completed the necropsy by taking samples from various organs and making sure the animal had not had any sort of human interaction via boat strike, gunshot or entanglement, which it had not.

They then took the samples back to the lab to look at all sorts of things — from what the animal ate, to contaminants and infectious diseases.

The beluga had a ruptured intestine probably related to parasites, which were found in the whale’s abdomen, lungs and kidneys, Burek said. The parasites likely led to an entanglement within a section of the intestines, leading it to rupture.

“Very unusual,” Burek said. “I’ve never seen anything like that before.”

A few belugas have been spotted with lots of parasites recently, which brings up more questions — whether it’s a new parasite, whether the whales are somehow immunosuppressed or if there are other factors involved, Burek said.

While almost all animals have some parasites living happily together, “the problem comes when you have a parasite that kind of overwhelms the animal,” Burek said.