Raise your glass to beer born and brewed in Alaska 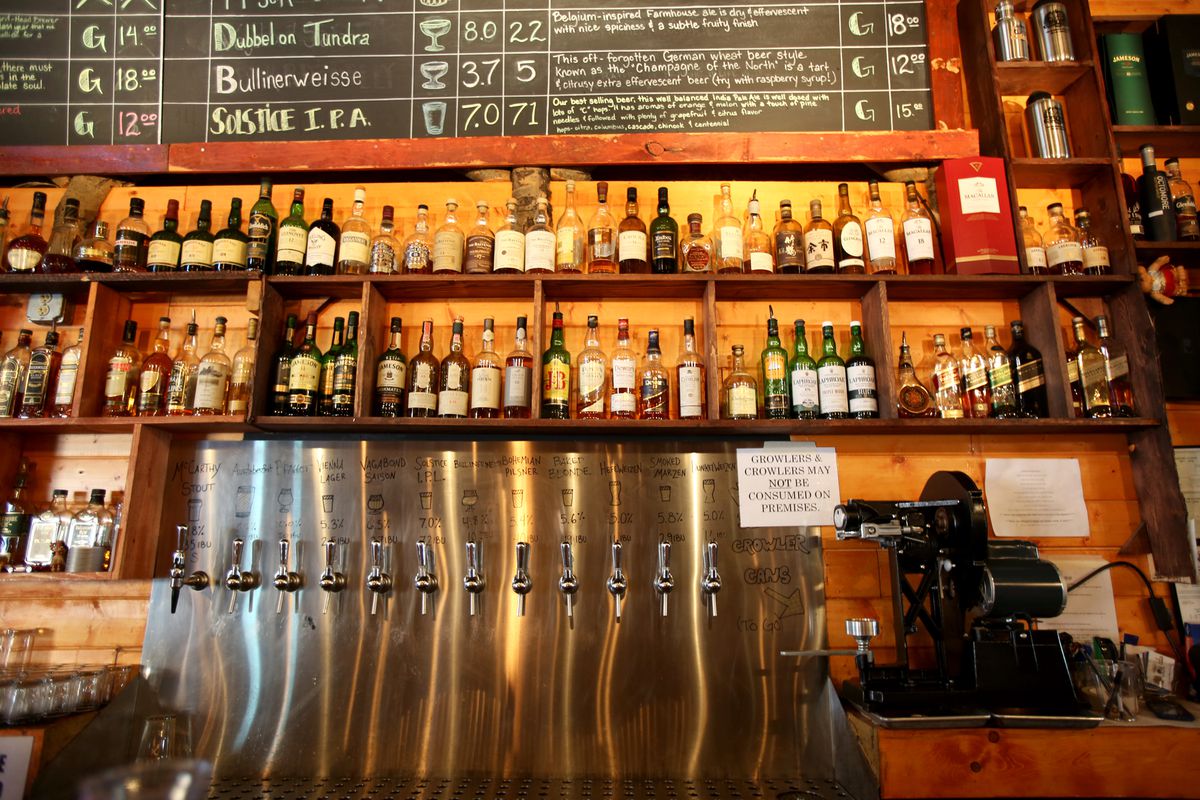 Beer taps and whiskey bottles line the back of the bar at 49th State Brewing Co. (Shelby Lum / ADN)

Beer taps and whiskey bottles line the back of the bar at 49th State Brewing Co. (Shelby Lum / ADN)

In exchange for living in what's perhaps the country's most beautiful state, Alaskans sometimes have to do without: professional sports teams, In-and-Out Burger and, well, sunlight for half the year. But we make up for it with the Iditarod, reindeer sausages and aurora borealis chasing. In other words, we often have to make our own fun. And, sometimes, by "fun" I mean "beer." Those words are interchangeable, right?

Beer is a big part of life for Alaskans. We hike with it, camp with it, boat with it, cook with it and pair it with foods like the stuffiest of sommeliers. We throw it monthly birthday parties like the First Tap events at Broken Tooth Brewing Co. (otherwise known as the Bear Tooth Theatrepub and Moose's Tooth Pub and Pizzeria), complete with national musical acts like Michael Franti and Imagine Dragons. We even do yoga with it (on weekends at downtown's sprawling Williwaw venue). In other words, we take it everywhere and we take it seriously.

Beers from the state's biggest brewery – Alaskan Brewing Co., based in Juneau – might already be in your refrigerator if you live in one of the 20 Western and Midwestern states where it's available. Or you might have refreshed yourself with an Alaskan Amber on your Alaska Airlines flight on the way into Anchorage. By sales volume it is the 19th largest craft brewery in the United States. With a steady line of signature brews – and some seasonal specialties that incorporate cranberries, raspberries, locally roasted coffee and even Alaskan spruce tips – it's the most well-established of all the Alaskan breweries. Ubiquitous around the state, this long-running brewery is our Papa Beer, if you will (I'll show myself out).

But Alaskan Brewing Co. is just one of over 30 breweries around the state (for a comprehensive list, visit brewersguildofalaska.net). And while 15 of them are in Anchorage or within a short drive of our state's largest city (including the relatively populous communities of Girdwood, Eagle River, Palmer and Wasilla), some of our tiniest towns and most remote ports of call are emphatically in on the brewing action.

The ever-expanding Denali Brewing Co. in Talkeetna (population 876) may be a small-town hero, but it's anything but small. In fact, it's currently the second largest beer producer in Alaska. Their four signature beers – Mother Ale, Chuli Stout, Single Engine Red and the ever-popular Twister Creek IPA – are year-round mainstays of summer barbecues and winter bonfires around the state.

But some breweries are even more remote. Island hopping here can be one way to get your fill of hops. Breweries can be found in Sitka (Baranof Island Brewing Co.), Kodiak (Kodiak Island Brewing Co.), and even Chichagov Island (Icy Strait Brewing Co.), in the tiny town of Hoonah (population 745). In other words, no matter where your Alaska travels take you, you'll never be far from a frosty, frothy, locally brewed pint glass of fun.

Of course, most trips to Alaska begin and end in Anchorage. And if, during your travels, you've foolishly left some beers untasted, you can make up for lost time in our state's biggest city.

Glacier Brewhouse specializes in "English and American West Coast style beers along with a elaborate oak aging program." Opt for Raspberry Wheat, Oatmeal Stout, Imperial Blonde, Bavarian Hefeweizen or a flight that includes them all. Or try their special, cask-conditioned ale, which undergoes a secondary fermentation, resulting in a creamier end product.

Around the corner is 49th State Brewing Co., expanding into Anchorage from its original location in Healy, at the edge of Denali National Park. If you were unable to visit their flagship location, where you can sip beer while playing bocce or horseshoes on the lawn, you can catch up with them here. There are unique beer offerings like White Peach White (described as a "beer Bellini") or the Dunkelweizen, a dark, unfiltered, wheat beer which is, let's face it, super fun to say. This location also boasts some of the best views in town and an expansive outdoor rooftop patio.

Just about all of the full-service restaurants in downtown Anchorage proudly feature some variety of Alaskan beers. The PubHouse at the Inlet Tower has some interesting offerings, including Denali Brewing Company's "Purple Haze," which is made with wild Alaskan blueberries, if you like a little fruit with your froth. In the heart of downtown, Humpy's Great Alaskan Alehouse prides itself on a huge selection of beers, both international and local. New beer is rotated in daily, including offerings from their own label, such as Humpy's Brewing Company Nitro Coffee Stout, made with locally roasted SteamDot Coffee (brewed by Denali Brewing).

If you have transportation around the city, treat yourself to a brewery tasting-room tour. Found in unassuming little side streets in the more industrial areas of Anchorage, some of our best beers can be sipped and savored at the source. Finding these funky little spots can feel like being invited to a secret party. And it's a glimpse into Anchorage's most authentic beer culture.

You might start by trying the most popular beer at Resolution Brewing Co.: Neighborhood IPA. Jokingly referred to as "the most diverse beer in Anchorage," it celebrates its home neighborhood of Mountain View, which in recent years has received widespread media attention as the most diverse census tract in the United States.

Further south, King Street Brewing Co., Anchorage Brewing Co., Cynosure Brewing and Double Shovel Cider Co. (for a little variety) are all within a stone's throw of each other. If you're lucky, you might run into one of Anchorage's popular food trucks parked outside, so you'll have something to wash down with your flights.

Nearby, Midnight Sun Brewing Co. is part tasting room and part community center, with First Friday art openings, a rotating menu of creative comfort food and an all-around cool, local vibe. My next-door neighbors frequent the brewery for their great brews (favorites include the Panty Peeler Belgian-style Trippel and the Pleasure Town IPA) and also to pick up free spent-grain to feed to their chickens.

Bear in mind that tasting rooms often have limited and varying hours, so be sure to check ahead.

Whether your travels take you to fine-dining restaurants, low-key alehouses or even rustic cabins in the woods, make like an Alaskan and fuel your adventures with one of our beloved, home-grown brews. When in Alaska, drink as the Alaskans do.