Moose and whales and eagles, oh my! Where to view some Alaska wildlife — safely 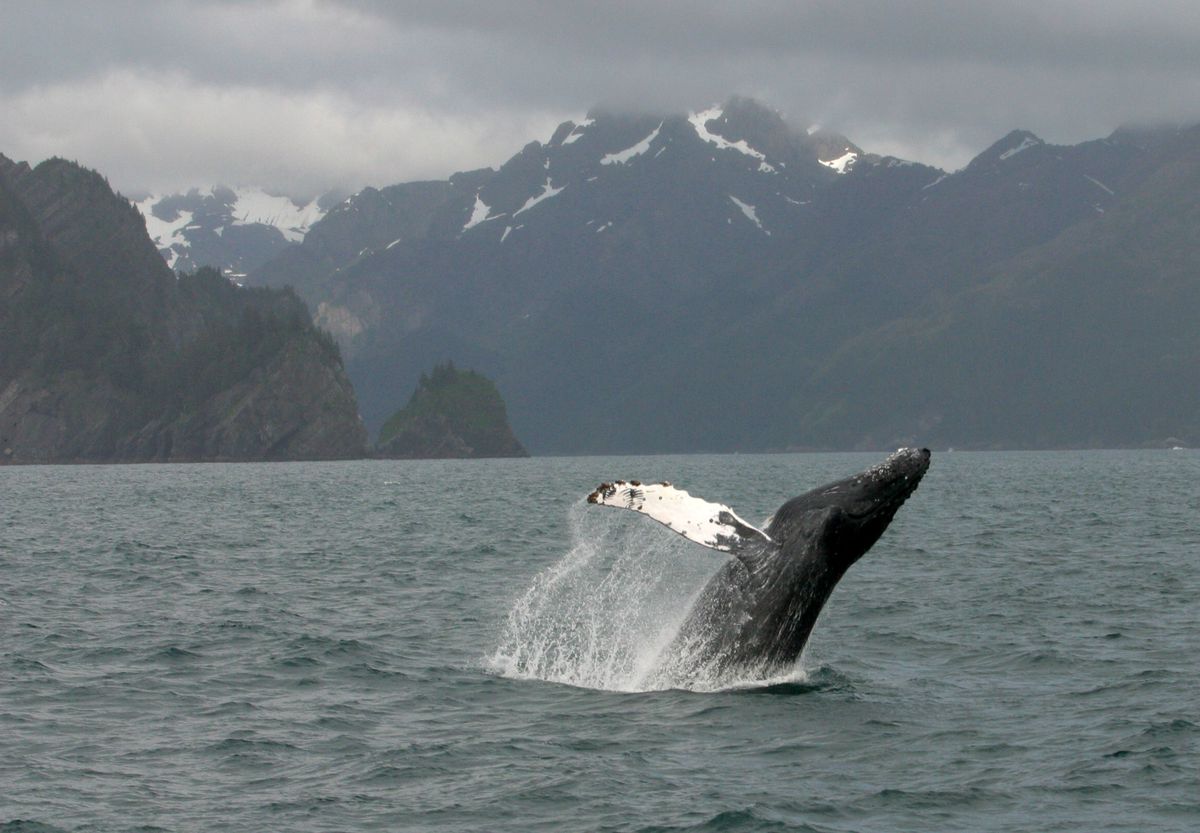 Tourists are reporting high number of whale sightings on whale watching tours leaving Seward this summer. On Saturday, June 11, 2016, south of Fox island in Resurrection Bay, this whale breached more than 15 times in the presence of whale-watching tour boats. Other whale sightings on the 4 1/2 hour tour offered by one company -- including of a whale lunge feeding -- wowed tourists. (Alex DeMarban / Alaska Dispatch News)

Tourists are reporting high number of whale sightings on whale watching tours leaving Seward this summer. On Saturday, June 11, 2016, south of Fox island in Resurrection Bay, this whale breached more than 15 times in the presence of whale-watching tour boats. Other whale sightings on the 4 1/2 hour tour offered by one company -- including of a whale lunge feeding -- wowed tourists. (Alex DeMarban / Alaska Dispatch News)

The 49th state is home to an astounding variety of wildlife: Some species are present at the highest density anywhere in the world. These animals have the power to captivate locals and visitors alike; you’ll often see cars pulling over to get closer looks. Here are just a few for your bucket list and tips on where to scope them out.

Moose: Locals will joke that moose are to Alaska what squirrels are to the Lower 48. While they’re not quite that ubiquitous, they do often show up where you’d least expect them — perusing a backyard garden, browsing shrubs in a grocery store parking lot or enjoying the long grass on the side of the highway. They’re hard to miss: Adult females weigh between 800 to 1,300 pounds and males tip the scales at 1,200 to 1,600 pounds.

Bear: Of the three species of bear found in Alaska, the two you’re most likely to see are brown bears and black bears. Black bears, the smallest of the bunch, usually dwell in forested areas, but are also more likely to wander into town or pick through garbage cans. Brown bears, also called grizzlies, are spread throughout most of the state. A subspecies of brown bear, the Kodiak bear, is found exclusively in the Kodiak Archipelago. Then there’s the Arctic-dwelling polar bear, which is primarily found in coastal areas above the Arctic Circle and on the North Slope.

Dall sheep: Snow white with small, curved, golden-brown horns, this nimble subspecies of sheep thrives in mountainous terrain, where predators can’t reach and humans don’t bother them. You might see them high up on the near-vertical rock face of the Seward Highway — where they can sometimes distract drivers and present a traffic hazard. They’re also found throughout Chugach State Park and scattered around Denali National Park and Preserve.

Salmon: Five kinds of salmon can be found in the rivers and streams of Alaska: sockeye (also called red), pink (aka humpy), king (or chinook), coho (silver) and chum (dog). During the summer months, salmon return from the sea to the waters where they were hatched. Their internal homing devices bring them remarkably close to where they entered the world, and that’s where they mate, spawn and die. You can watch their epic homecoming journeys throughout the state, though one of the easiest viewing areas, Ship Creek, runs through the heart of downtown Anchorage. There you can watch kings, coho and pink salmon charging upstream and eager anglers standing shoulder-to-shoulder, trying to fill their freezers. Kings start running in late May through July and cohos claim the river from August through mid-September.

Bald eagles: Bald eagles, Alaska’s largest resident bird of prey with a wing span of up to 7.5 feet, are a frequent sight in the Last Frontier. Some towns, like Unalaska/Dutch Harbor, are practically overrun with this national emblem. It’s estimated that a whopping 30,000 bald eagles are in Alaska.

Whales: Take a boat in Prince William Sound or Resurrection Bay and, if the timing is right, you’ll see the tails of humpback, bowhead and gray whales waving in the distance. A few of the other kinds of whales in Alaska: beluga populations found in Cook Inlet and Turnagain Arm; bowheads, which come close to North Slope villages during their migration; and orcas, found in Glacier Bay area and the Aleutian Islands.

Where to see Alaska animals up close

Each of the animals at the Conservation Center has a story. Uli, the female black bear, was found wandering downtown Juneau as a 5-pound cub; Jade, the red fox, was found by joggers after being orphaned; Artemis, a musk ox calf, was found hiding under a raised utility building near Prudhoe Bay after she was separated from her herd. They’ve all found a lifelong home at the sanctuary, which is dedicated to animal care, conservation, research and education. The center has over 200 acres of habitat for the animals — including moose, wood bison, deer, elk, birds of prey, coyotes and reindeer. Some, like the wood bison, are raised and reintroduced to the wild. (Mile 79 of the Seward Highway, Portage)

Started in 1969 with just Annabelle, an elephant won by a local grocer in a contest, the zoo now includes more than 100 animals, including polar bears, Dall sheep, harbor seals and Arctic fox. Beyond simply providing a way to view the animals, the zoo focuses on education, research and animal rehabilitation. (4731 O’Malley Road, Anchorage)

The only coldwater marine-science facility in the Western Hemisphere, the SeaLife Center in Seward is where to go if you want to see Steller sea lions, seals, puffins and other coastal birds, salmon, octopus, crabs, starfish and sea urchins. A big part of the SeaLife Center’s mission is rehabilitating injured or abandoned animals from throughout the state, so you might even see an infant walrus, beluga whale or other sea mammal. (301 Railway Ave., Seward)

Located on a Colony farm in Palmer, this domesticated musk ox operation began in 1964. Part of the farm’s animal husbandry involves collecting the hair that’s shed from musk ox undercoats each spring. The fibers, called qiviut, are said to be softer than cashmere and warmer than wool when spun into yarn, which you can purchase in the farm’s gift shop. You can only get as close as the fences allow, but you’ll have no problem seeing the handful of new calves born each spring. (12850 E. Archie Road, Palmer)

You can pet and feed the roughly 150 reindeer at this farm in Palmer — they’re friendly and will eat grain pellets out of your hand. Fun fact: These same reindeer participate in the annual Running of the Reindeer at the Anchorage Rondy festival each February (think running of the bulls, but with reindeer in downtown Anchorage). (5561 S. Bodenburg Loop Road, Palmer)

Bordering the University of Alaska Fairbanks, this research station is mostly devoted to studying musk oxen, which gives students at the university experience maintaining colonies of large animals. You don’t have to be a student to meet their musk oxen (and the reindeer and cattle that also live there) — LARS has regularly scheduled open hours in the summer and pre-arranged tours in the winter for visitors to stop by. (2220 Yankovich Road, Fairbanks)