No increase in methane emissions on North Slope, despite warming temperatures 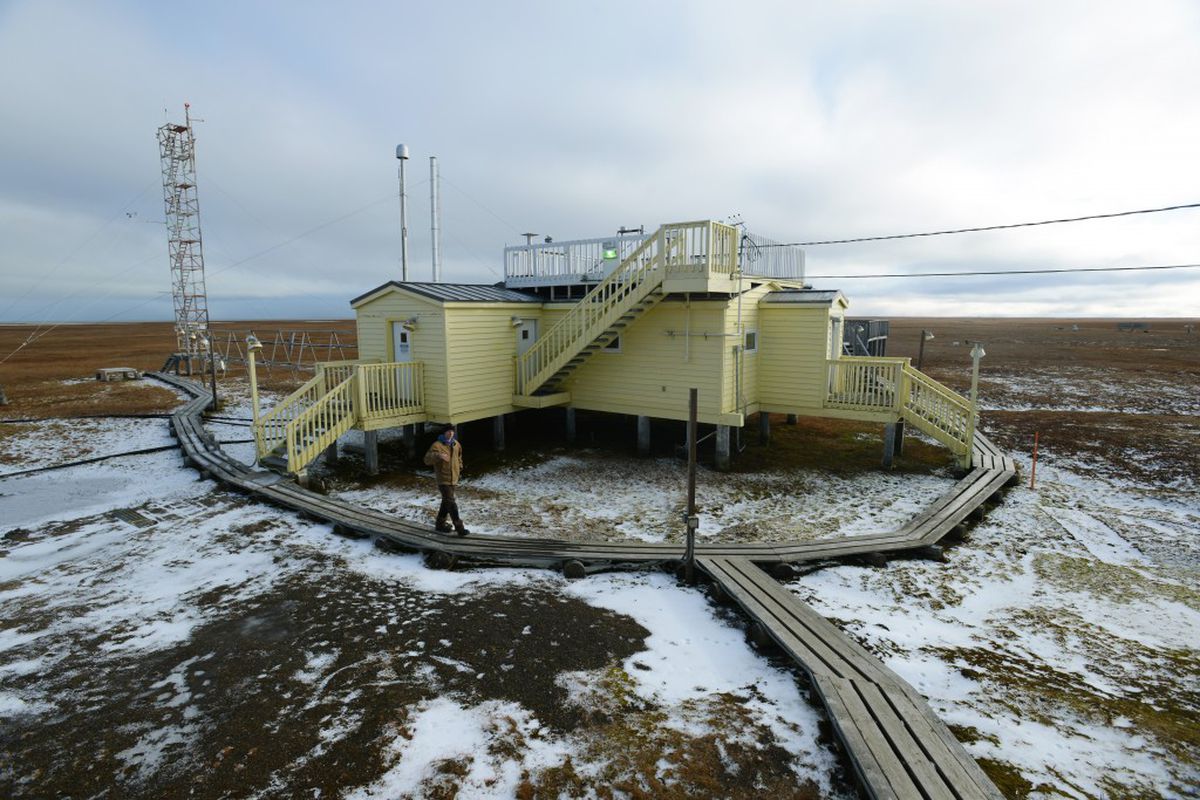 The results, detailed in a new study published in the American Geophysical Union's Geophysical Research Letters, provide some assurances that thawing permafrost in rapidly warming Alaska Arctic is not venting the powerful greenhouse gas that feeds into the warming cycle.

Atmospheric methane levels on the North Slope held steady over the three decades even as the region has warmed about 2.16 degrees each decade, said the study, by researchers at the University of Colorado's Cooperative Institute for Research in Environmental Sciences, the National Oceanic and Atmospheric Administration, NASA and other institutions.

"If we were starting to have large impacts, we would be starting to detect that. And we really don't see that," said lead author Colm Sweeney, a CIRES scientist working at NOAA's Earth System Research Laboratory in Boulder, Colorado.

The only noticeable upward trend has been a slight increase in methane levels in November and December in the years since 2010, a period when air temperatures have increased, according to the study.

The new methane study comes a few weeks after the release of a U.S. Geological Survey study downgraded the risks of carbon emissions from thawing Alaska permafrost and increased wildfires. According to that USGS research paper, which inventoried Alaska's carbon stores, expansion of vegetation, with its ability to lock up carbon, is expected to offset new atmospheric carbon releases through the end of the 21st century.

Methane is of special concern in global warming because it is an especially potent greenhouse gas. It has more than 25 times the heat-trapping power of carbon dioxide.

The methane levels used in the study were measured from 1986 to 2015 at NOAA's Barrow Atmospheric Baseline Observatory, part of the agency's Global Greenhouse Gas Reference Network

The year-round atmospheric monitoring at the site has detected seasonal methane increases from July to December as wind blows from the south over the landscape and toward the ocean, the study said. But there is no long-term trend, the study said.

Yet to be evaluated is the long-term Slope emissions trend for carbon dioxide, the most abundant greenhouse gas. That is next for the research group, Sweeney said.

Arctic permafrost is approaching thaw temperatures on the Slope and elsewhere, and in some places has passed that threshold. Thaw in Arctic lake-beds has created some much-documented bubbles of methane, and there are estimates of large amounts expected to vent from marine waters in eastern Siberia.

Even those methane releases, however, have yet to contribute to a noticeable increase in atmospheric methane, at least on the Slope, Sweeney said.

There have been big concerns about thawing permafrost and the carbon it will release to the atmosphere. The carbon currently locked in the Arctic's permafrost — remnants of old plant and animal matter — is believed to total 2½ times the amount of carbon that has been emitted since the start of the Industrial Revolution in the 18th Century, according to NOAA. Since atmospheric carbon traps the Earth's heat, the gas released from thawed permafrost is expected to feed into a self-perpetuating warming cycle.

But carbon from permafrost is not necessarily destined to vent into the atmosphere, Sweeney said. There are instead four possible fates for it, he said.

Under some circumstances, generally in wet conditions where bacteria thrive, the bacterial consumption of thawed carbon will release methane, he said. In generally dry conditions, thawed permafrost will release carbon dioxide into the atmosphere, he said.

Carbon from thawed permafrost might also be swept into the river systems, as appears to be happening in Canada's Mackenzie River. And the thawed permafrost might release carbon that feeds new plant growth, Sweeney said. That last effect seems to be more prevalent in Alaska in the boreal areas south of the Brooks Range, where permafrost is patchy rather than continuous and where forest ecosystems are changing fast, he said.

About a fifth of the world's atmospheric methane comes from wetlands, Sweeney said. Warm regions, where there is much more bacterial activity, dominate  global wetlands' methane emissions, he said.

"The amount of methane coming out of the Arctic is actually relatively small compared to the tropics," he said.

Other sources of global methane emissions include agricultural operations, oil and gas operations, coal mining and landfills, according to the U.S. Environmental Protection Agency.