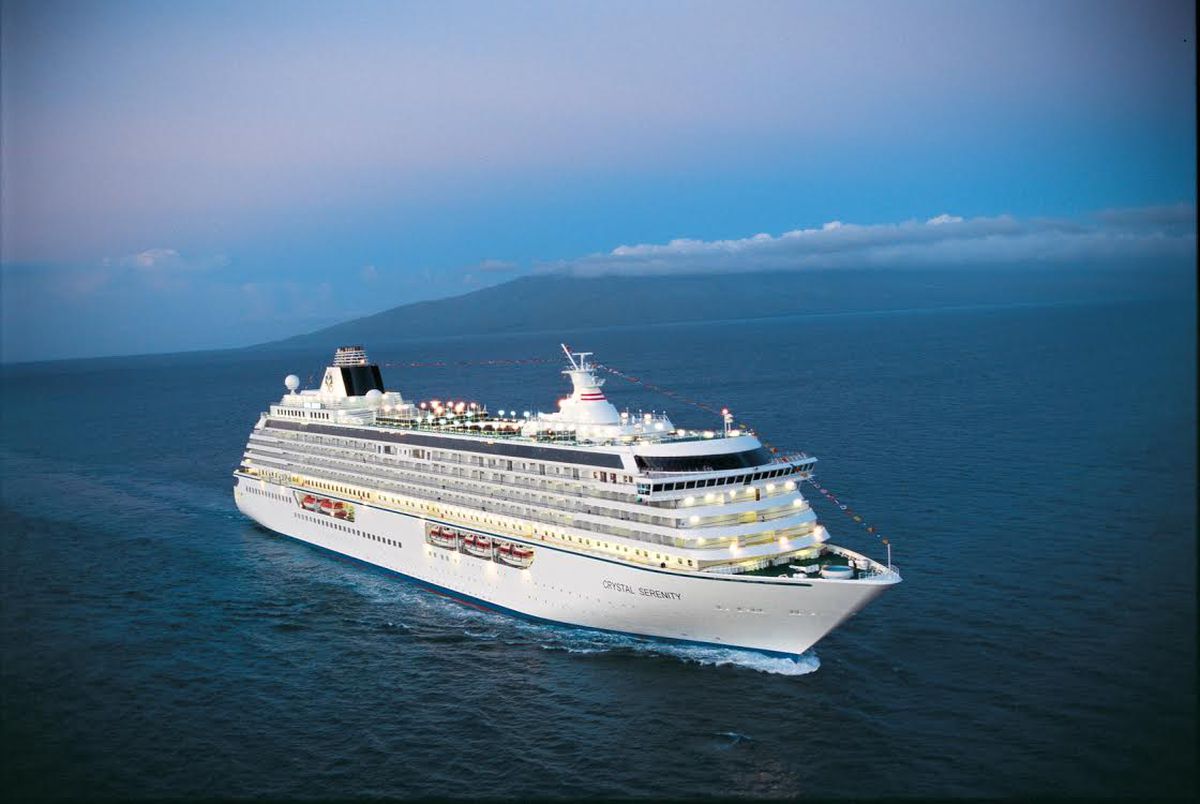 The 1,077 passenger capacity Crystal Serenity is planning a 32-day voyage through the Northwest Passage in the summer of 2016. (Courtesy Crystal Cruises)

The 1,077 passenger capacity Crystal Serenity is planning a 32-day voyage through the Northwest Passage in the summer of 2016. (Courtesy Crystal Cruises)

Sue and Jay Pendleton were booked on an Antarctic trip when something more enticing came along: a luxury cruise through the once impassable Northwest Passage.

They canceled their plans and paid $90,000 for the Crystal Serenity's voyage above the North American continent.

"This to us was kind of a bucket list thing," Sue Pendleton said. "I'd love to see a walrus before I die."

There are few opportunities for passengers to travel the sea route along the northern coast of North America. Even with global warming opening up the Northwest Passage, fewer than 50 passenger ships have completed the full transit, and those were largely yachts and expedition boats with at most a few hundred people.

With 1,070 passengers and a crew of 655, the Serenity is giant in comparison. Its foray into these waters will test not only the ability of man and machine to avoid ice but also the readiness of a multinational search and rescue coalition.

And with guests paying as much as $120,095 a person for a cabin, there are questions about the interactions between the passengers, who have been promised a "heady combination of indulgent services and enriching discovery" by the cruise line, and the local indigenous people who value their privacy.

The ship is "just so big and in your face, and everybody's perception of the Arctic is so fragile, remote and untouched," said Patrick T. Maher, co-editor of the book "Cruise Tourism in Polar Regions."

[This luxury cruise ship will soon sail through the Arctic. Here's what that means for Alaska.]

Last September, the second in command of the U.S. Coast Guard told reporters that planning for the cruise kept him up at night.

"I don't want a repeat of the Titanic," said Adm. Charles D. Michel, the vice commandant, at the Global Leadership in the Arctic conference in Anchorage. "This is a complex operation in a very environmentally sensitive and frankly navigationally difficult area, and the weather is incredibly treacherous there, logistics very difficult to deal with."

Sue Pendleton said that even though Crystal was taking the unusual step of requiring passengers to carry $50,000 in evacuation insurance, she wasn't concerned.

"There are plenty of lifeboats on board," she said.

In the 110 years since Roald Amundsen led the first trip through the Northwest Passage, fewer than 240 complete transits have been made, according to R.K. Headland of the Scott Polar Research Institute at the University of Cambridge in England. It wasn't until 1984 that a passenger ship, the Lindblad Explorer, made a full traverse.

The Serenity plans to leave Seward Aug. 16, sail along the Alaska coast, navigate the Canadian Arctic Archipelago, visit Greenland and then New England, before arriving in New York on Sept. 16.

Although the National Snow and Ice Data Center reported that Arctic temperatures in May were 4 to 5 degrees above the three-decade average, the Northwest Passage still isn't forecast to be completely free from summer sea ice that can be pushed around unpredictably by wind. Icebergs from melting glaciers are another concern, said Julienne Stroeve, a research scientist at the center, which is based in Boulder, Colorado.

Crystal said that it is taking extraordinary safety precautions.

Because the Serenity's 820-foot-long hull isn't strengthened for ice, forward looking sonar, ice scanning radar and thermal imaging equipment are being installed. Two ice pilots have been hired, though only one is required.

It will be escorted by the R.R.S. Ernest Shackleton, a 216-foot logistical ship carrying two six-seat helicopters for ice reconnaissance (and for sightseeing tours). It will also have oil pollution containment equipment, a salvage diver and survival rations.

In April, the Coast Guard hosted a meeting with its Canadian counterpart and other search and rescue partners to run through an imaginary scenario in which the Serenity had to be evacuated after being damaged by ice in an isolated area near the Alaska-Yukon border.

It's possible the exercise was chosen based on the grounding of the Clipper Adventurer in the Northwest Passage in 2010. It took 40 hours for a Canadian icebreaker to arrive to evacuate the 120 passengers from the 330-foot boat.

Those involved with the Serenity tabletop exercise called it a success.

"What was just amazing to see is that we were all on the same page," said Peter Garapick, the search and rescue superintendent for the Canadian Coast Guard's central and Arctic region.

Similarly, Michel of the U.S. Coast Guard said that he has been reassured as the Serenity's trip has come together.

Still, the safety of those on the ship is only part of the equation. The sensitivity of people on shore is another.

They were enthusiastic when approached about a possible visit, said Tim Soper, whose Expedition Voyage Consultants has been assisting Crystal.

Crystal was projecting that its cruise could bring $62,000 (80,000 Canadian dollars) to Cambridge Bay and $50,390 (CA$65,000) to Pond Inlet in salaries for cultural performers, guides and interpreters, as well as the purchase of Inuit art to be sold on the ship, according to Bernie MacIsaac, assistant deputy minister for economic development in Nunavut. More money could come through local purchases and donations, he said. That compares with about $2,325 (CA$3,000 ) to $3,875 (CA$5,000) for the expedition ships, he said.

Nonetheless, passengers have speculated on the cruise chat board about the potential for protests from various groups, Sue Pendleton said.

John Hocevar, the director of the oceans campaign for Greenpeace, said it was too early to say if the environmental group would be taking any action, but that it was unhappy with the arrival of cruise ships in the Northwest Passage.

"The whole ecosystem is changing incredibly quickly — polar bears, ice seals, walruses are literally fighting for survival. This is no time to be adding additional stresses to such a sensitive situation," said Hocevar, a marine biologist.

Environmental concerns were being managed through the regulatory process, MacIsaac said.

One of the shore excursions being offered to Serenity passengers is a "Study in Global Warming," a $600 package that includes a 250-mile round-trip flight to Shishmaref, an Alaska village of 580 that is being lost to rising sea levels.

Crystal Cruises receives a failing environmental grade from Friends of the Earth, and is banned until 2018 from the Port of Monterey in California for discharging treated wastewater within its National Marine Sanctuary in 2003.

In addition, the Serenity was fined for discharging ash off Croatia in 2009 when an engine suffered a mechanical failure, and in 2001, Crystal agreed to a settlement for excessive smokestack emissions off Juneau.

Yet, as with safety, Crystal is promising to surpass minimum requirements with this voyage. Low-sulfur fuel will be used, and garbage that isn't burned will be stored for removal. Treated sewage will be discharged at least 12 nautical miles from shore, said Paul Garcia, the Crystal spokesman.

Marcie Keever, the ocean and vessels program director for Friends of the Earth, said she was pleased with Crystal's decision to use a less-polluting fuel but said that the Serenity's sewage-treatment system is antiquated.

"We think they should install the technology to actually clean their sewage much, much better, and then discharge it at 12 nautical miles," she said.

Crystal is also trying to be sensitive to the local communities by limiting to approximately 250 the number of passengers on shore at any time, Soper said. That shouldn't be difficult because they will be tendered from the ship to the beach by small inflatable motorboats. Guests will be briefed on protocol, Soper said.

"They've already let us know you are not to use cellphones or landlines while you are on the shore," Sue Pendleton said.

Sam Arreak, the economic development officer for Pond Inlet, said that he has spoken to the elders and others about the arrival of the cruise ship.

"The majority agree that it's beneficial to the community overall," he said. "It provides economic benefit in employment and short-term work. It exposes our culture to more people. They get to hear our language and see our games."

He said some issues were raised, including people taking pictures without permission, misspelling names, and the disruption that ship passengers cause to the flow of daily life in the hamlet when they are visiting.

Local residents can be shy, he said, and want tourists to ask before taking a picture of them, their children, their pets or their property.

In 2014, the nearby hamlet of Clyde River, Nunavut (population 935), banned passenger ships for that summer, complaining that the passengers were too stingy. Statistics Canada doesn't list an average income for Clyde River, but the average income in Pond Inlet was CA$32,000  ($33,103) in 2011.

Success or not, two cruise lines are already selling tickets for Northwest Passage transits in 2017. The Serenity is planning a repeat voyage, and Regent Cruises is planning a sailing on the Seven Seas Navigator, a ship with an ice-strengthened hull that carries 835 passengers and crew members. Prices for that 30-day trip are $23,000 to $53,000 all-inclusive, according to Jason Lasecki, a spokesman for Regent Seven Seas Cruises.

The Arctic cruise expert Maher, an associate professor in the department of community studies at Cape Breton University in Nova Scotia, said the arrival of the Serenity opens the door on a "complicated" discussion about future cruise tourism in the Arctic.

"I don't think there will be 10 other cruise ship companies trying to do this in two years' time, or even five years' or 10 years' time," he said. "But it is opening up possibilities."

Meanwhile, Sue Pendleton said she's deciding which sparkly outfits to wear to the black-tie-optional dinners on the Serenity, and buying new binoculars in hopes of seeing a narwhal and a polar bear.

"We want to see the things before they're gone," she said.