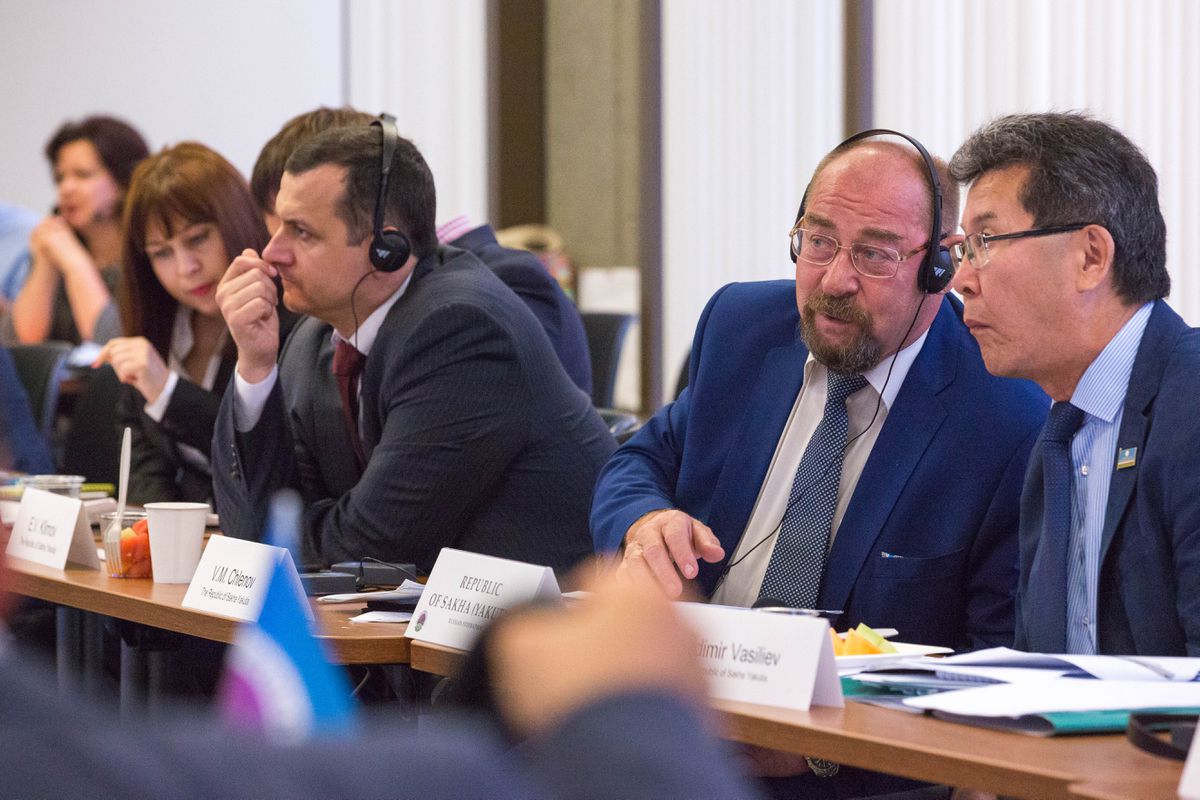 Vladimir Chlenov, left, and Vladimir Vasiliev, representing the Russian regions of Yamal-Nenets and Sakha (Yakutia), listen to a presentation in English at the Atwood building in Anchorage during the second day of the Northern Forum on Tuesday. (Loren Holmes / Alaska Dispatch News)

Vladimir Chlenov, left, and Vladimir Vasiliev, representing the Russian regions of Yamal-Nenets and Sakha (Yakutia), listen to a presentation in English at the Atwood building in Anchorage during the second day of the Northern Forum on Tuesday. (Loren Holmes / Alaska Dispatch News)

On the world stage, relations between the United States and Russia are tense and chilly, thanks to disputes over Ukraine, Syria and cybersecurity.

But in a ground-floor conference room in an Anchorage office building Monday, relations between Americans and Russians were warm and friendly as the state of Alaska officially rejoined a circumpolar organization called the Northern Forum.

Gov. Bill Walker and Yuri Zakharinsky, chairman of the Northern Forum's Regional Coordinators Committee, signed a document returning Alaska back into the fold of the organization that represents regional governments in the far north. Gifts and good wishes were exchanged, and participants meeting in the Atwood Building — the main state government administration site in Anchorage — spoke optimistically about their shared goals of improving lives in their remote part of the world.

[For now, the Arctic remains a refuge of friendly US-Russia relations]

There are good reasons to keep working through the Northern Forum to share best practices and to meet mutual challenges, Walker said in a brief speech.

"Here the state sees a chance to bypass some of the messages from Washington and Moscow and work toward the safety and security of Alaskans in a region where we share more than we compete," Walker said. "The Arctic must remain a zone of peace, and Alaska can continue to build bridges."

That sentiment was echoed by several officials representing regional governments in Russia, who spoke through interpreters at the meeting.

"We're very happy to see you back in our forum because we have very similar problems and economic situations in the north. The only way to solve them is to work together," said Eduard Isakov, a representative to Russia's Duma, or parliament, from the Khanty-Mansiysk Autonomous Region in western Siberia.

As the meeting continued Tuesday, another Russia official, Vladimir Vasiliev, a minister in Yakutia, was more emphatic: "For me personally it was kind of a shock in 2011 when Alaska made the decision to leave the Northern Forum." Alaska, he added, "was always understood" to be an important part of the Arctic.

"I hope that next year at about this same time we'll be able to say that the Northern Forum has strengthened, and it has lots of members and (is) working toward the interests of the peoples of the Arctic," Vasiliev said.

The Northern Forum was co-founded by Walter Hickel, a former Alaska governor and U.S. Interior Secretary with strong interest in Arctic and far-north affairs. In his remarks Monday, Walker referred to the late Hickel as a personal "mentor" who always emphasized Alaska's role in the far north.

"Whenever I would go into Gov. Hickel's office, every time, he would take me to the globe and say, 'Look at Alaska from the top down, and you'll see who our market is and who our partners are,' " Walker said.

Monday's signing ceremony came at the start of a three-day meeting of the Northern Forum's regional coordinators. Such meetings are usually held twice a year; this meeting was scheduled in Anchorage in part to coincide with Tuesday's Walter J. Hickel Day of the Arctic luncheon, an annual policy forum hosted by the Institute of the North, another Hickel creation.

The Northern Forum once had members from across the Arctic and subarctic. But the organization suffered atrophy since the early post-Soviet years to become a group mostly composed of far-north Russian regions. Its secretariat is in Yakutsk, far from Moscow and the national leaders there.

Alaska's membership lapsed a couple of years ago, said Nils Andreassen, executive director of the Institute of the North.

The increase in shipping in the Arctic, where summer and fall ice has become more scarce, is an opportunity for commerce, travel and general life improvements, he told the group. "The opening of the Arctic, we believe, is the equivalent to the opening of the Panama Canal decades ago," he said.

But it also poses risks. He cited safety concerns spurred by the upcoming journey of the Crystal Serenity, a luxury cruise ship scheduled to depart Seward next month for the first Alaska-originating cruise through the Northwest Passage. The U.S. Coast Guard "is quite nervous" about this journey, he said.

Alaska is not the only regional government returning to the Northern Forum. Finnish Lapland is making a similar move.

Walker said he was not sure why Alaska dropped out of the group. He conceded that there is a downside to returning to it — the $20,000 membership fee.

"I had to give long and hard thought about that," Walker said. In a brief interview outside the meeting, he acknowledged that the state belongs to other cross-border organizations.

"But I felt that it was definitely an investment in the future that was appropriate," he said.