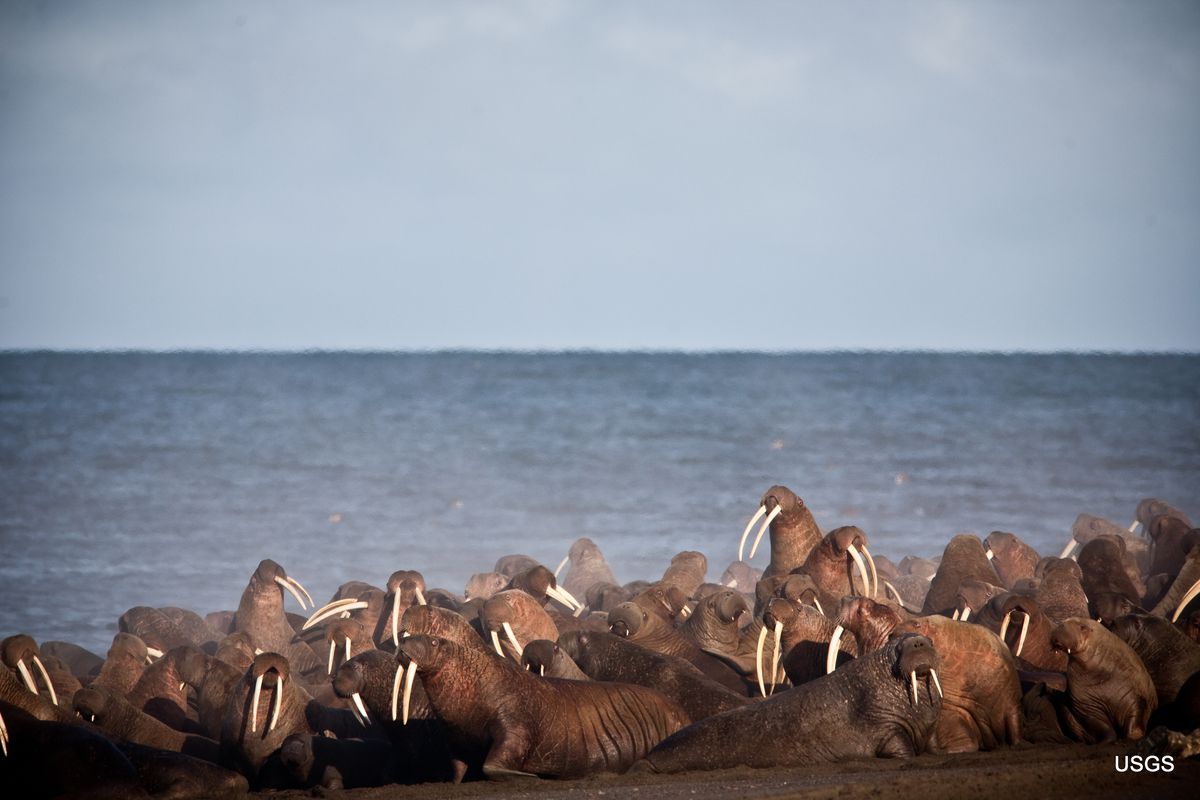 When Russian explorers sailed that nation's northeastern coastline along the Chukchi Sea in 1852, they were startled when they encountered about 150 belligerent walruses crowding a flat rock.

As they sailed toward the animals, they heard a "loud roar" that was "similar to an elephant's voice," said Carl von Ditmar, a Baltic-German scientist on the expedition. As the mariners approached the rock, "Walruses only raised their heads, terribly snorting and glaring at us with their big yellow eyes," he wrote in his book detailing travels and experiences in Kamchatka from 1851 to 1855.

Now that 19th-century account is part of a newly compiled United States-Russia database that tracks a century and a half of Pacific walrus haulouts onto shores of the Chukchi and Bering seas and the associated marine waters. The database, released by the U.S. Geological Survey, details records of onshore walrus gatherings of various sizes on both sides of the Bering Strait.

Walruses have long been pulling their large bodies out of the water to rest on shore, whether in groups of just a few or in big congregations of thousands, as the database shows. Big gatherings of males waiting for sea ice to recede typically congregate in places like western Alaska's Walrus Islands State Game Sanctuary.

But there is a new trend. Large concentrations of females and their young are hauling out in the northern areas of the species' habitat. The Chukchi Sea ice that those walruses previously used for resting platforms in between food-foraging dives has become increasingly scarce in summer and fall months.

"This trend of female haulouts up in the Chukchi Sea where they were previously hauling out on sea ice, that's the big difference," said Tony Fischbach, a co-author of the database and walrus expert at the U.S. Geological Survey.

Late-summer or early fall congregations of tens of thousands of adult females and calves have appeared nearly every year since 2007, a year of extreme ice melt, at a site near Point Lay on the Alaska side of the Chukchi. The behavior of animals when they are there is not always consistent, Fischbach said. Last year, for example, walruses that hauled up swam away quickly, possibly a sign that food in the area was more scarce than in other years, he said. "Last year they sort of hit the shore and headed straight to Russia," he said.

There are more big walrus congregations on the Russian side, though they have been less spotlighted than the Point Lay gathering. One such site is near the Chukotka village of Vankarem, where locals have set up patrols to keep the walruses undisturbed to prevent deadly stampedes. The patrols also aim to keep villagers safe from polar bears attracted to the walrus crowds.

At Chukotka's Cape Serdtse-Kamen, a site where walruses from Alaska and Russia converge in October and November before starting their southward migration, the animals used the land for haulouts only irregularly before 1990, and in crowds of no more than 12,000, according to Russian scientists. But now those haulouts are annual events, and the numbers are huge — nearly 100,000 amassed along a 12-mile coastline. It is likely that all the Chukchi walruses were ending up on the beach there at some point in the fall, according to the scientists.

Database co-author Anatoly Kochnev, a veteran biologist with the Russian Academy of Sciences, and his colleagues have been monitoring the site since 2009. The walruses have crowded around the cabin they use as a research station, and at times have pushed against the outer walls, Fischbach said.

The 1852 gathering recorded by von Ditmar was at a point near Cape Kronotsky on Russia's Kamchatka Peninsula. That area, near the southern part of the Pacific walruses' range, is now a nature reserve.

Von Ditmar's team watched the walruses as closely as possible, and he noted that the animals, seemingly ungainly on land, were graceful in the water. On the ground, the walrus body "by virtue of its own huge gravity completely flattened, like a bellows filled with viscous fluid," he wrote. But in the water, in "the native element, they with great ability and quickness began to swim, and somersault dive." The team shot some to dissect, triggering a stampede of survivors into the water, according to the account.

Modern methods of data collection are much more sophisticated than they were in von Ditmar's day. Scientists use digital photographs that allow them to count every image recorded. They track movements with devices that send signals to satellite. Fischbach and his colleagues have, most recently, combined radio telemetry with statistical modeling to predict activity patterns.

The scientists who compiled the database sought to use consistent methods, which evolved through technology, cross-border exchanges and legal protections  like the Marine Mammal Protection Act  enacted in 1972.

Combining modern observations with those made long ago was difficult, necessitating the use of broad estimates, he said.

"There's profound variability in how people assess the number of walruses on shore," he said. "In general, we take it all with a large grain of salt."