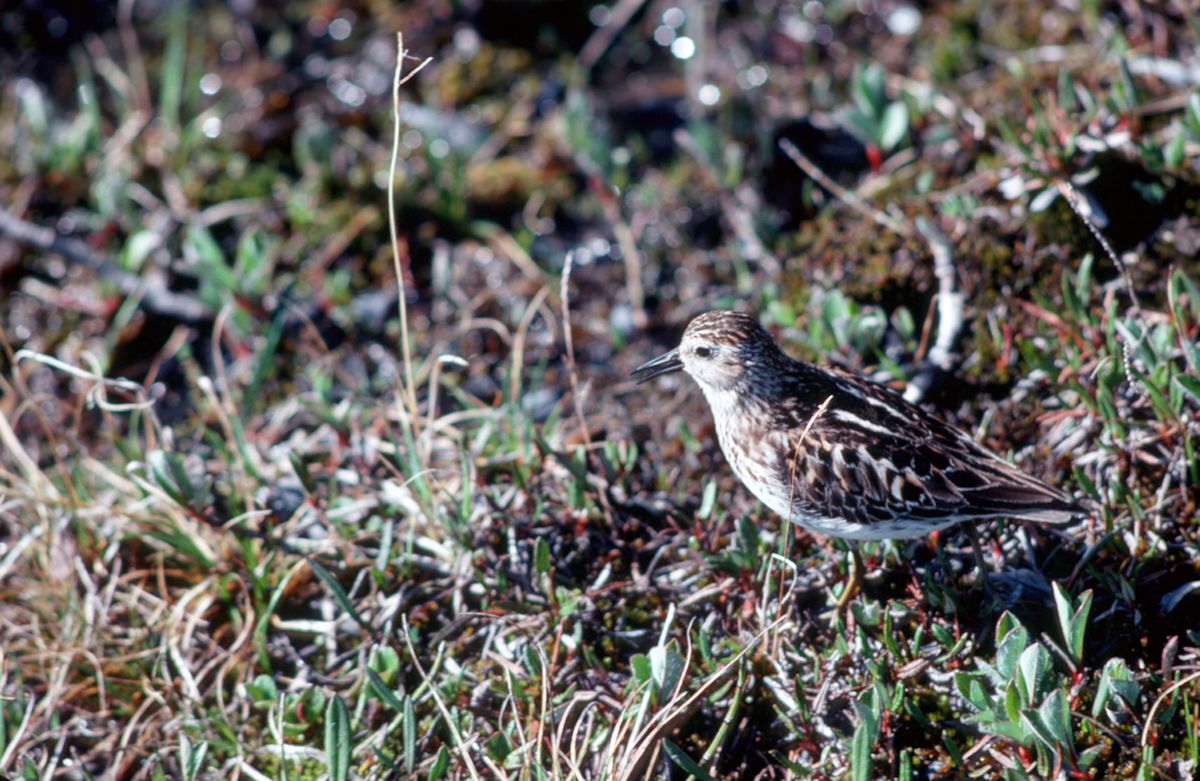 The Baird’s sandpiper is among the shorebirds expected to lose habitat to climate change in the future. (U.S. Fish and Wildlife Service)

The Baird’s sandpiper is among the shorebirds expected to lose habitat to climate change in the future. (U.S. Fish and Wildlife Service)

Many species of shorebirds that migrate to the Arctic each year to breed their young will lose substantial amounts of their summer habitat to climate change, and the biggest losses in the coming decades will be in Alaska and neighboring parts of Russia, new research concludes.

By 2070, higher temperatures brought on by climate change will eliminate important Arctic breeding habitat for at least two-thirds of the 24 bird species evaluated in a study published in the journal Global Change Biology, scientists predicted. Some species, like the Pacific golden plover and the red phalarope, are on track to lose nearly all of the suitable Arctic conditions they use in the summer, according to the study.

The study was led by scientists at Australia's University of Queensland and co-authored by scientists in Alaska, Norway, Russia and Denmark. It projects habitat conditions based on two different climate scenarios — an optimistic one that assumes greenhouse gas emissions will peak in 2040 and then decline, and a more aggressive warming scenario that assumes that greenhouse gas emissions will continue on their current trajectory.

Even under the more modest emissions scenario, the majority of the birds studied will lose large amounts of suitable Arctic breeding habitat, according to the study. Under the more extreme emissions scenario, some birds — the stilt sandpiper and curlew sandpiper — will lose all of their suitable breeding habitats, and other species will suffer losses in excess of 90 percent.

The study considers only temperature changes, said Rick Lanctot, Alaska shorebird coordinator for the U.S. Fish and Wildlife Service and a co-author of the study. It does not consider other climate-related factors that could also affect the shorebirds, such as northward expansion of predators like red foxes and shrubs that carnivores use for hiding when they stalk their prey, he said.

Greenhouse gases like carbon dioxide get their name from the "greenhouse effect" — like glass, they let solar energy in, but block the passage out of heating infrared light.

The birds are "hard-wired" to migrate according to daylight patterns, but their food sources are not. Insects, which the migratory birds eat, are "totally driven by temperature," Lanctot said. Early development of insects hurts both the migrating birds and their offspring, he said.

"If they emerge early and you're not there in time, then you're going to have your young hatch behind the eight ball, so to speak," he said.

Long-range migrators — birds that travel long distances without stopping — are more vulnerable to such warming-related mismatches, Lanctot said. One such species, though not evaluated in the study, is the bar-tailed godwit. "They fly pretty much nonstop from the Yellow Sea (between mainland China and the Korean Peninsula) to their breeding grounds," he said.

Among the species evaluated in the study, the red knot — a bird that flies to the Alaska tundra from wintering grounds as far away as Tierra del Fuego at the southern tip of South America — is among the most vulnerable.

Species that make lots of stops along the way, like the semipalminated sandpiper, which travels to the Arctic from the Midwest through the Canadian prairies, might be able to better adjust their migration schedules in response to changing conditions, Lanctot said.

"I think the wild card, though, is really how much the birds will adapt and change the way they're living," he said.

Overall, the Beringia area — Alaska and neighboring parts of Russia — is most susceptible to loss of breeding habitat simply because it has the most to lose, Lanctot said.

"It's got most of the species now," he said.

The Canadian Arctic islands and similar Arctic island areas in Europe are expected to be refuges for the studied birds, with the least habitat loss over the projected period. That area is also expected to be a refuge for sea ice and ice-dependent polar bears.

If habitat loss looms over Arctic-breeding shorebirds in the future, another problem has emerged in the present — elevated levels of mercury in some species.

A separate study of birds nesting on the North Slope and the Yukon River Delta found potentially troubling levels of mercury in the blood of some species nesting near Barrow. That study was published by The Condor: Ornithological Applications, a joint publication of the American Ornithologists' Union and Cooper Ornithological Society.

According to the results of that study, mean mercury concentrations for semipalated sandpipers nesting near that community were high enough to signal possible reproductive problems. There were similarly elevated levels in the blood of individual red phalaropes, long-billed dowitchers and pectoral sandpipers nesting near Barrow, said the study, which was also co-authored by Lanctot.

The new study parallels findings in a 2014 report to the Fish and Wildlife Service that cataloged mercury concentrations in breeding shorebirds using sites from the Nome area to Bylot Island in the Arctic Canada territory of Nunavut. Of the 2,478 samples collected in 2012 and 2012, those from the Barrow area had the higher mercury levels.

Mercury released into the air and water elsewhere in the world is, like other contaminants, brought north on currents in the atmosphere and oceans, and carried northward by rivers. More regional releases can be triggered by climate warming.

Some of the mercury in the environment comes from natural sources, like volcanic eruptions and wildfires. Some is the result of human activities, like the burning of fossil fuels, particularly coal, and pollution from mining.

Climate change speeds some releases through such forces as the increase in wildfires linked to climate warming and the thaw of permafrost, which releases elemental mercury previously locked in frozen peat, allowing it to be converted to toxic methylmercury.

The precise contribution of each mercury source in Alaska's Arctic region is yet to be determined. "We just don't have enough information to say, 'this is the biggest contributor,' " said Matz, who was not part of the new study.

Why Barrow stands out is also yet to be understood, she said. There are abundant wetlands, and mercury is more present in wet areas than in dry, she said. Barrow is a sizeable community, so local air emissions might be a factor, she said. Barrow's geological position might also play a role, she said.

"Barrow sticks out into the Arctic Ocean," Matz said.

The studied shorebirds are small and are not generally hunted by people for food. But the mercury in their blood is an indicator of what is happening in the larger environment, she said.

When it gets into the food chain, mercury spreads from tiny forms of life to "small invertebrates to large invertebrates to fish to things that eat the fish, including humans. And it's toxic," said Matz. "So that's why we're concerned about it."