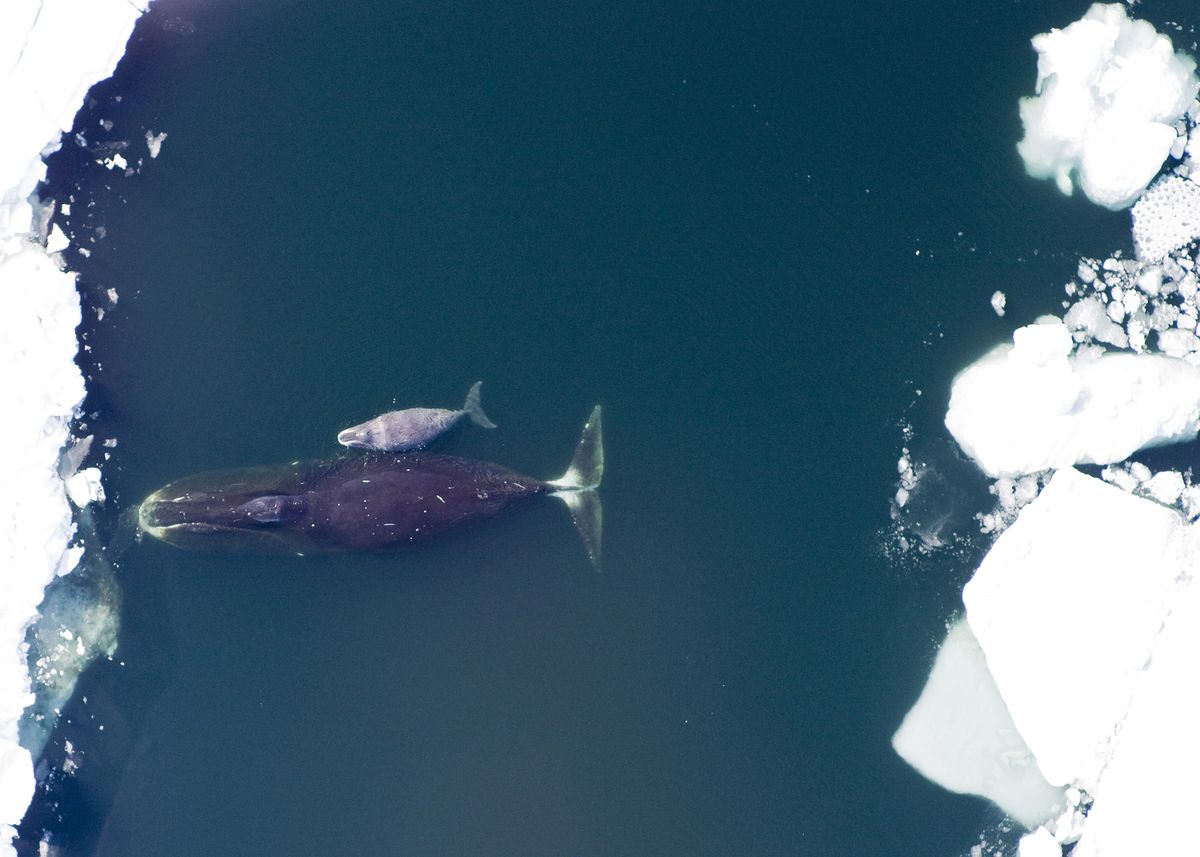 A bowhead whale and calf. The Arctic’s largest mammals, they sometimes grow to 60 feet long and live for 200 years. (Corey Accardo / National Oceanic and Atmospheric Administration)

A bowhead whale and calf. The Arctic’s largest mammals, they sometimes grow to 60 feet long and live for 200 years. (Corey Accardo / National Oceanic and Atmospheric Administration)

BARROW – About 23,600 square miles of Arctic sea ice melted every day in May, a record-high amount.

That is good news for one group: bowhead whales, the Arctic's largest marine mammal.

Warming temperatures are leading to a massive sea-ice melt that's troublesome for Alaska Natives and polar bears. Both rely on the ice to launch hunts. But the melt also seems to boost food availability, at least if you're a bowhead.

Heat from the sun causes a surge in phytoplankton blooms, a food source for the crustaceans that are key to whales' diets. The melt thins sea-ice density, which eases movement for whales and their prey, and it revs up sea storms and wind, which helps nutrients reach the surface.

To get a sense of how massive this shift is, consider this: Summer sea ice has declined by more than 10 percent per decade since 1979. This means that what was once frozen sea in August and September isn't frozen anymore. Temperatures have heated up so much that the annual melting season has increased by about 20 days.

Decades of warming waters have caused recent milestones. In April, snow cover in the Northern Hemisphere reached its lowest point in half a century. A month later, the total amount of ice fell below that recorded at any time in the previous 38 years.

"Bottom line is, changes here have been incredible," says Craig George, a senior bowhead biologist for the North Slope Borough Department of Wildlife Management in Barrow, an Arctic community of 4,500. The biggest shot in the arm, for the whales anyway, has been the sea-ice melt, which creates a "better light penetration as sunlight hits nutrients in the photogenic zone."

Wedged between the Chukchi and Beaufort seas 1,200 miles from the North Pole, Barrow is the perfect place to study bowheads, which live exclusively in frigid Arctic waters from Russia to Greenland, migrating through the far north to follow the ebb and flow of the ice.

George has spent nearly 40 years studying the whales; he was here in 1982 when underwater microphones were used for the first time to locate them for a population study. "We were able to find the animals under the ice and way offshore," George recalls.

The largest Arctic mammal, sometimes growing 60 feet long, bowheads have the greatest known longevity of any mammal. Some have lived for 200 years. They also have the lowest body-core temperature, which allows them to survive in the frigid Arctic, and the largest head-to-body-length ratio, which allows them to eat more. There are even hermaphrodites – whales that have male and female sex organs – among this species.

A paper that he co-authored in 2015 reported that from 1989 to 2011, subadult bowhead whales in the Beaufort Sea showed a 2.7 percent increase in body size per decade. While that may not sound like much, it translates to about a ton or two per whale. "A fat whale is a healthy whale, unlike humans," George says.

"It's fairly clear why it's happening now," George says. "Bowheads are experiencing improved conditions" that are allowing them to expand their territory now that the ice restricts them less and more young are being born than previously.

Aerial surveys by the National Oceanic and Atmospheric Administration in 2013 revealed the highest calving rate in at least 35 years. "With a large whale, that's probably the single best indicator that things are good because it's such an investment to pull off a calf," George notes.

Listed since 1973 as a threatened species, George thinks the whale should be delisted because its numbers have rebounded in recent years.

In 2011, when the last official count was done, there were an estimated 17,000 bowheads. George thinks that the population may now be as high as 20,000. A relatively pristine habitat, low natural mortality and a carefully managed hunt by local populations – only 56 a year can legally be hunted – have helped steady numbers.

"It's a very complex issue up there," says Stephen Trumble, a biologist at Baylor University who was not part of the 2015 study but has spent the past five years analyzing bowhead earwax from whales found in Barrow. Because a bowhead's earplug, as the wax is called, grows in annual layers like the rings of a tree – it weighs two pounds – Trumble says it can measure both the age of these mammals and potentially show the effect of improvements in diet.

But it's hard getting hold of earplugs from a gigantic creature, even a dead one. His single recent sample comes from Barrow, one of the only places available to scientists, and he worked with George to get it. The only other sample Trumble has is from the Natural History Museum in Los Angeles. Trumble says he'd need more than that to gauge the impact of an improved diet.

George is not making any predictions about the bowhead's future. He notes that the warming seas have made it possible for orcas to come into the Arctic feeding grounds, which could have a negative impact on bowheads. "I'm not saying that they'll do well forever. Who knows? When it becomes a sub-Arctic sea" as sea temperatures rise, "how it will affect bowheads? We just don't know."