Alaska maps released this week are most precise ever 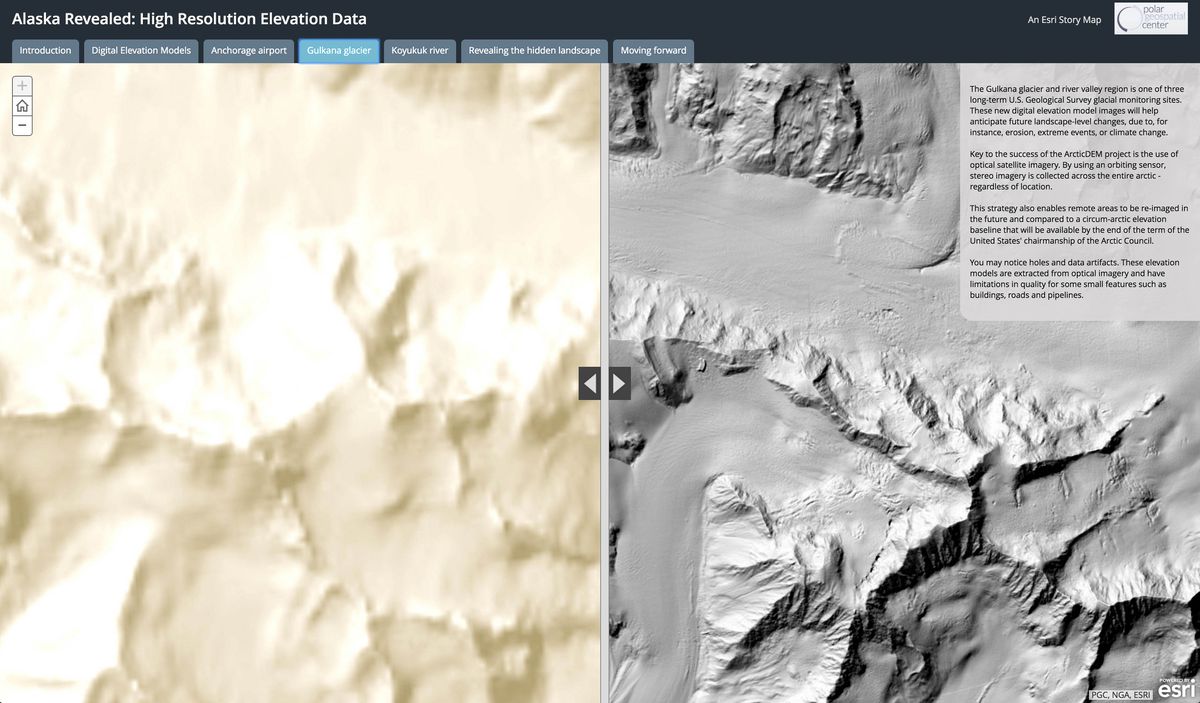 The Gulkana glacier and river valley region is one of three long-term U.S. Geological Survey glacial monitoring sites. The map on the right shows an image based on a new dataset that was recently collected by Digital Globe for the National Geospatial-Intelligence Agency. The map on the left shows the National Elevation Dataset, or NED. It is currently the best full-coverage collection available for the United States. (PGC, NGA, ESRI)

The Gulkana glacier and river valley region is one of three long-term U.S. Geological Survey glacial monitoring sites. The map on the right shows an image based on a new dataset that was recently collected by Digital Globe for the National Geospatial-Intelligence Agency. The map on the left shows the National Elevation Dataset, or NED. It is currently the best full-coverage collection available for the United States. (PGC, NGA, ESRI)

From the Aleutian Islands to the North Slope, Alaska's massive and varied terrain has now been mapped in an unprecedented way, exactly a year after President Barack Obama announced the new Arctic mapping project during his visit to Alaska.

The first fruits of the mapping project were released Sept. 1, said Paul Morin, director of the Polar Geospatial Center at the University of Minnesota, a leading partner in the project.

"For us, this really is a game changer," Morin said. "We can see and create this topographic data for the most remote places on earth, and it could not have come too soon. With climate change right now, we need to be able to … understand what's happening to the planet."

"When President Obama announces a project, it tends to help the project, I can guarantee you that," Morin said.

It's a unique collaboration, said Tom Heinrichs, director of the Geographic Information Network of Alaska at the University of Alaska, Fairbanks.

The National Geospatial-Intelligence Agency is usually insular and secretive with its data, he said, so opening up information between agencies has benefited mapping science itself.

"They've revolutionized the way topographic maps are made," Heinrichs said.

Three satellites have been collecting data over the Arctic, producing images with a resolution between about 7 to 16 feet.

Practically, the applications are wide-reaching, Morin said – from aircraft safety, to civil engineering, to biology.

People can see mountain ranges, collapsing permafrost, airports, the pipeline or their own homes. "You can see individual trees and bushes," Morin said.

And because a large data set has been collected over several years, environmental changes can be tracked over time.

"You can play back Columbia glacier, and you can see the glacier retreat … you can actually measure the amount of ice that's lost," Morin said.

"One really important aspect of it is we're going to have a snapshot in time of the entire circum-Arctic," Heinrichs said, which is critical now, as the world experiences climate change.

"We can see coastal erosion, we can see changes in glaciers," Heinrichs said.

[Shishmaref votes to relocate from eroding barrier island to mainland]

"It's important to Alaska because it actually shows you what Alaska is … this is one of the most important earth-science data sets," Morin said.

For the U.S. it's also important. "This is our sovereign territory. This is what we need for planning," Morin said.

Before this project, Alaska's topographical maps were at 196-foot resolution. The U.S. Geological Survey has also undergone a large project to map the state at a 16-foot resolution, and have completed about half the state.

Many states already have high-quality data from airplanes flying at a low elevation, but Alaska – a massive state, at 663,300 square miles — costs are prohibitive. But now, Alaska's topography rivals that of many Western states, where many places are mapped at 33-feet resolution, Morin said.

Holes in the data still exist, appearing as blank spots on the map. Those will be filled in as the three satellites continue to orbit the earth and collect more data, Morin said.

Notably, nearly all of Southeast Alaska is left out of the map, as cloudy weather has continued to foil attempts to record images.

"Southeast has been a very, very challenging place to work," Morin said.

The project will continue for two more years. The next stage of the project is to map the entire Arctic. "What you're seeing in Alaska right now, we're going to be able to see all across the Arctic in a year or two," Morin said.