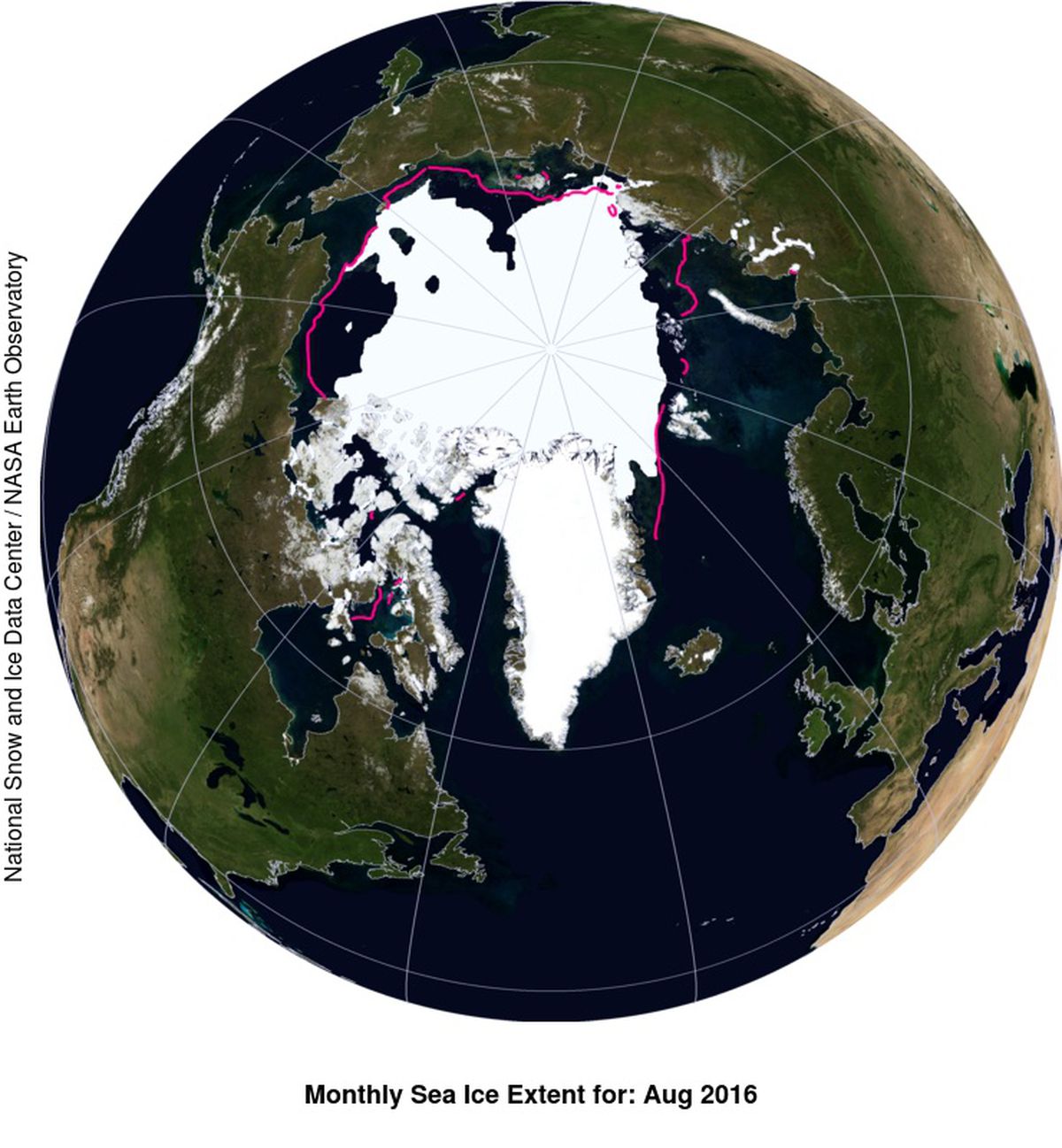 Arctic sea ice is nearing the end of its annual melt, and one outcome is certain: 2016 will have either the second-lowest or third-lowest minimum extent measured since satellites began mapping ice.

Sea ice extent — the area of sea surface covered at least 15 percent by ice — has fallen below the minimum reached in 2011, which had been the third-lowest minimum recorded since satellite measurements began in 1979, according to the National Snow and Ice Data Center in Boulder, Colorado. Extent is now tracking slightly below the 2007 level for this time of year but well above the record low in 2012.

A notable characteristic of this year's ice is its low concentration, even at very high latitudes. Even near the North Pole, ice is broken, with a lot of open water exposed, according to satellite readings.

"You can take a boat up to 86 degrees north," Serreze said. "I don't know if we've ever seen that before, but it's certainly an eye-opener."

[Farming in the Arctic? Not exactly, but a visit from the federal Farm Service Agency head prompts talk of possibilities]

Imagery has improved with a new satellite, he noted.

Sea ice has been relatively sparse all year, with record lows set for several months. Cloudy and cool weather, however, helped slow the melt earlier in the summer, the center said in its monthly report, issued Wednesday. The average August extent was the fourth lowest for that month. But two Arctic cyclones in August appeared to have accelerated melt by stirring up the broken ice.

In other years, such storms have brought cooler conditions that "have not been conducive to losing a lot of ice in the summer," Serreze said.  This year, however, with ice thinner than it used to be, the storms appear to have had the opposite effect. "It may be that now you're mixing warmer waters up," he said. The old patterns may no longer apply, he said.

Large waves used to be rare in the western Arctic Ocean but are becoming more common as open-water areas expand, the center said in its monthly report. Waves of up to 19 feet were recorded during the August cyclones, the center said.

The long-term trend to more open Arctic water over the past three decades has numerous spinoff effects.

With Arctic ice volume above the Pacific Ocean down 75 percent, late-summer extent down 50 percent and the open-water season expanded by four to six weeks, the region has become a friendlier habitat for some baleen whales, according to a new paper in the journal Biology Letters, published by the Royal Society of Britain.

Humpback, minke and fin whales, which up to the 1980s were not seen north of the Bering Strait, are now commonly spotted in the Chukchi Sea, said the paper, and bowhead whales have flourished. The baleen whales eat plankton and copepods — tiny crustaceans — that are more prolific in open water or water with only thin ice coverage, but the benefit to baleen whales may be only temporary, according to the paper.

Arctic shipping routes, which are open this year, are expected to become navigable for much longer periods in future decades, according to a study newly published in the journal Geophysical Research letters. The study, by University of Reading scientists, predicts that by midcentury, Arctic shipping routes will be navigable for annual periods that are twice as long as they are now.