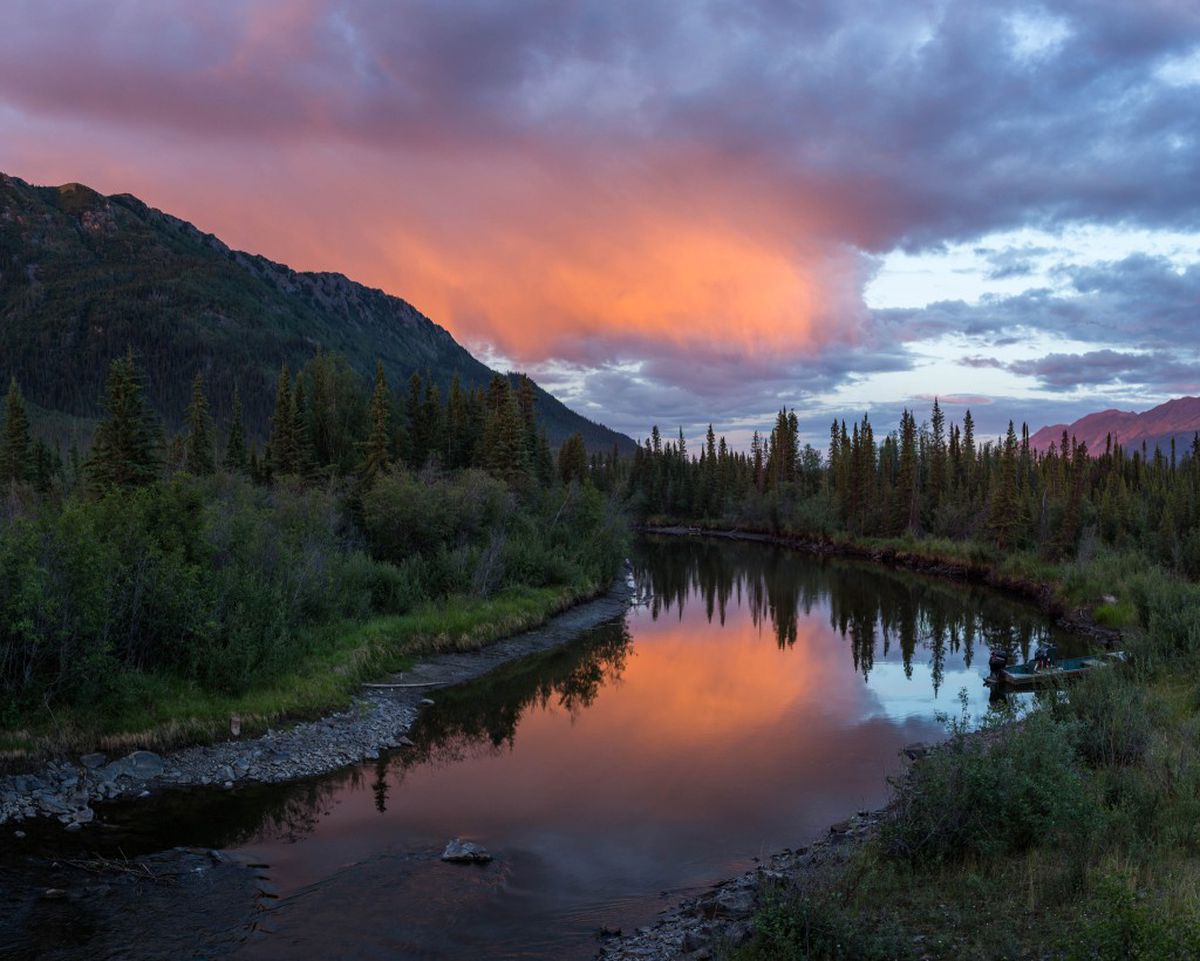 Sunset on a tributary of the White River, south of Beaver Creek, Yukon, in June 2015. (Loren Holmes / Alaska Dispatch News)

Sunset on a tributary of the White River, south of Beaver Creek, Yukon, in June 2015. (Loren Holmes / Alaska Dispatch News)

In the days of poet Robert Service more than a century ago, Canada's Yukon territory was almost as notorious for its fierce cold as it was for the powerful gold fever that gripped stampeders who rushed into the Klondike.

"Talk of your cold! through the parka's fold/ It stabbed like a driven nail," the Bard of the Yukon wrote in a poem that told the tale of a Gold Rush miner who got warm only when his corpse was cremated.

But by the end of this century, expect the Yukon to feel less like the Arctic and more like the northern Rocky Mountain and prairie regions, according to a new study that examines "cliomes," the term used to describe localized climates that support distinct habitats.

Of 17 existing Yukon cliomes, seven will probably disappear by 2100, and one new one — favorable to prairie grasslands — will spread from the south, according to the study, published in the peer-reviewed journal Global Ecology and Conservation.

Northern Yukon, where the changes are expected to be most dramatic, will no longer have climate conditions that favor arctic tundra, according to the study. In the mountains of northern and central Yukon, the climate will favor boreal forests instead of alpine tundra now found there. In the southern part of the territory, the climate will become more like that found in the prairies of Saskatchewan and Manitoba.

"It doesn't mean we're going to be planting canola soon, but it does mean that we're going to see a disconnect with the ecosystem and the climate," said Nancy Fresco of the University of Alaska Fairbanks, a co-author of the study.

A lag occurs between the arrival of a new climate and the spread of new types of vegetation and other features that match the climate and make up an ecosystem, said Fresco, coordinator of UAF's Scenarios Network for Alaska and Arctic Planning program (SNAP).

The triangle-shaped Canadian territory of the Yukon runs from thick forests of spruce, pine and aspen in its southeast corner to the Arctic Ocean shoreline on the north. It holds Mount Logan, Canada's tallest peak, vast glacial fields, open plateaus and dry valleys.

Climate change will jumble conditions in those local areas, with some areas taking several shifts to warmer climate types over the coming decades, according to the study.

The new study is an outgrowth of an earlier project that spanned Alaska and neighboring parts of Canada. The project produced an Alaska-Canada report that is posted on the SNAP website. The Yukon section is the first to be in a peer-reviewed paper published in a scientific journal, Fresco said.

It is a rare scientific spotlight for the far northwestern region of Canada, an area often overlooked in global discussions about climate change.

Alaska and its warming climate get wide attention — and even had a high-profile presidential visit in 2015 — but the Yukon and the neighboring Northwest Territories have similar climate conditions, Fresco said. The territories, with their sparse populations and small communities, have government agencies that study climate issues but lack big research institutions that would be the equivalent of UAF.

"They don't really have that resource," Fresco said. For that reason, UAF's SNAP program has established Canadian partners and has done some long-term Canada-specific forecasts, such as an evaluation of the Yukon's water resources and the Northwest Territories' Great Bear Lake.

Significant changes in the Yukon have already been measured.

Average temperatures in the territory have increased by 2 degrees Celsius (about 3 ½ degrees Fahrenheit) over the last 50 years, and by 4 degrees Celsius (just over 7 degrees Fahrenheit) in winter, according to Environment Yukon, the territorial government's environmental agency. Yukon glaciers have lost nearly a quarter of their surface area since 1958, and glacial melt is causing water shortages in some places — including the total disappearance of one river this summer — and flooding in others, according to Environment Yukon.

When severe wildfire sweeps into the boreal forest, the permafrost goes away.

That is the lesson in a new study that examined wildfire-hit portions of the White Mountains in Interior Alaska. The study, by scientists based in Fairbanks and Anchorage and published in the Switzerland-based journal Remote Sensing, used measurements at 30 field sites where severe fires burned a decade prior.

The scientists pushed probes into the ground to search for the hard-frozen permafrost layer in an area badly scorched in 2004, the all-time record Alaska fire season. At 90 percent of those sites, examined in 2014, there was no permafrost, they found.

It appears that severe fire — a burn that leaves only a thin layer of organic matter on the forest floor — leaves the frozen soil below vulnerable. But a thaw might take time and unfold over a long period with varying winter conditions, said lead author Dana Brown of UAF.

To get to their findings, the researchers used methods that were both low-tech — the probes they poked into the earth — and high-tech. The high-tech tools were satellite data sets that described topography and burn severity in the study area. To identify sites that were severely burned in 2004, the study employed an index that, Brown said, roughly corresponded to no more than 5 centimeters (about 2 inches) of organic layer left on the forest ground.

It is impossible to conclude that all of the monitored sites lost permafrost, Brown cautioned. Permafrost in that part of Alaska is patchy, so it is unknown whether it existed prior to the fire at all of the monitored sites. But permafrost was present at additional control sites used in the study, so the likelihood is high that the fire-scorched test sites also had it prior to the burning, she said.

Permafrost loss does not necessarily cause conditions to be more flammable in the future, she said. What often happens is that easily burned spruce is replaced by harder-to-burn hardwood trees like birch.

"What we see in Interior Alaska is a lot of deciduous forest (that) does not have permafrost underlying it," she said.

But for some reason, these study areas in the White Mountains have not seen deciduous trees replacing spruce, she said.

Permafrost can also return to a site, growing back over successive cold seasons, she added. But she doubts that will happen in a significant way at the sites she studied.

"With the current climate, it's becoming less and less likely that the permafrost will recover," she said.

The flat landscape of the central North Slope is, upon closer inspection, less flat than it used to be, thanks to climate change and oil development, says a new study by UAF scientists. Cracks between polygon-shaped wedges in the tundra are deeper and bigger areas of water are pooling, according to the study, published in the journal Environmental Research Letters.

Warming around the Arctic has stimulated the northward spread of shrubs and other plant growth, but the index used for the Central North Slope generally did not register that effect. There were mixed signals, and the wetter conditions may be masking expansion of plants on the central North Slope, the study found.

It will take some close-up, on-the-ground surveys to determine what has been happening with plants in that region, said Martha Raynolds of UAF, the lead author. Raynolds has worked for several years to track that region's changes caused by oil development and a rapidly warming climate.

The new study uses satellite imagery captured from 1985 to 2011. Some changes are the obvious result of oil development — new roads and islands that have been constructed, for example, along with erosion along some of those man-made features.

The active tundra layer — the layer below the surface where thaw happens each year — is getting thicker, and that sends more liquid water flowing freely. On the North Slope, that has resulted in deepened cracks in the tundra's polygon pattern, Raynolds said.

Permafrost thaw and the changes it triggers can cause problems for North Slope oil operators, Raynolds said. If a pipeline is running across one of the ice-wedge areas that start to shift, for example, the supports that hold the pipeline can sag, she said.