Killer whales in once-icy Arctic waters are scaring away narwhals 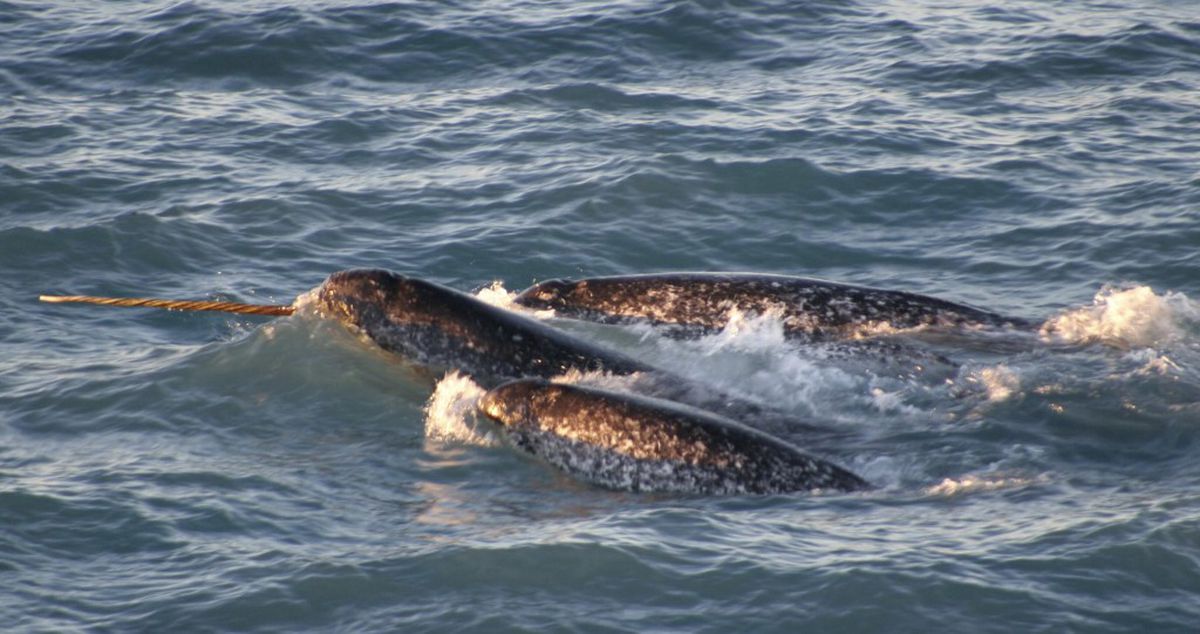 In a photo provided by the National Oceanic and Atmospheric Administration, a pod of narwhals surfaces in the waters off northern Canada in August, 2005. (Kristin Laidre/NOAA)

In a photo provided by the National Oceanic and Atmospheric Administration, a pod of narwhals surfaces in the waters off northern Canada in August, 2005. (Kristin Laidre/NOAA)

When orcas invade their Arctic territory, narwhals flee, possibly even before the predatory newcomers make any attacks, according to new research.

A study that simultaneously tracked movement of both species in a portion of the Canadian Arctic found that as soon as killer whales were within about 65 miles of narwhals, narwhals swam with faster and longer movements than normal to shallower waters close to shore.

Once the orcas left the area, the narwhals returned to their normal swimming patterns in deep offshore waters, the study found.

The results were surprising, said lead author Greg Breed of the Institute of Arctic Biology at the University of Alaska Fairbanks. The scientists expected narwhals to be scared away by killer whales but not in such an immediate and uniform pattern triggered by the predators' mere presence, he said.

"We went into it thinking the narwhal are going to be running all over the place, and as soon as they're done, they're going to go back to normal," he said. "That's not at all what we saw."

[Could this giant polar bear skull be from the legendary 'weasel bear'?]

Narwhals, known for their distinctive long tusks and sometimes referred to as "unicorns of the sea," thrive in areas of heavy pack ice.

But as sea ice diminishes and open-water access increases, orcas are becoming more common in the Arctic waters off eastern Canada and Greenland that are home to most of the world's narwhals.

In Alaska as well, orcas have been expanding their range northward through the Bering Strait into the Chukchi Sea, as have normally subarctic humpback and fin whales.

The new study, by Breed and scientists from Oceans Canada and other Canadian institutions, was published in the Proceedings of the National Academy of Sciences. It used satellite-tracking data collected in 2009 in Admiralty Inlet, a deep fjord off northern Baffin Island.

Killer whales are not entirely new to Admiralty Inlet, a body of water that is a partially enclosed marine ecosystem. But orca numbers there have increased substantially, Breed said. "There definitely has been an uptick in sightings in the last decade or two, by an order of magnitude," he said.

The study was the first to use simultaneous satellite tracking of any marine predator and prey species, not an easy feat, Breed said. The killer whales' movement was tracked by tags temporarily attached to the blubber, while the narwhals were tracked by devices attached to their dorsal ridges.

"They seemed to know instantly across the entire population once the killer whales left, and that was the real surprise," Breed said.

The telemetry data, which was also collected in years beyond 2009, confirms observations made by the region's indigenous people. The Inuit of Baffin Bay watched marine mammals swim away from the meat-eating predators and have a term for the behavior, Aarlirijuk, meaning "fear of killer whales."

Those observations are detailed in a Canadian study published in 2012. One local resident told researchers that he saw a narwhal partially beach itself to avoid killer whales, and others "said there were once so many narwhal on shore that people could even touch them," said that study, published in the journal Aquatic Biosystems.

As for the narwhals in the new study, it is unknown whether any of the tagged animals were individually targeted by killer whales, Breed said. All survived during the study period, so any attacks that might have happened were unsuccessful, he said.

The study has implications for other Arctic marine mammals that might be prey to increasing numbers of killer whales, Breed said. Killer whales might not have to eat the prey species to disrupt their populations, he said.
"They might just have to scare them," he said.

If scared-off seals and other marine mammals flee to areas of inferior habitat, they might find less food and have lower rates of survival and reproduction, he said.