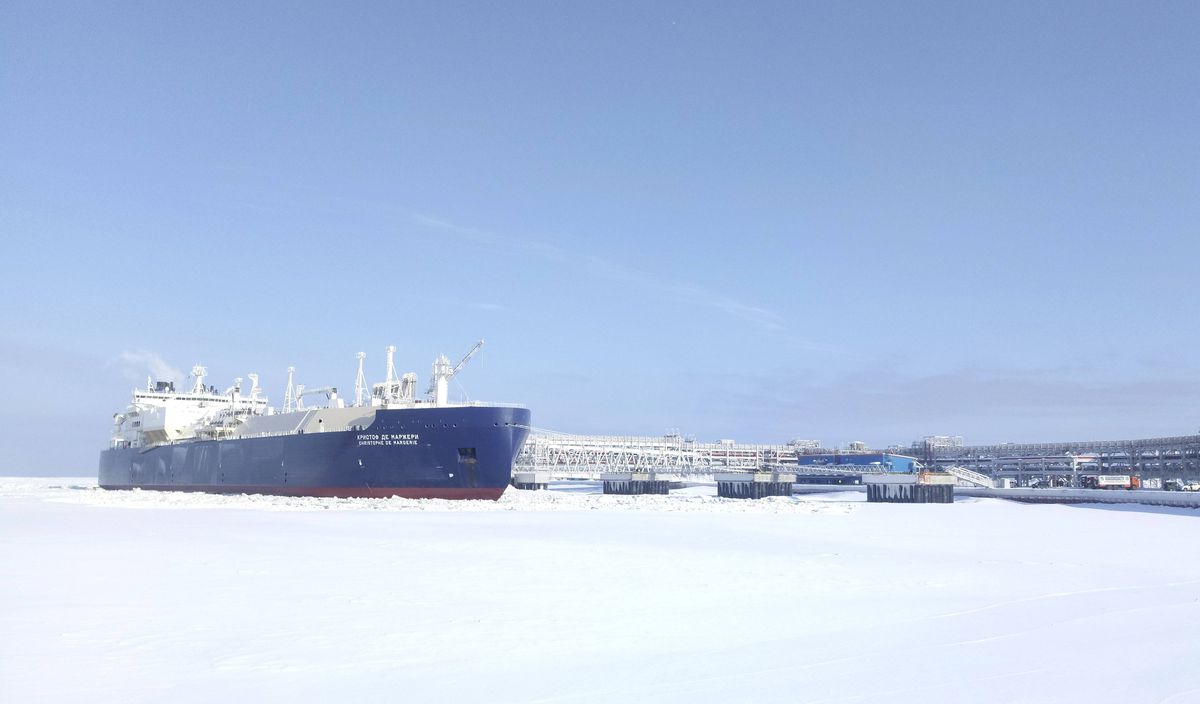 SABETTA, Russia — An ice-breaking liquefied natural gas tanker docked for the first time at Russia's Arctic port of Sabetta to test a new route that could open the ice-bound Arctic Ocean to ships carrying oil and liquefied gas.

The route is eagerly anticipated by energy firms that want to develop resources in the Arctic but face obstacles in getting oil and gas from remote and freezing fields to world markets.

Environmental activists fear commercial shipping in the Arctic — now possible because climate change has thinned the ice for part of the year — will allow exploitation of a region that up to now has been a pristine wilderness.

The 80,000-tonne-capacity Christophe de Margerie, an ice-class tanker fitted out to transport LNG, docked in the icy port of Sabetta, with Russian President Vladimir Putin watching via live video-link.

Putin congratulated the crew and energy company officials gathered on the ship's bridge, saying: "This is a big event in the opening up of the Arctic."

The South Korean-built vessel was not picking up a cargo on its maiden voyage, but will eventually be used to transport gas from Russia's Yamal LNG plant, which is near the port.

The project, scheduled to start production in October, is led by Russian firm Novatek and co-owned by France's Total , and China's CNPC and the Silk Road Fund.

The ship is named after a former Total chief executive who died at a Moscow airport in 2014 when a snow-clearing tractor crossed the runway as his private jet was taking off.

The Yamal LNG consortium sees Asia as the biggest market for its gas in the long term. Shipments to China from Yamal should take about 18 days using the Northern Sea Route.

That journey would take vessels east through the Arctic Ocean, down through the Bering strait that separates Russia from Alaska, and into the Pacific.

By contrast the alternative route involves heading west into the North Atlantic, south into the Mediterranean, and then through the Suez Canal into the Indian Ocean. That would typically take about 32 days.

The tanker arrived at Sabetta earlier this week, after departing South Korea in November and sailing around Africa into the Atlantic, according to Reuters data.

The aim of the voyage was to prove the port can receive a tanker of that class. Other LNG tankers have already sailed via the Northern Sea Route from Scandinavia to the Pacific.

The Arctic's energy resources offer huge promise for Russia, heavily dependent on oil and gas exports. Many of its Siberian fields are growing old, forcing it to look to more remote areas for new reserves.

Its push into the Arctic — accompanied by a military build-up — has alarmed the West. U.S. Defense Secretary James Mattis has described Moscow's Arctic moves as "aggressive steps."

Putin said projects such as infrastructure along the Northern Sea Route would allow Russia to become the world's largest LNG producer.

Qatar is currently the world's top LNG producer, followed by Australia, Nigeria, and Trinidad and Tobago.

After the Yamal plant reaches its full capacity, combined with the existing Sakhalin-2 LNG plant in the Pacific, Russia will produce almost 27 million tonnes of LNG annually, equal to the amount imported by China per year.

Novatek is studying whether to build another LNG plant, Arctic LNG-2, with capacity comparable to Yamal or higher and first production in around 2023.

Putin said Russia's energy projects in the Arctic were guided by the principle that they should do no harm.

Ice-class tankers usually have double hulls, strengthened structures to withstand battering from the ice, and reinforced propellers. The Christophe de Margerie is capable of moving through ice as thick as 2.1 meters or nearly 7 feet.

The ship will only be able to navigate the northern route from July to September each year, because the ice is too thick at other times, according to Sovcomflot, the Russian state shipping firm that owns the vessel.

A total of 15 gas tankers will be built for the Yamal project by Daewoo.

Environmentalists say too little is known about the impact of the new route on the Arctic's ecology.

Alexei Knizhnikov, Russian oil and gas environmental policy officer for international campaign group WWF, said measures were needed to mitigate the risk of heavy oil from the ship's engines leaking into the sea.

He said ships could disturb wildlife such as walruses and whales.

Additional reporting by Oksana Kobzeva and Denis Pinchuk in Arkhangelsk and Gleb Stolyarov in Moscow.