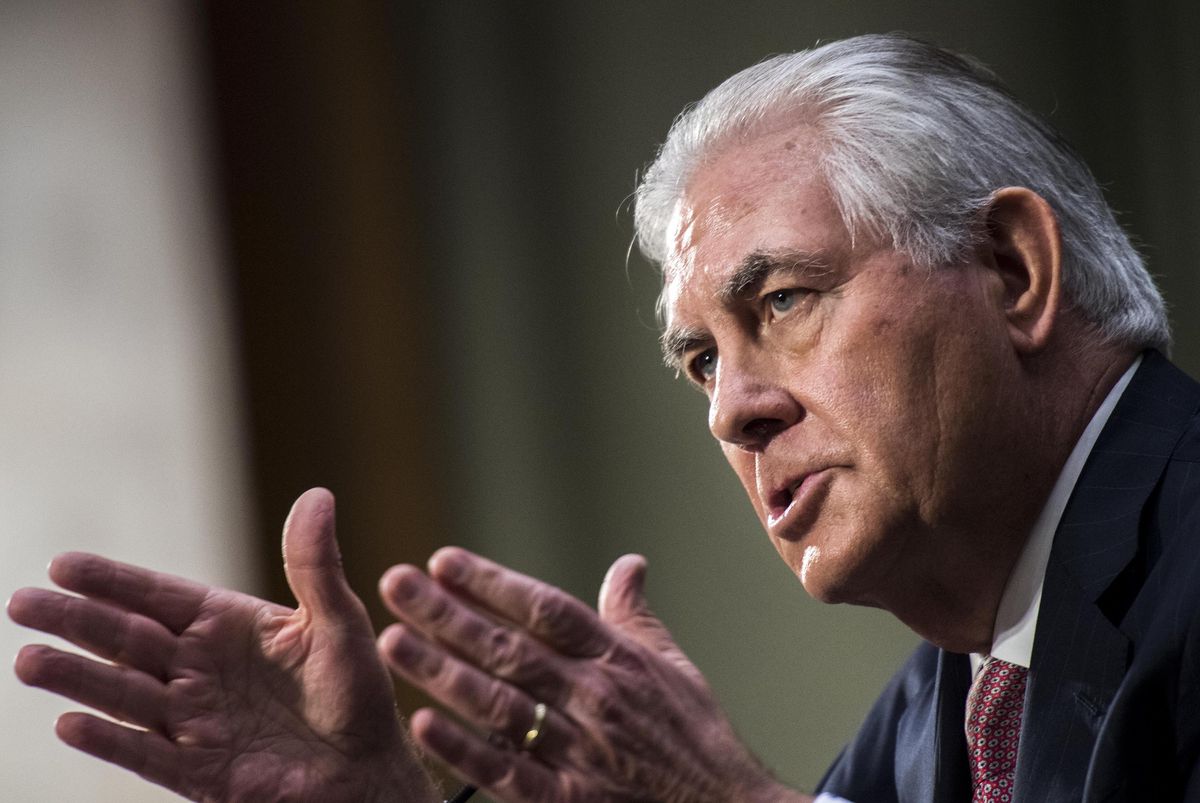 Secretary of State Rex Tillerson says that scientists’ ability to predict the impact of greenhouse gases in the atmosphere “is very limited.” Tillerson is expected to attend an Arctic Council ministerial meeting in Fairbanks later this month, where climate change will be a key topic. (Washington Post photo by Melina Mara)

Secretary of State Rex Tillerson says that scientists’ ability to predict the impact of greenhouse gases in the atmosphere “is very limited.” Tillerson is expected to attend an Arctic Council ministerial meeting in Fairbanks later this month, where climate change will be a key topic. (Washington Post photo by Melina Mara)

As top diplomats, scientists and other experts prepare to converge on Fairbanks for what's shaping up to be the year's most important Arctic meeting, a question looms: Will the United States, under the leadership of President Donald Trump, interfere with the other seven Arctic nations' efforts to collectively address climate change?

For the eight-nation Arctic Council, climate change has been a cornerstone issue. The council focuses much of its work on coping with climate warming that is erasing sea ice, melting glaciers, thawing permafrost, accelerating coastal erosion and opening new shipping lanes. And in the far north, climate change is occurring at least twice as fast as the global rate.

The two-year U.S. chairmanship of the Arctic Council started in 2015 and ends with the Fairbanks ministerial meeting on May 11. Under U.S. guidance, the council emphasized climate science, climate-change mitigation and projects to help Arctic residents respond and adapt to rapid change in their part of the world.

But that was the Obama administration policy. President Donald Trump, four months into his term, has dismissed climate change as a hoax and is leading an administration that has stricken climate-change information from public view. The administration has sought to ax all federal spending on climate-change research and has reversed several policies that limited greenhouse gas emissions and air and water pollution.

Just on Friday, Trump revoked an Obama-era, Arctic-related order that had been crafted by Alaska Natives in the Bering Sea region who are "faced with the devastating effects of climate change and the dramatic increase of large scale shipping right on our front doorstep," in the words of the Bering Strait Elders Group, a tribal organization.

Trump has yet to strike a clear position on whether the United States will abide by the emissions-reduction commitments made in 2015 in the United Nations' Paris Agreement on climate, or even remain as a party to the agreement. Because the Arctic Council operates on consensus, without U.S. assent, the customary declaration on Arctic priorities issued after every Arctic Council ministerial meeting will have to omit previously planned wording on Paris-related emissions targets and their significance for the Arctic.

"The absence of that language on Paris could turn out to be a very big deal," said Rafe Pomerance, a former State Department official who now chairs a group called Arctic 21, a science and advocacy network.

Lack of Paris-related climate language would be awkward for the Finnish delegation attending the Fairbanks event. Finland assumes the Arctic Council chairmanship at the ministerial meeting; its chairmanship plan seeks to lead the council in finding ways to carry out the Paris commitments to help the Arctic region cope with climate change. But carrying out any of the Finnish climate goals requires agreement from all eight Arctic nations — including the United States.

"In a consensus-run organization, it's really difficult to take up topics that don't have a consensus," Pomerance said.

Whether climate initiatives succeed or flop there, the Fairbanks event promises to be a high-profile gathering. Secretary of State Rex Tillerson is expected to be there, along with Russian Foreign Minister Sergey Lavrov and the foreign ministers of the other six Arctic nations.

One expected success story of the council is a science-cooperation agreement that has been a key project in the U.S. chairmanship. The agreement is aimed at helping Arctic scientists work across borders, maintain consistency, share information and cut red tape and costs. It is expected to be the third binding agreement produced by the Arctic Council, with enactment coming in the form of a treaty signed by the eight Arctic nations. Previous binding agreements, struck in 2011 and 2013, covered cooperation on search and rescue and on oil-spill response.

The science agreement is a project led jointly by the U.S. and Russian delegations, and is cited as an example of why many diplomats view the Arctic Council as a bright spot in an otherwise dark and tense international scene. The United States and other nations have been at odds with Russia over that country's actions in Ukraine, Syria, policies concerning human rights and now, most recently, mounting evidence that the Russian government interfered with the 2016 U.S. presidential election. But in the Arctic in general — and the Arctic Council in particular — the focus has been on mutual interest and fellowship.

Other U.S. chairmanship "deliverables" or finished products that are expected to emerge in Fairbanks are status reports on black carbon, the soot that darkens snow and ice, hastens melt and harms respiratory health; reports and recommendations on Arctic drinking-water and sanitation improvements; and other reports and projects aimed at assessing and improving environmental, health and economic conditions in the Arctic.

Typically, Arctic Council events and the meetings related to them are policy-dense and technical. But this time, there is an entire weeklong program, called the Week of the Arctic, with a variety of events, including celebrations aimed at the general public. The weeklong effort is thanks to the Alaska Arctic Council Host Committee, a first-of-its-kind organizing group that has worked for the entire U.S. chairmanship to broaden the Arctic message both locally and internationally.

Along with the usual sober closed-door sessions with top-ranking officials, there will be public celebrations that include family-friendly museum exhibits and activities, food and film festivals and a rooftop dance party. While the heart of the ministerial-related activities are in Fairbanks, several events are scheduled in Anchorage and expected to draw hundreds of people. About a thousand participants are expected in Fairbanks.

The planned events, even the most lighthearted of them, are not just about having fun. The schedule was crafted with the idea of spreading Arctic awareness to the general public, said Nils Andreassen, executive director of the Anchorage-based Institute of the North and head of the host committee.

"By doing this a little differently, we would connect with Alaskans where they're at," he said.

There was a lot of need for such efforts. Periodic polling by the Institute of the North and other organization has found that ordinary citizens — even in the far north — know little about the Arctic Council.

Among the Obama administration's stated goals for the 2015 to 2017 chairmanship was to educate Americans about the Arctic and to send word that the United States, because of Alaska, is an Arctic nation.

Was that accomplished? Andreassen gives a mixed verdict.

The climate message has resonated, he said. "In a lot of ways, climate change and Arctic have been seen as synonymous," he said.

But there is still much work to be done before Americans care a lot about the Arctic, he said.

"I don't think it's true that most Americans really understand what's at stake in the Arctic and what challenges Alaskans face as an Arctic state," he said.