NASA baffled by mysterious ice circles in the Arctic 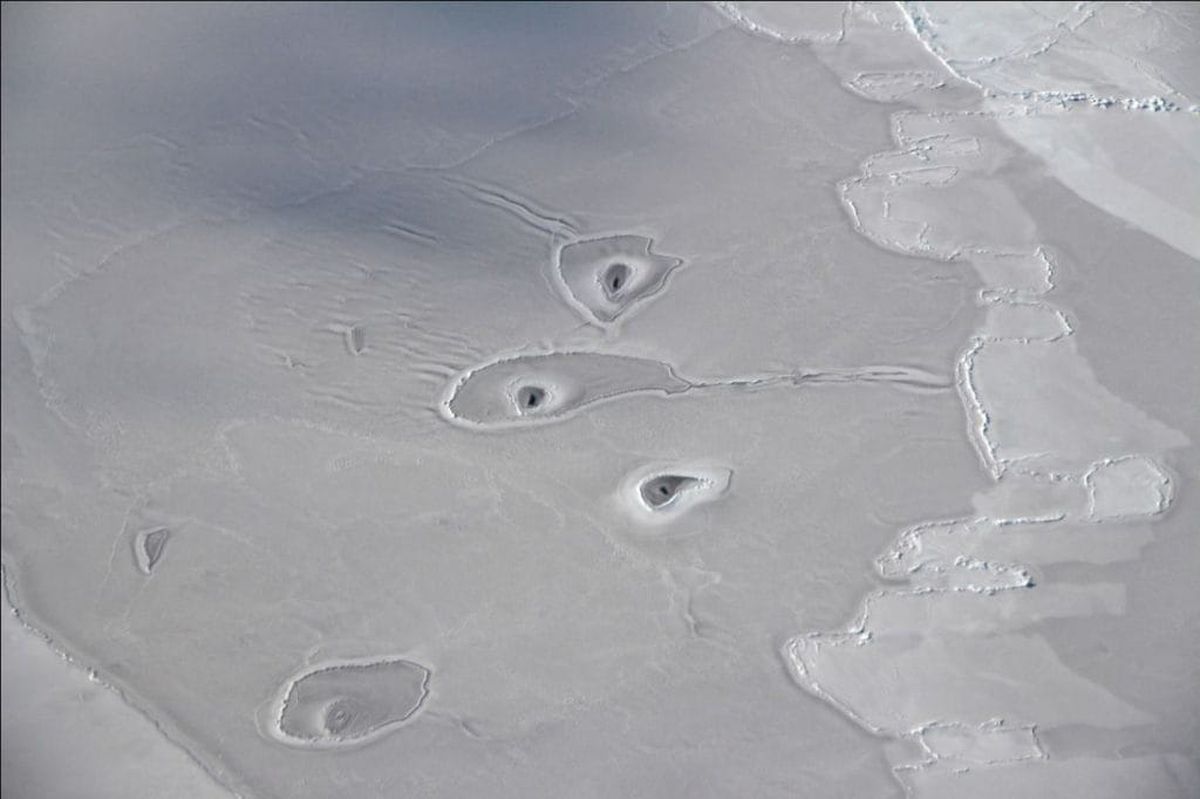 NASA has no idea what is causing some mysterious ice holes in arctic sea ice. (NASA)

NASA has no idea what is causing some mysterious ice holes in arctic sea ice. (NASA)

Add this to the ever-growing list of things you have to worry about:

Somewhere in the Arctic sea ice, where the temperatures are typically below freezing on even the balmiest days, there is a random pattern of holes, and NASA – the literal rocket scientists who took us to the moon and want to take us to Mars – can't figure out what they are.

NASA has spent the past decade flying over the Earth's Arctic and Antarctic regions in an attempt to understand the connections between the world's climate systems, and to look at global warming's impact on some of the coldest places on Earth.

The missions have a name straight out of a James Bond novel: Operation IceBridge.

It's an intensive, six-month survey over two hemispheres that uses "the most sophisticated suite of innovative science instruments ever assembled," including laser altimeters, plane-based lidar and NASA satellites.

"We saw these sorta-circular features only for a few minutes today," IceBridge mission scientist John Sonntag, the man who snapped the photo, wrote from the field. "I don't recall seeing this sort of thing elsewhere."

The sort of things he saw were three amoeba-shaped holes in a vast, unbroken sheet of thin ice.

Not content to keep the bafflement in-house, or perhaps as a fishing expedition, the folks at NASA presented the photo to the space-curious public. They posted a picture of the mysterious ice holes as the April 2018 Puzzler, a monthly contest in which NASA asks viewers to describe a mysterious pictured object.

The post, however, never mentions that NASA's scientists are among the puzzled.

"Your challenge," the contest rules say, "is to use the comments section to tell us what we are looking at and why this place is interesting."

Competitors came up with a host of answers: The holes might be remnants of meteorites, or maybe dried up salt lakes, some said.

No one guessed "entrance to the fortress of solitude" or aliens, or suggested that they were the non-crop versions of crop circles, although one person guessed that America's space agency posted a picture of "something thats come from outer space."

Sonntag snapped the photo April 14 while Operation IceBridge was flying a P-3 research plane over a part of the Beaufort Sea that scientists haven't explored in detail since 2013.

They know that the ice there is, as sea ice geophysicist Don Perovich told NASA, "likely thin, soft and mushy and somewhat pliable."

That means the holes could occur naturally, as warmer bodies of water "make their presence known in this particular area," melting the sea ice, Chris Shuman, a glaciologist at NASA's Goddard Space Flight Center, told NASA.

Or maybe seals have taken advantage of the mushy ice to gnaw air holes that would allow them to surface and take a breath where breaks in the ice don't naturally occur.

Area seals could not be reached for comment, but Walt Meier, a scientist at the National Snow and Ice Data Center, told the Mirror that the encircling features, those lighter areas of ice around the holes, "may be due to waves of water washing out over the snow and ice when the seals surface."

Sonntag and his camera are no strangers to bizarre frozen phenomena. He's a research and development scientist with NASA and is assigned to Operation IceBridge. He's also the one who snapped that photo of the crack on one of the largest ice shelves that ultimately gave the world an iceberg the size of Delaware.

So he's seen a lot of ice, and snapped a lot of photos of rarely seen, icy phenomena.

And all of it was explainable – until now.