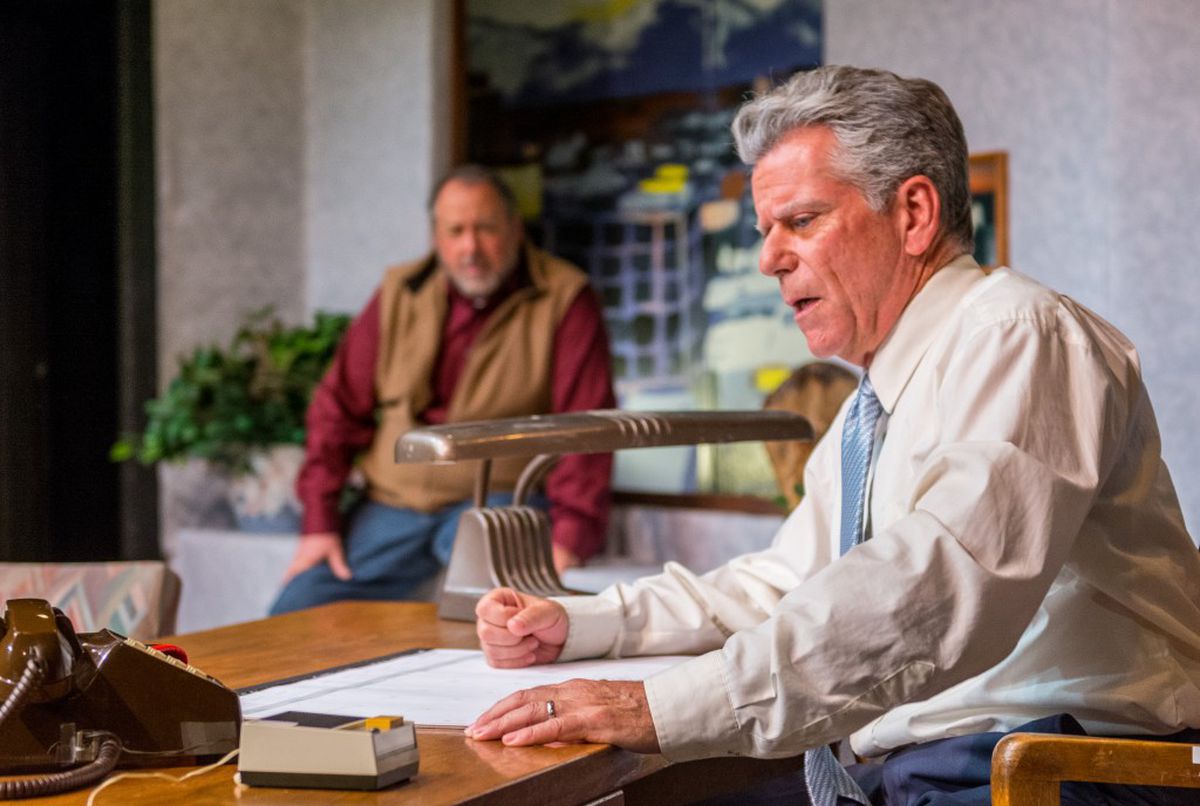 The prolific Dick Reichman has two plays receiving their premieres in Anchorage this month, one being somewhat newer than the other.

The new "new" work is a full-length historical piece titled "The Ticket," directed by the playwright and now playing at Cyrano's. It imagines a conversation that might have taken place had former Alaska Gov. Jay Hammond met with former Gov. Walter Hickel to discuss running as a team in the 1990 election that, in unimagined fact, returned Hickel to the highest office in the state.

The action, such as it is, takes place in Hickel's Anchorage office, where the feisty Golden Gloves champion-turned-businessman-turned-politician works out on a punching bag after acquiring the nomination of the Alaska Independence Party. His third-party candidacy has alarmed the Republican establishment and big-money corporations, with whose representatives he exchanges blustery threats over the telephone.

Hickel has invited — or summoned — Hammond to visit and tries to convince him to join him on the ticket as the pick for lieutenant governor. Laid-back Bush rat Hammond, content in retirement, protests he is politically incompatible with either the party or his longtime political rival in the decades when they were both major figures in the GOP. Hickel argues they're not so different, both motivated by a desire to help Alaska and end world hunger. Never let it be said that Hickel didn't embrace big ideas.

For the next two acts, the men verbally duel over economics, environment, ego, health, mortality and much else, reaching some level of consonance, though Hammond ultimately declines the offer; "The Ticket" is not the kind of historical reimagining that has Lee winning at Gettysburg.

But neither is it particularly edge-of-your-seat stuff in the sense of the best historical plays — "Julius Caesar," for instance, or Reichman's own Exxon Valdez oil spill drama, "The Big One." It contains some surprises as Hammond, and perhaps many in the audience, discover previously unseen — or unacknowledged — admirable qualities in this stage Hickel. And the exchanges are generally lively and informative.

Context, however, the Achilles' heel of historical drama, is not smoothy handled. Persons mentioned in passing are identified with the stiffness of character descriptions in stage directions. For instance, Hickel doesn't say "Ermalee" but "Ermalee, my wife," and "my attorney, Edgar Paul Boyko." Hammond, the only other person in the room, knew these people perfectly well. Descriptors were not needed. It's not the way people talk.

Likewise, Hammond goes into a digression on the failed Delta barley project, a topic he would hardly have had to explain to Hickel. It's dialogue that doesn't advance the emotional progress of the story but turns the actors into lecturers. On the other hand, items such as Hickel's epiphany upon seeing starving people in Sudan have a genuine dramatic effect.

The majority of the audience at a mostly full Thursday-night house last week knew all about Ermalee and Edgar Paul Boyko. They chuckled and responded to lines and implications that might be missed by people who weren't here at the time. Many, perhaps most of us in the seats, knew one or both of the real-life men.

That proximity poses another peril for the playwright since so many Anchorage viewers will be comparing what they saw on stage with what they recall (sometimes imperfectly) from personal experience.

"The Ticket" largely survives this peril, in part because of the talents of two professional actors. Matt K. Miller captures Hickel's energy and optimism. His lines get the biggest laughs, and in some ways, the play is ultimately a tribute to Hickel. William S. Murphy's Hammond is necessarily more subdued, but played with substantial presence. His diction is much superior to that of the real Hammond.

The biggest question with the play, one that cannot be answered in this production, is this: Will an out-of-state audience respond to the show the way personal acquaintances of the characters do?

Across town at Out North, Reichman's one-act "The Phone" is having its debut in conjunction with "The Child Behind the Eyes" by Nava Semel. "The Phone" was written some years ago and tossed in a drawer, the playwright says in the program notes. When asked for a play with a suitable role for an older woman, Reichman pulled it out and decided he liked it a lot better now.

It was a good call.

The phone of the title is almost a third character, the constant companion and only comfort of a woman in a residence for Alzheimer's patients. She makes repeated calls to imagined friends while her estranged daughter wrestles with whether to bring her home. Bernie Blaine and Jane Baird, directed by Robert Pond, are exemplary in the roles of the mother and child.

Though the resolution is a little insouciant, the overall scheme and writing are beautiful. The mother's lines are of necessity disjointed, rambling, repetitive, incomplete. Yet a story is formed leading to a spot-on 30-second analysis of the Orpheus myth that focuses the script into a moment of revelation and takes "The Phone" from poignant entertainment to the realm of real art.

Semel's poetic monologue, gracefully performed by Nava Sarracino, directed by Vivian Melde, also abounds in poignancy. But it lacks the aesthetic meta-theatrical payoff of "The Phone."

First produced almost 30 years ago and staged internationally since then, "The Child Behind the Eyes" is a mother's account of raising her son with Down Syndrome. She recalls his birth, her acceptance of him, the responses of others to the child and her responses to them, the child's relationship with his sister and great-grandmother, and the mother's relationship with her perfectionist husband. The most compelling parts come when Sarracino presents the perspective of the boy himself; I wish there had been more of that.

The audience seemed moved by the play. I couldn't tell whether it was a matter of sympathy or realization of the complete and rather attractive humanity generally found in people with the syndrome and easy to like once you know it's there. I hope it was the latter.

THE TICKET will be presented at 7 p.m. Thursday–Saturday and 3 p.m. Sunday through Oct. 9 at Cyrano's. Tickets are available at centertix.net.

THE PHONE and THE CHILD BEHIND THE EYES will be presented at 7 p.m. Friday and Saturday and 3 p.m. Sunday at Out North. Tickets are available at outnorth.com.