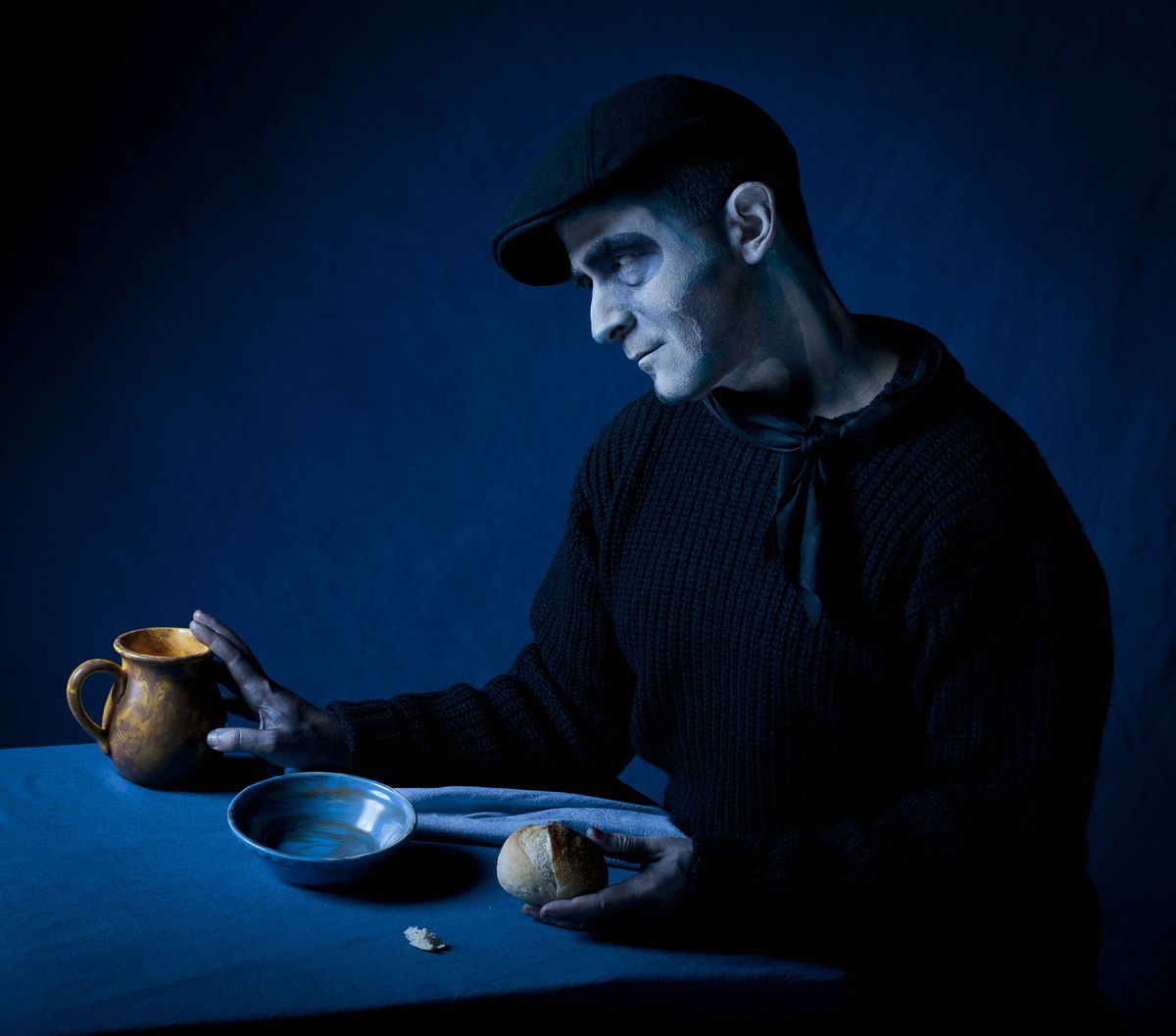 "I was interested in the more poetic, less literal photographs," said Amy Arbus of her picks for this year's "Rarefied Light" juried photography show. "Something other than a beautiful capture. Something that was about something."

Arbus' own photographs usually seem to be about something. Her subject is almost always people and they almost always have an expression, pose and dress that suggest they have a lot more to tell you.

While in Alaska to make the final "Rarefied Light" selections in July, Arbus gave a lecture at the Anchorage Museum titled "Narrative Portraits" and a class for the Alaska Photographic Center titled "Storytelling with Pictures." It's a class she's often presented, she said, "but what I teach is different, it's not my own stuff. In the class we try to make a story using three or more images. What I do on my own is more like single picture narratives."

Her commercial photos have largely been linked to narratives. She's done a lot of work for magazines. "They have a story and they ask me to get pictures for it. But I take the pictures, in some cases, months after the story was written. And by then the situation has inevitably changed."

Photography is sort of in her blood. Her mother, Diane, is one of the most famous American photographers of all time. Her father, Allan, was also an accomplished photographer, though he became best-known as an actor. (Among his roles was the psychiatrist Stanley Freedman in the TV series "MASH.")

"I grew up with photography," Arbus said. "But Dad moved to California when I was 13 and my mom died when I was 17. Suddenly there was no more photography. And I missed it desperately."

Arbus said she tried "every other art form known to man" before deciding to study jazz at Berklee College of Music in Boston, majoring in wind instruments. "Then I broke my front teeth and wasn't playing clarinet for a while. A friend took me to a park and gave me a camera and suddenly I reconnected. It was like, 'Wow! I understand this.' "

More than that, she said, her rekindled love for photography was "a way to be closer to both parents." In particular it was like "a special language that my dad and I had."

In 1980 she got a job with the Village Voice producing a monthly column on street fashion. "They told me, 'Take a picture of anyone who makes you turn your head.' "

The streets of New York supplied ample material from denizens of the pop, punk, goth and urban funk world. At first she tried to snap the subjects candidly, but decided that wasn't working and asked them to pose for her. The result was a series of images that went well beyond the clothing. "Straight portraiture is deceptively simple," she said. The garb seen in the photos makes one look, but the personality in the faces is what comes through. "What I wound up with were portraits, primarily, and fashion statements secondarily."

The Village Voice pictures were published as a collection, "On the Street," in 2006. But before then, in 1999, Arbus published a collection of portraits in which none of the subjects wore anything. "The Inconvenience of Being Born" contains pictures of infants with a variety of expressions — not always cute.

"All of a sudden, all my women friends were giving birth, one after the other," she said. "I didn't want to go broke buying baby shower gifts, but I figured everyone wanted a picture of their baby. I'd never been around infants very much, but it became an obsession. I was struck by how completely unsocialized we are when born."

The intensity of the tykes' emotions as revealed on their faces fascinated her and supplied the captions of the photos in the book — "Concerned," "Tragedy," "The Skeptic," "Angry Girl" and so forth. "I didn't know how to tell them apart, so I used their emotions as titles."

"The Fourth Wall," published in 2008, showed well-known stage actors in costume and makeup in nonstage settings. A review in the New Yorker called it her masterpiece for the way it studied the essential gap between audience and actor, reality and suspension of belief.

It started as a personal project, Arbus said, but ultimately New York Magazine was giving her commissions for the pictures.

"I wanted to take the actor out of the context of the play," she said, "put them in different locations, public places. When you do that, you don't know what year it is or where it was." Unless there's something especially fantastical about the costume, "they look every bit as real as you or I."

Her most recent book, "After Images," revisits famous paintings from a century or more ago, with live models made up, posed and lit to resemble works by Egon Schiele, Paul Cezanne or Pablo Picasso (particularly his Blue Period).

A friend with a black dog had sent her a couple of photos with the observation, "I think me and the dog should be a Courbet," a reference to Gustave Courbet's self-portrait with his own black dog.

At first it was a fairly straightforward process, Arbus recalled. To get the right backgrounds she went to a studio that did backdrop paintings. "They had a painter on the set, he started painting the props. We got more involved with the makeup and costumes. I worked on the lighting, because I wanted a much softer look than I had before. It just evolved."

The pictures in "After Images" are not photoshopped, she said. "All the work is done in camera." But the prints are made slightly larger than life.

The physical print is intrinsically important to any photograph, Arbus said, which is why she was delighted to come to Alaska, not just for the chance to do some bear viewing but to see the actual "Rarefied Light" entries.

"This was a rare opportunity," she said. "I've judged a bunch of shows and sometimes I don't even get to see it mounted. I much prefer this. It's a treat, a totally different experience."

The Alaska Photographic Center initially sent her 700 submissions that she viewed on a computer. From those she chose 80 to see on her trip to Anchorage, eventually whittling the field down to 52 pieces that will be displayed when the show travels around Alaska.

"When you can see the actual photo, you can see the thought process," she said. "Many are printed on material, which is another element. I can evaluate. Do I like the quality? Is the size relevant or arbitrary?"

At this point Arbus is occupied with personal projects. One she calls "Rites and Rituals," showing people at ceremonial events who for the most part, like the "On the Street" subjects, know they're being photographed. That involves them breaking away from the ceremony long enough to face the camera. Even the most exotic participant is thereby made, as Arbus says, "as real as you or I."

The pictures include participants in religious and patriotic events, third world festivities, American pastimes and cultural celebrations. "They're taken at events but not a description of the event," she said. "The people are in the environment of the ritual, but not in the act. For instance, the Irish dancers are all shown not dancing."

The project began in New York, engendered by "the one world look of New York City," she said. But at this point the pictures span the globe. "Now when I travel I try to find whatever's going on that might be interesting," she said. "The collection has never been published and it's never been finished."

A second project, which may or may not ever be published in book form, is called "Goddesses," pictures of models in antique clothes posed with antique furniture. "It's photographing women as they lived a long time ago, in vintage locations," she explained.

Like the "After Images" series, the "Goddesses" pictures are painstakingly prepared and posed. They have a patina of mystery, somewhat like the cover art of a novel and, no coincidence, hint at a tale to be told. A tale from a different time.

"My pictures always look like they were taken before I was born," Arbus said. "It's a quality I enjoy."

Rarefied Light 2016, sponsored by the Alaska Photographic Center, will be exhibited Nov. 4-26 at the International Gallery of Contemporary Art, 427 D St. It will then travel and be shown at the following venues on the following dates: