Perseverance rolls out a modern 'Medea' 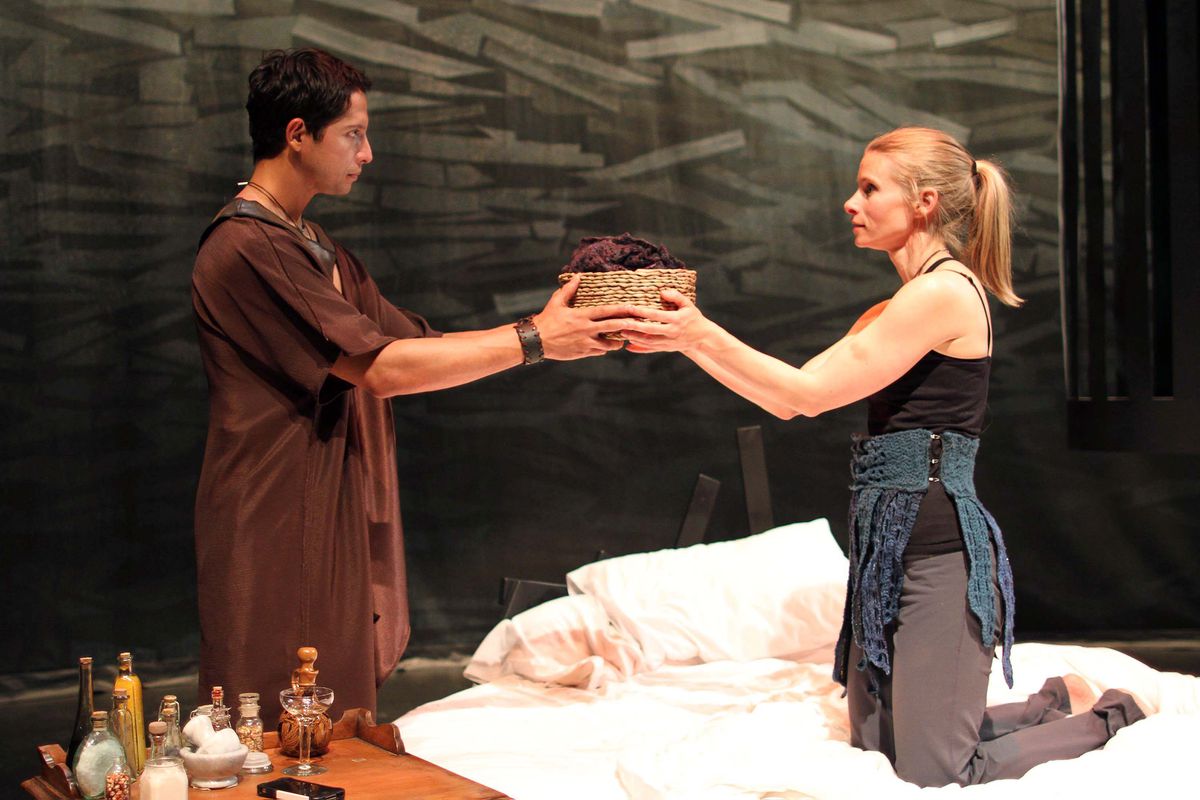 For the last 3,000 years or so, tales of Medea have inspired sympathy and loathing among those listening to the legend or seeing it acted out. The scorned sorceress who kills her children and her husband's new wife has been explored, analyzed, revisited, rewritten and revised for centuries without ever losing its power to grip an audience.

A hot-off-the-presses look at the myth, "Not Medea" by Allison Gregory, is now being staged by Perseverance Theatre in Anchorage, part of a "rolling world premiere" that has seen the play debut in three other cities over the past few months.

In Gregory's version, a harried single mother in the audience is drawn into the play connecting the contemporary character identified simply as "Woman" with the goddess of antiquity. "Woman slips in and out of being Medea and being the modern mother," explained Tom Robenolt, who is directing the production.

She takes over the play, taking the storyline of Medea and using it as a vehicle for her own story," Robenolt said. "And her story is: Why she is not Medea … even though she's had some parallel thoughts" — of betrayal, vengeance, helplessness, etc.

"Not Medea" is basically a one-woman play, Robenolt said, with Woman supplying the vast majority of the script, almost like a 90-minute monologue (one act, no intermission). The part is played by Shelley Virginia, an Anchorage-based thespian whose recent credits include work in New York, Portland, Seattle and in film.

"When you have an actress like Shelley, with great instincts, they're part director," said Robenolt. "She walked into the first rehearsal off-book!" he said, meaning she already had her many lines memorized. "There was no preset blocking. She just got up and started talking. When she did something, we usually went in that direction. I'd say that 90 percent of what she did stuck."

Having a performer show up on day one so well-prepared is a boon for the director, said Art Rotch, Perseverance's artistic director. Less time needs to be spent on setting the groundwork and the creative team can quickly get into polishing the details. "When you have someone like that, the director can have an intelligent conversation from the start," he said.

"Not Medea" has already been presented in Sacramento, California; at the Contemporary American Theater Festival outside Washington, D.C.; and on Perseverance's stage in Juneau. The productions are sponsored by the National New Play Network, which has supported more than 200 productions around the country since its founding in 1998. The Rolling World Premiere Program is considered the group's "flagship initiative," providing funding for three or more theaters that agree to stage the same new play in a 12-month period.

Perseverance is new to the network, Rotch said, although it has previously collaborated with other theaters to present new work in near-simultaneous debuts. The program sees to it that a new play gets more than a single performance and lets the playwright adjust the work after seeing it before a live audience.

"There were some pretty big changes between the shows in Sacramento and the Contemporary American Theater Festival," Robenolt said. "But there were less changes as the show went on. Gregory came up to see our version in Juneau and we were happy to get her ideas on the production."

In the Lower 48 productions, the Woman and Medea characters, played by the same actress, were somewhat conflated. "Ours is different from the previous ones, though," Robenolt said, "in that there's no problem telling which is which."

But that approach puts additional demands on the actress. "It's a challenge for her to flip from Woman to Medea and back," Robenolt said. "It's a script that really calls for a lot of attention to detail."

Another challenge in previous productions has been the role of Jason, the name of Medea's and Woman's ex-husbands. Here it's played by Perseverance veteran Enrique Bravo.

A third character, Chorus (performed by Cate Ross of Juneau), takes on a variety of roles including the collective commentary and narration of classic Greek theater and Medea's children.

Among the playwright's goals is creating an intimate drama within the context of an epic. But while dealing with weighty themes, the play has a lot of humor, Robenolt said.

"Gregory leaves some things open for discussion after people leave the theater," he said. "The audiences are different from night to night, but we hear back and see on Facebook that people really discuss this play afterward."

Not just the Medean subject matter, but how Gregory spins out the relationship between a performer and the person she portrays, Rotch said. "If you've ever wondered about what an actor is thinking about her character, you'll find out here. She tells you."

"NOT MEDEA" will be presented at 7:30 p.m. Wednesday-Saturday and 4 p.m. Sunday through Nov. 20 at Sydney Laurence Theatre. Tickets are available at centertix.net.