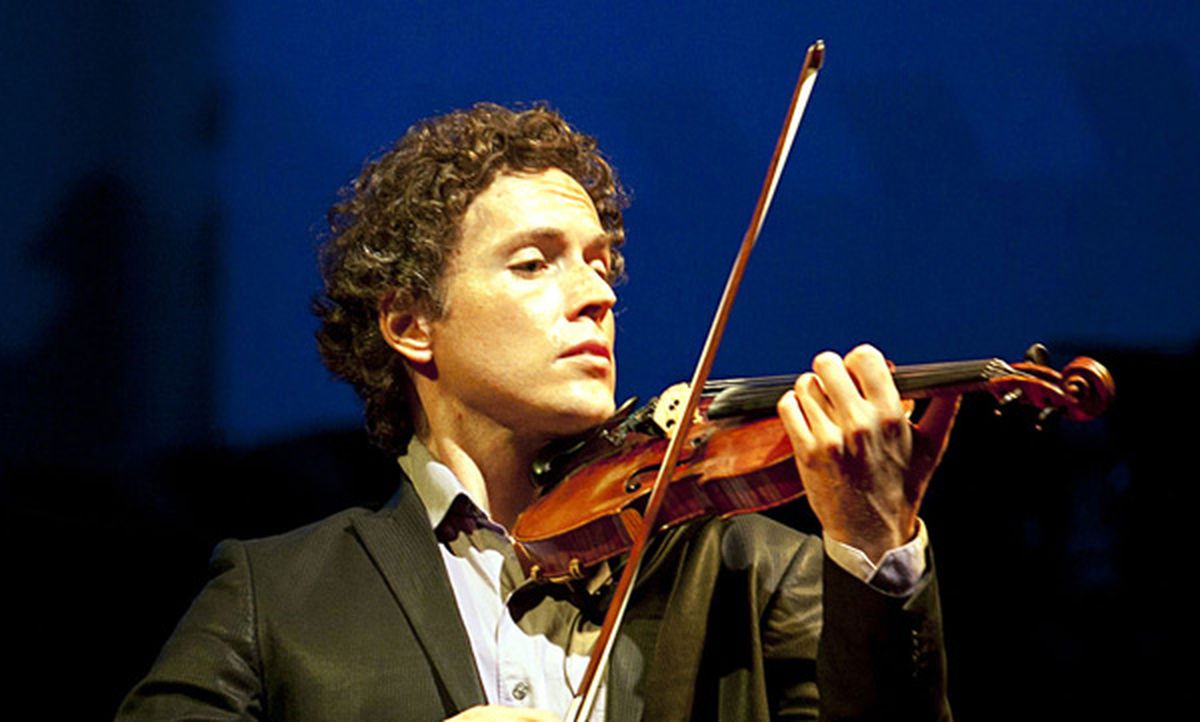 Earlier this month, Tim Fain was playing fiddle in a bar. On Saturday, he'll play Brahms' Violin Concerto with the Anchorage Symphony in Atwood Hall.

You've already heard Fain's work if you watched "Black Swan" or "Twelve Years a Slave." The Santa Monica, California, native gets a lot of movie work, and not just limited to playing notes on a score. His projects range from performing live with independent and experimental films to composing music for a virtual reality YouTube creation ("Resonance," featured at the Sundance Film Festival) to "Portals," a multimedia evening that's been performed in New York, Australia and France.

In fact his performance at the aforementioned bar, the Block in Muskegon, Michigan, was part of a debut screening of a film, "Beirut is a House of Many Rooms." (The Block is really more of an art house with a cash bar provided purely for artistic purposes, to encourage patrons to talk about the art. Yeah.)

In a phone call prior to his arrival in Anchorage, Fain, who is a composer as well as a violinist, said he was now working on a big piece for violin and orchestra based on the first four notes of the "Resonance" piece, originally written for Google.

On the long list of artists associated with Fain we find Wendy Sutter, the cellist who will perform here in the upcoming Winter Classics chamber music series, Feb. 10-12. The two performed Philip Glass' Double Concerto in the Hague.

Fain's concert resume includes the familiar big-name romantic violin works from the 19th century by Beethoven, Tchaikovsky, Dvorak et al., the Brahms widely considered the acme of the genre. But he's also made waves with his performances of works by living composers, including Glass, Kevin Puts and Nico Muhly. He does a lot of premieres.

The upcoming Brahms concerto may be one such premiere, of sorts. Surely the piece has been performed in Alaska before, though I'm not entirely certain that's the case. But it seems likely that it has never been done in Atwood Concert Hall.

The Brahms Concerto is a major example of collaboration between composer and performer, Fain noted. Violinist Joseph Joachim was closely associated with Brahms and in fact wrote the first movement cadenza that Fain will play "with a few modifications" when he performs the piece on Saturday. (Brahms' Violin Concerto is considered the last major repertoire piece for which the composer did not provide his own cadenza but allowed the performer to improvise or create it.)

Fain also noted a second collaboration, that between a violinist and his instrument. He'll be playing a Francesco Gobetti made in 1717.

"It turns 300 years old this year," he said. "And I've been playing it for the last 10 years. When you find an instrument that allows you to be yourself, I feel like I'm communing with another being. There's something very magical about it."

Tickets are available at centertix.net.

Pius Savage, best known in Alaska as the actor who played George Attla in "Spirit of the Wind," stopped by this week to share some of what he's been up to lately. Last month he was in California, talking about motion pictures with Hollywood folks, scripts, projects and financing.

"Everyone wants to film in Alaska," he said. "But the (state-funded) incentives are gone." So some of his back-to-back meetings focused on how to work out MGs, industry lingo for minimum guarantees put up by distributors in anticipation of box office receipts, as a way to finance future movie-making in the state.

Savage, who now lives in Anchorage, said he connected with a range of people, including Chinese entrepreneurs who have become interested in the American movie scene. He showed a recent picture of himself flanked by Galen Walker, producer of the recent "Teenage Mutant Ninja Turtle" films, and producer Randal Kleiser ("Grease," "The Blue Lagoon"), whom Savage met while working on "White Fang" in Haines. (Released in 1991, "White Fang" starred Ethan Hawke, recently seen in "The Magnificent Seven" with another Alaska Native actor, Martin Sensmeier.)

The producers, directors and actors he knows are "down to earth" personalities, he said. "People think they're stuck up, and they're not."

Current projects that he's involved with include films approaching the green light stage where he's listed as executive director and at least three of his own scripts. They include "Dragging Canoe and Wild Rose," about George Washington and his Indian allies and foes, and a horror film, "Shadeling."

"I started writing scripts and decided I like horror," he said.

But show business isn't his only business. He's become involved with providing administrative services contracts for the federal government. It's turned out to be a highly lucrative line of work, but one that he basically had to go back to school to figure out.

"He had to study for six months," said his wife, Mable. "He got up at 4 a.m. every day and was at the computer finding out how these contracts work."

In the contract work, Savage admitted, his wife is his boss, the head of the company. "I work for her. She has me mopping the floors."

But it doesn't have the allure of cinema, he said. "I enjoy motion pictures because I get to be someone else, someone I could never be in real life. And it's fun. You get to meet people."

In the competitive world of movie-making, Savage said he had a certain advantage; he's able to host potential partners on Alaska fishing trips. That advantage, plus persistence and luck have led to the several projects now heading for development.

"I believe in luck," Savage said. "The more I use it, the more I have.

Anchorage fabric artist Amy Meissner has had her piece "Fatigue Threshold" accepted at Quilt National '17, the major national biennial juried quilt show that will be displayed at the Daisy Barn Arts Center in Athens, Ohio, from May 28 to Sept. 4. Following the show, the exhibit will go on a national tour that takes up most of the next two years.

"Fatigue Threshold" is one of 85 works selected from around 450 submissions. Meissner previously received the juror's choice award in the Anchorage Museum's Earth, Fire & Fibre biennial in 2014.

Meissner has been collecting scraps of old cloth from around the world for the past several years. She said she applied the concept of "fatigue" as technically applied to metal, plastic and other materials to the "landscape of women's work … to portray the moment before collapse. The burdens are emotional, physical, sexual, literal. We hoard, we discard, we mend, we make do … some scrap of beauty can always be salvaged."

Alaskans who can't make it to Ohio can see Meissner's solo shows scheduled next year for the Anchorage Museum and the Alaska State Museum in Juneau.

Artists who include subsistence harvest material in their work have not been allowed to collect plants for sale or trade or nonedible animal parts that have been shed (antlers, for example) or are the result of a naturally occurring death. New regulations published by the National Park Service in the Federal Register will change that.

The new language allows the above-named practices for federal subsistence users under most circumstances. Specifically it permits NPS-qualified local rural residents to collect and use nonedible animal parts and plant materials for the creation and subsequent disposition (use, barter or sale) of handicrafts in accordance with the Alaska National Interest Lands Conservation Act.

English physicist and cosmologist Stephen Hawking turned 75 on Jan. 8. In conjunction with that anniversary, Katherine Rawlins, chair of the physics department at the University of Alaska Anchorage, will present a talk about the quest for elusive neutrinos.

Rawlins has investigated cosmic rays using data from the Ice Cube Neutrino Observatory at the South Pole, filtering out the bulk of cosmic rays that neutrinologists refer to as "junk" to find the rare, nearly mass-less particles with no electric charge that roam the galaxy seemingly immune from the pull of magnetic fields. "Cosmic Ray Junk Research from the Ice Cube Observatory" will be presented at 5 p.m. Monday, Jan. 30, at the UAA Campus Bookstore.

Rawlins' talk is one of several upcoming events at the bookstore. At 5 p.m. Friday, Jan. 27, the store's own graphic designer, Dong Nguyen, will talk about his provocative posters, how he goes about creating them, and why it is that people collect and frame them.

At 5 p.m. on Thursday, Feb. 2, Terri Pauls, co-founder of Raven's Roost Cohousing, will join members of the group to discuss the project. And at 5 p.m. on Monday, Feb. 6, Erin Hicks, director of the UAA Planetarium and Visualization Theater, will talk about her research on galaxy evolution and the role played by black holes.

These talks are open to the public and there is free parking for this event in the South Lot, Sports Complex NW Lot, West Campus Central Lot, and Sports Campus West Lot. On Fridays, parking at UAA is free.

The deadline for the Soldotna 2017 photography only contest has been extended to Sept. 30, 2017. Organizers hope this will give potential contestants time to get some choice shots over the summer. The original deadline was Feb. 28.

There's no charge to enter the contest and the first prize will be $500. Entries must be made through the Café link: www.callforentry.org/festivals_unique_info.php?ID=3677.