A critic's observations after 50 years reporting on Alaska arts 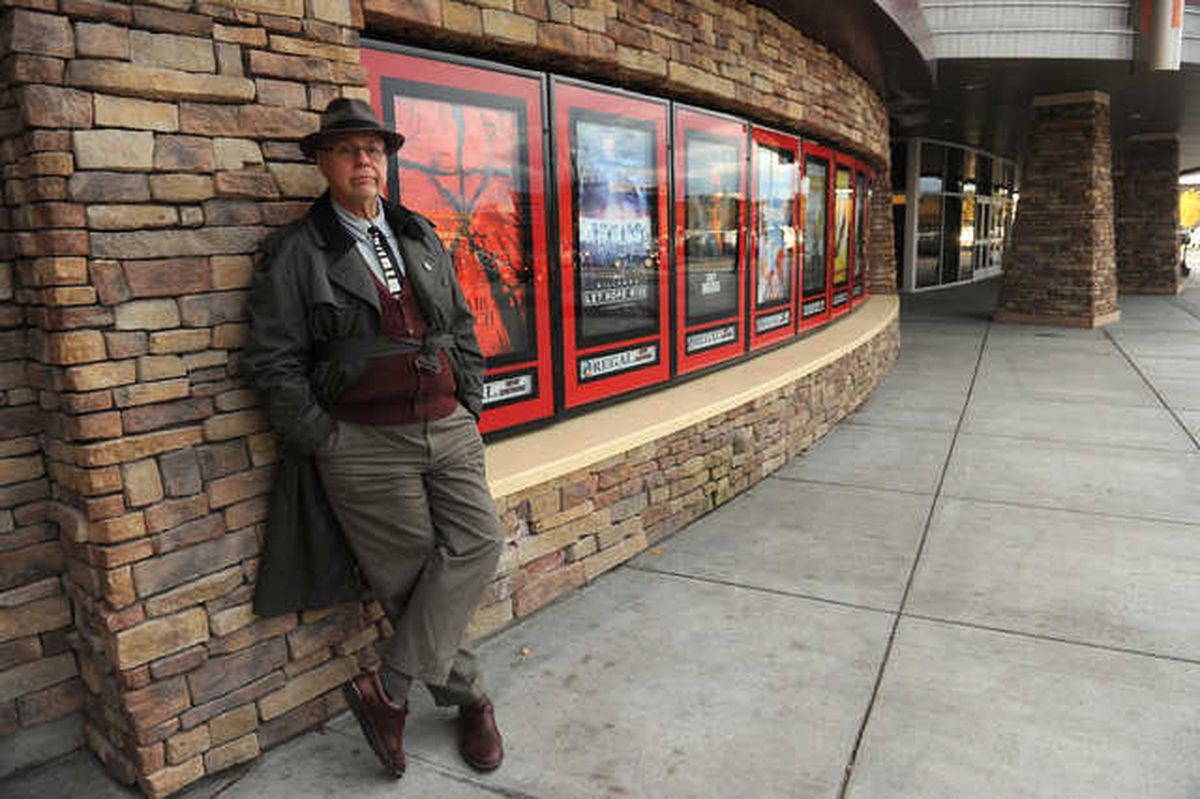 Mike Dunham loiters before the opening of “The Magnificent Seven” at the Regal Cinemas Stadium 16 at the Tikahtnu Commons in Anchorage on Sept. 23. (Bob Hallinen / Alaska Dispatch News)

Mike Dunham loiters before the opening of “The Magnificent Seven” at the Regal Cinemas Stadium 16 at the Tikahtnu Commons in Anchorage on Sept. 23. (Bob Hallinen / Alaska Dispatch News)

Since 1967 I have had a hand in covering the Anchorage creative scene more or less daily in broadcast and print. Half a century of one's life dedicated to the arts seems about all the world can reasonably ask of a person, so I hereby retire -– inflicting on the reader a few unsolicited observations in this, my final Art Beat column for the Alaska Dispatch News.

My family came to Anchorage 50 years ago. I thought I had moved to Paris. For the previous decade I leafed through the pages of Anchorage newspapers flown into the village, often a week or more after publication, and dreamed of the world of culture that awaited me in Alaska's largest city. If only I could get there.

When I did get here, the town more or less ended at Northern Lights Boulevard. A vacant lot occupied the space where the Anchorage Museum now stands. Occasional art shows popped up in shops and at Alaska Methodist University. Community theater was everywhere, even if the venue was sometimes a saloon. The Alaska Music Trails brought serious concert artists to town, even if their virtuosity was sometimes manifested through a banjo.

In Anchorage you could walk into a real bookstore, The Book Cache, with shelves of stuff by great names from Balzac to Pasternak. There were more shelves of books at the beautiful Loussac Library, right downtown! Over on Sixth Avenue, Shimek's had racks of classical music LPs.

I will always consider Anchorage a classy place.

As the city has grown over the years, so has the arts scene.

The Anchorage Symphony Orchestra has made enormous strides since 1967, capable of solid performances of extremely difficult and substantive music. I'm not a fan of the multimedia offerings with dancers or scenic slides thrown in; I like my music straight. And I could do without some of the new, often pop-flavored, music that's more splash than substance. But the audience seems to like these things.

Music director Randall Craig Fleischer has grown immensely as the conductor of the ASO, a job he has held for longer than anyone. He was no rookie when he took the post in 1999, but in recent years his mastery has become more evident, not merely in the coordination of the multiple lines required for a proper reading of a great score but in the way he shapes the music for maximum effect. His performance of Beethoven's "Eroica" Symphony last year was a splendid case in point.

The Anchorage Concert Association, which succeeded the Music Trails series, still offers banjos (or even ukulele) from time to time, but usually in the context of a brilliant folk or jazz ensemble. The presenter has increasingly shied away from marquee classical performers, somewhat to my dismay. But the expansion into top-drawer world music, swing, jazz and roots stars brings in audiences. The big musicals sponsored by the association are a major endeavor that would not have been attempted back in the day.

The wonderful Smithsonian Gallery at the Anchorage Museum gives Alaskans access to resources and treasures from our past that used to require a trip across the country. I hope that the museum's latest construction upgrade will provide a worthy space for its own collection of paintings and artifacts.

I'm less enthusiastic about the "blockbuster" shows that have become a staple of museums around the world, apparently for reasons of money rather than aesthetics. I'm likewise cool to the museum's recent emphasis on international relations, workshops, symposia and such. Though the offerings can be good, much strikes me as both alien and redundant.

When looking over what an artist from the European Union thinks might be profitable for a Polar American, I'm reminded of playwright William Hoffman's quip that Europe hasn't had a new idea since 1911. The museum's highest use, I believe, is supplying a venue for Alaska artists to have their work seen by other Alaskans.

A most gratifying change in the past half-century has been the greater respect given to Alaska Native craftwork. When I was young, it was rare to find an expert piece of carving that included the name of the artist; now it's rare not to have the artist identified. Other indications of what we'll call progress are the extension of traditional techniques into contemporary art and a greater international recognition of art forms unique to Alaska tribes.

I am continually impressed by the dedication and energy of local theater folk. While the venues are tiny compared to the defunct Alaska Repertory Theatre — an enterprise that was probably doomed from the start — and the fare is sometimes amateurish in the worst sense of that word, one still has ample opportunity to catch truly cathartic drama. The achievements of Cyrano's, Perseverance Theatre and the University of Alaska are all the more remarkable in light of the fact that they are presented on shoestring budgets. Much can be done with little more than love of craft and elbow grease. It makes me think that theater will be the last of the fine arts to vanish.

Literature, however, appears to flounder. At least the kind of long-form, thoughtful and transformative writing that got people talking in the last century. Not that there aren't plenty of good writers in the big world, including Alaska. But there don't seem to be sufficient readers.

New forms of verbalization — faster, more prolific, perhaps less effective but potentially more harmful — are displacing complete sentences, thoughts that penetrate beyond veneers and aesthetic expressions that stick with you. Maybe it will be an improvement in the long run.

In the short run, however, I feel like the last mammoth, gazing on the world of inedible willows that has taken over the grasslands on which I used to graze — the grasslands being a metaphor for the arts as I have understood and consumed them — and consigning myself to cerebral starvation while new species arise that get nourishment from munching on the twiggy bark.

But people won't go extinct anytime soon. And they will always need to compare experiences and evaluate differences in perceptions of reality. If the newspeak fails, communication will continue, but it will continue by means other than fair words. Fists, rocks, sharp objects and things that explode will fill the void and become the default methods for making a point.

It has become a cliché to blame the demise of literacy on electronic communications. In 1990 novelist Richard Powers wrote, "Progress has destroyed our ability to tell which facts … are worth recalling."

But the problem isn't so much one of technology, which is only a tool, as of thinking, attitude and passions. I have sometimes referred to the primary intellectual stumbling block of our time (perhaps with more optimism than objectivity) as "the failure of imagination." We have entered a period when, with more stubbornness than necessary, a large number of people believe that if a thought flutters across his or her mind it must be an inarguable fact.

Others have looked at the same trend and made a more stark assessment. As early as the 1960s author Anthony Burgess insisted that society had already entered a new Dark Age.

What is to be done? Specifically, what can art do?

I think that whatever form the various individual genres take, we must not abandon the broader liberal arts. By liberal arts I don't mean painting a picture or playing a guitar, but the verbal arts as opposed to the numerical sciences, disciplines that develop general capacities for thinking and judgment.

These are the ancient skills intended to train one's mind and spirit to examine things calmly, objectively, without prejudice, using some level of reason accompanied by an absence of useless rancor, and sharing the resultant understandings with those similarly disposed.

These skills used to be learned through education, civil conversation, the well-read life and other habits that have lost their former prominence.

At the dawn of the last century, reporter Frank Norris said the great conduits informing public opinion were the pulpit, the press and novels. Those three vessels are wisps of what they were 100 years ago.

Can the new media do the job? Or is its most obvious advantage — speed — inimical to attaining clear, solidly-grounded conclusions? That's an important question.

To ask the important questions presumes a willingness to listen. Any society that genuinely seeks to talk things out will discount at its peril the liberal, lively, visual and literary arts. They may not appear to fit our practical world, which (with good reason) insists on results, quantifiable returns in exchange for known investments and outcomes that can be looked up instantly on Google or Snopes.

Yet in the equally real universe of life, love and comprehension of our existence, the arts give a distinct and much-needed value. It's just that art's value defies quantification or definition.

Value, as Powers notes, is the one thing that cannot be looked up.

Those who need to look me up can write a letter to P.O. Box 220152, Anchorage, AK 99522. Mammoths don't tweet, but we do respond to old-fashioned correspondence.

The launch party for Valley author Julie LeMay's first book of poetry, "The Echo of Ice Letting Go," will take place at 4 p.m. Friday, Feb. 3, at Fireside Books in Palmer. The free event will be followed at 6 p.m. by Fireside's "Dinner with an Author" event at Turkey Red. LeMay will be joined at the place-setting reserved for writers by her daughter, Eowyn Ivey. The little Alaska bookstore has sold more than 1,000 copies of Ivey's latest novel, "To the Bright Edge of the World." Tickets for the dinner, $30 (which includes the food), are available at goodbooksbadcoffee.com.