In Ruby Jones' new piece 'Pearl,' a portal to a self-destructive psyche 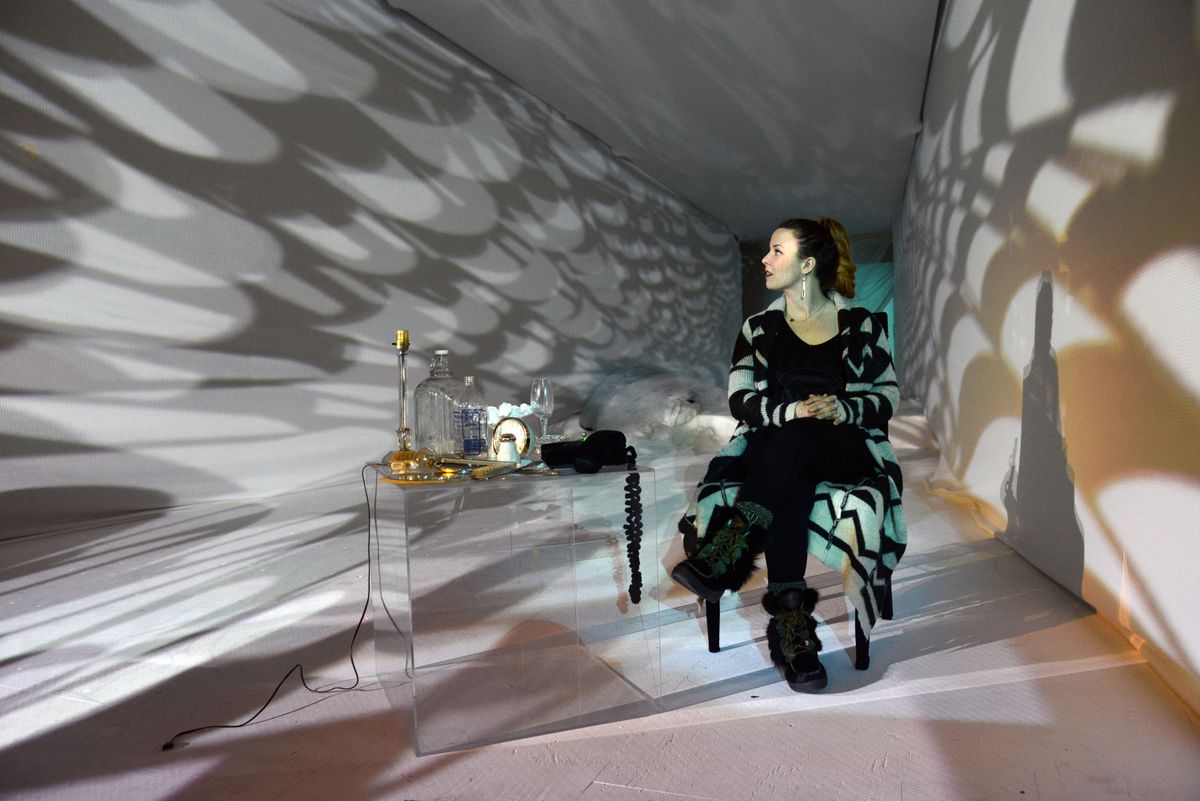 Ruby Jones sits in the projection mapped set of her show Pearl on Monday at the Church of Love in Spenard. (Erik Hill / Alaska Dispatch News)

Ruby Jones sits in the projection mapped set of her show Pearl on Monday at the Church of Love in Spenard. (Erik Hill / Alaska Dispatch News)

Ruby Jones' new performance art piece "Pearl," is a hypnotic trip around the dark corners of a brain blurred by cigarettes, liquor, excessive sleep and isolation.

"The show centers around one female character. It's a portrait of the interior of her mind. In some ways this is a self portrait," Jones, 31, said while testing projections with Anderson at the Church of Love about a week and a half before the premiere. "All of my work is self portraiture in some way — this is about my inner view of myself, but I hope that it is universal."

Jones, who also goes by the last name Kennell, funded the project with a $7,500 Individual Artist Award from the Rasmuson Foundation.

On the surface, Jones, a vivacious, visionary artist who works in multiple art forms, doesn't seem crippled by the vices and distractions entrapping her main character.

Her day job is production manager for the British Broadcasting Corporation show "Life Below Zero." Her Anchorage art world contributions include costume design for Momentum Dance Collective, set design for Pulse Dance Company and marketing for Out North Contemporary Art House, where she met Anderson four years ago.

She has also had installations displayed at venues including the International Gallery of Contemporary Art, for which she created a dark, velvety bedroom with projections.

"Pearl" is Jones' third full-length production, and it's her most ambitiously surreal one yet.

The curious set installation grows in height from 6 1/2 feet at the back to 16 feet in the front.

"This is a 32-foot deep forced perspective box Ruby dreamed up draped in stretch fabric with five projectors lighting it," said Anderson, a technical director in theater and performance art. He recently projection-mapped the ceiling of the Anchorage Museum's Thomas Planetarium to complement a Mivos Quartet performance.

Forced perspective is a technique using optical illusion to distort and manipulate depth and size perception.

The strange dimensions are taken to another level with Anderson's projection mapping. He uses a program called Millumin on his Mac Pro to create the lighting effects, which Jones likens to "CGI for theater."

From his computer, Anderson "maps" moving images on to every surface: walls, floor, ceiling, actor and objects. Light continually swims, swirls and flashes in a variety of changing patterns, from expanding eyes to violently beating drumsticks. The method often results in a strobe-light effect (one that folks with epilepsy or similar conditions should probably avoid).

"We wanted to make the space dreamlike, like it was something you can fall into. It's fooling you with its size and depth and movement," Jones said. "I'm always interested in how things are perceived versus how things actually are."

Art and other habits

A cigarette in an ashtray, poison and liquor bottles, a clock, syringes, a velvet telephone and a makeup mirror.

These "Pearl" props sitting on a clear plexiglass table seemed to be pulsating and floating inside the installation while Jones and Anderson sampled projections.

Clara Underwood, the show's main actress, thinks these objects and the whole tone of the show are particularly relatable to Alaskans.

"There's a tendency to express a lot of the pressures we feel — the absence of light and the cold and the awareness of the homeless population — through unhealthy habits, and some of the imagery represents those pressures," said Underwood. "There is the experience of isolation and feeling time pulling at you."

Jones said she didn't consciously intend for "Pearl" to be a comment about coping with life in Alaska, but it does make sense.

"A lot of people self-destruct in the dark and cold," she said. "It's a very strange place."

She was born in Bird Creek and now lives in Spenard. In between, the University of Alaska Anchorage grad with a BFA in visual art and a minor in dance worked in Los Angeles as a film and television scenic designer.

Jones grew up in a very art-friendly setting.

Her father, Ken Kennell, is a world-travelling pointillist painter and wood carver. Her mother, Suzanne Knudsen, was a heavy equipment operator for the state of Alaska for three decades and a big supporter of the arts. They both still live in the Bird Creek family home built by her father.

Dancing, acting and sports were Jones' main pursuits. "I was in a play every year from when I was 7 to my late 20s," she said. Art awards started coming her way while she was a student at Dimond High School.

When she graduated, she wasn't even sure she wanted to attend college. Once she decided to go, she plunged into every creative class she could, including drawing, printmaking and three-dimensional design.

"Art was the only thing I wanted to do," she said.

Three consecutive thumps resonate through The Church of Love.

It's the sound of a gleeful, grateful Jones jumping for joy in the direction of friend and collaborator Scott Pugh. He popped in to present her with a small, black box that solves a big production problem.

It's a remote control he invented to cue the inflation and deflation of a huge creature he made for the show. He and Jones describe it as a cross between a snow Kraken and a humanoid sea anemone.

They had worried about how they would activate the inflatable without drawing the audience's attention away from the action.

The remote will activate the leaf-blower and hose combo Pugh devised to puff up the balloon beast.

"I don't think I know anyone else who could do such a thing," said a relieved and impressed Jones.

Jones and her colleagues work with what they have and weave it into the overall vision.

For instance, the idea for a creepy, hirsute creature the main character confronts, stemmed from Jones' surplus of wigs.

The woman "finds this sort of black matted hairy disgusting monster in her house, and then realizes it's a part of her and kind of falls in love with it. Then that creature disappears," Jones said. "It's about the parts of you you're not super excited exist. You find them and are scared of them and they upset you. But you find a way to deal with it."