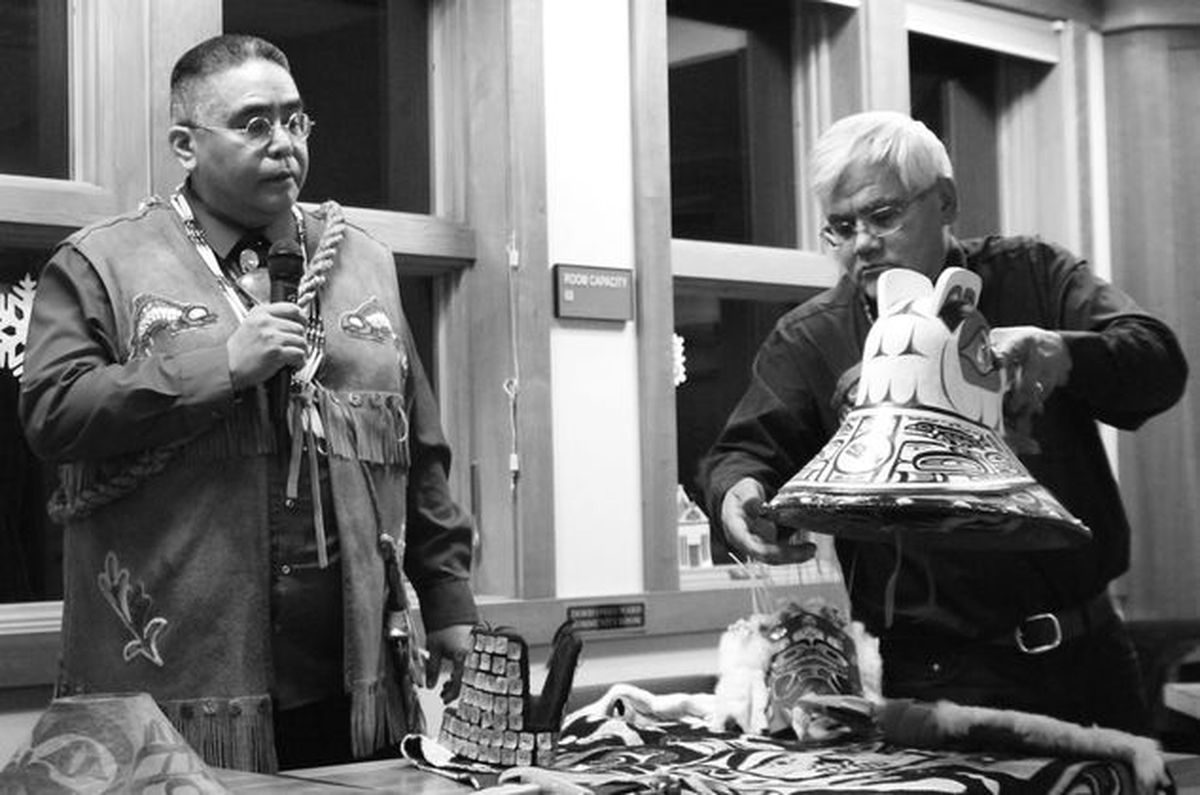 HAINES — Citing the spread of what they called "fake Native art" displayed in Haines, several Chilkoot Alaska Natives will draft a policy on how they expect Native art to be displayed and sold in the borough.

"Haines is perpetuating a lie," master carver Wayne Price said as he read from a prepared statement during a forum at the public library earlier this month. "The volume of artificial art seen by visitors falsely represents our Native traditions, protocol and culture. And actually it's against the law. If protocol was respected and the law was followed, non-indigenous knock-offs of Native art would not be prominently displayed in public."

Price, Ray Dennis, James Hart, Ted Hart and Harriet Brouillette spoke and read statements at the discussion titled "Our Art is Our Voice."

Forum speakers wouldn't name the totems or public art displays they took issue with, or where fake Native art is being sold in Haines. They only said they would discuss specifics at a future forum.

In a separate interview with the Chilkat Valley News, Price said many totems erected around town are not an accurate depiction of the Chilkoot people's stories. He wants Tlingit artists to replace the totems with the ones that tell the "Chilkoot story."

Many non-Natives make formline artworks, also known as Northwest Coast Indian Art. For decades, non-Native people in Haines have been making formline art, including several who were taught by Native artists.

During the forum, Brouillette explained the federal Indian Arts and Crafts Act, which makes it illegal "to offer or display for sale, or sell any art or craft product in a manner that falsely suggests it is Indian-produced, an Indian product, or the product of a particular Indian or Indian Tribe or Indian arts and craft organization. …"

In March 2016, federal prosecutor Jack Schmidt charged four Southeast Alaska business owners, three of whom pleaded guilty, for illegally advertising Alaska Native bone art carvings, which local non-Native carvers made. None of those businesses were from Haines. One was in Skagway, but the business owner was acquitted during trial.

"This has been an ongoing problem throughout Southeast," Schmidt said. "It's been ongoing for decades."

He said there are no current cases.

Outside the law's confines, panelists had different opinions about whether or not non-Native artists should be making Native-style art.

During the forum, non-Native woodcarver and furniture maker Chris Kelly asked where the panelists drew that line.

"I really appreciate the designs and things of that nature, particularly the rattles I think are really cool," Kelly said. "How would you feel if I made those rattles for people by saying I'm just making them for private individuals, if I state I am not Native in any way, shape or form?"

Dennis said if it was clearly marked that a non-Native person created the rattle, it would be fine.

"If you made a rattle like this I'd probably be a little jealous, just a little bit," Dennis quipped, pointing to a rattle he brought. "But I would admire you because of the discipline it takes to do this style. As an artist I would acknowledge and lift you up by recognizing it that way."

Brouillette said the designs on local Tlingit art belong to the clan and that depicting them isn't appropriate.

"If somebody appreciates the art that they see, contact a carver, a master carver, a Native artist," Brouillette said. "Those are the people you should be buying them from. I think that that what's happening now, is that we're seeing more and more fake art, more and more knock-offs being sold. It's disheartening."

"Regardless of the intention of the artist or their work, regardless of their academic pedigree or their deep connections to our people's clans, large public works of Northwest Coast art should be commissioned only from indigenous artists."

Twitchell wrote that what many see as simple raven, eagle, brown bear and shark designs are actually "connections of people and place within a society that has been violently and repeatedly oppressed." He wrote that such knowledge has been commodified from Native communities by non-Native artists.

In later discussions, Sheldon Museum director Helen Alten said nuances need to be addressed. She questioned whether or not an Aleut could make a Tlingit formline totem pole.

"Is that appropriate?" Alten asked. "They're still Alaska Native. We have to clarify what are the guidelines that we can move forward with and is there a way that's acceptable for people who appreciate the aesthetic to use that aesthetic maybe not using tribal motifs or clan motifs but using other motifs but still are using what's considered formline patterning."

The museum heard complaints after it spent $15,000 in Rasmuson grant funds for a totem by Greg Horner, a non-Native artist who learned from Native carvers. The funds are provided museums to purchase work from their community's local, working artists.

In response to Alten, Brouillette reiterated the concept of clan-owned designs, but acknowledged that some artists are cross-trained from different clans or Native groups.

"If a Tsimshian becomes an apprentice to a Tlingit carver, their style will change to mimic the person who's teaching them. In that sense you do see other tribes producing art that may not be from their clan. That's happening now. That's a head-scratcher to me. How do you address that?"

Shori Heaton is half Aleut and half white. The Alaska State Council on the Arts recently purchased a Tlingit frog blanket she designed that will be displayed in Anchorage. In a separate interview, she said she's offended by the notion that she, or even a non-Native artist, be disallowed to create or display Native art.

"It's offensive to me," Heaton said. "How far do we take this? It would be like telling me I could only do a half Aleut basket and the other half has to be a white basket. To me it's a form of prejudice."

Shori Heaton's husband, Jim Heaton, is a non-Native artist who's carved many totem poles displayed in Haines and Klukwan, including those at the American Bald Eagle Foundation, the Sheldon Museum, the Haines Borough Public Library and the Jilkaat Kwaan Heritage Center.

When the museum totem pole was put out to bid, he was the only bidder and several Native artists helped him carve the pole. Heaton also teaches carving and formline design. He's worked on projects and taught in Klukwan since 2001.

"I have taught well over 1,000 credit hours through the University of Alaska, which has given many people the opportunity to learn how to carve."

Tresham Gregg also produces Tlingit-inspired art. Gregg, along with Jim Heaton, Greg Horner and others, trained alongside Native peers at Haines' Alaska Indian Arts when they were young. As a result of that school, many non-Native artists learned to create work using formline and other Tlingit designs, Gregg said.

"People made decisions based on what their reality was at the time," Gregg said. "If that changes for some reason, then in the future it could be just Natives for public display. But I think they're missing the point, in that if it's a movement, a revival, then you revive it with everybody that's interested."

James Hart takes a different view. At the forum Hart detailed the oppression his grandmother experienced and the shame associated with being Tlingit in the recent past that dissuaded Native people from embracing their culture.

Hart said allowing non-Native people to create Tlingit art opens the door to "knock-offs" and waters down a culture that is almost gone. He said a person who takes a job away from a Native person is "part of the problem."

"If you truly respect the culture of the Tlingit people, be our ally," Hart said. "Come work with us as we raise our children. Don't exploit our culture for a monetary value. Don't put up monuments that I can't talk to."

Price said a second forum addressing individual totems and art will be held after the holidays.

This story was republished with permission from the Chilkat Valley News.