‘Book of Mormon’ rides the line between satire and sacrilege 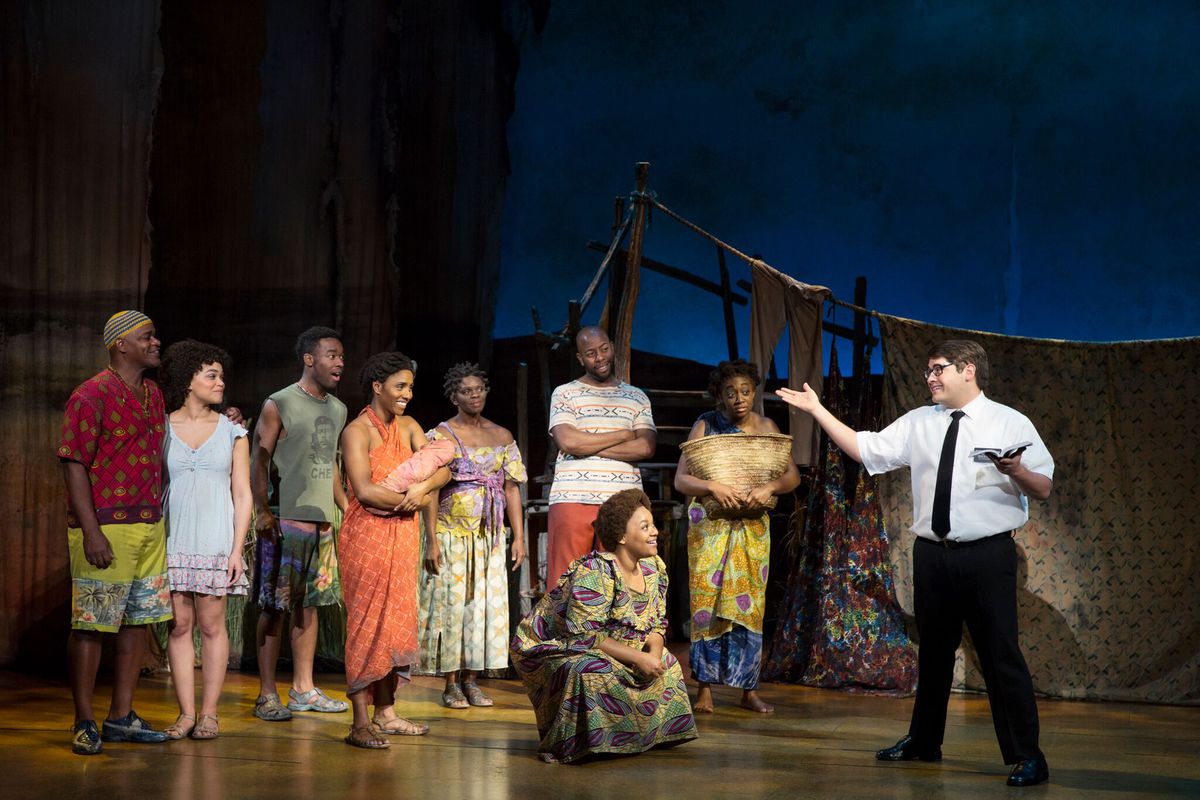 To perform in "The Book of Mormon," an often-startling piece of musical theater, you really have to believe in what you're doing. Otherwise, song-and-dance numbers that focus on topics like poverty, starvation, murder, female circumcision, AIDS, civil war, religious persecution and the threat of eternal damnation can be tough to pull off.

Especially if your grandmother's in the audience.

Kevin Clay, who plays Elder Price in the touring company, recalls his entire family preparing his "very, very devout Catholic" grandma for what she was about to see.

"At the end of the show she comes up to me and says, 'Oh, Kevin, it wasn't that bad,' " recalled Price, who's been with the show for three years.

It can be shocking to see fresh-faced young people dancing and singing (often in unprintable ways) about the aforementioned subjects. But you'd expect no less from collaborators Robert Stone ("Avenue Q") and Matt Stone and Trey Parker ("South Park").

However, theater critics point out that there's no snark, no malice, no nudging and winking. This is social satire done unblinkingly, but lovingly — and with a deep respect for musical theater itself. "Mormon" contains homages to shows like "The King And I," "The Sound of Music" and "The Lion King."

Winner of nine Tony Awards, "Mormon" is the story of two privileged young missionaries and their mission trip to a country wracked by war and famine. One of the first things they do is suggest that things couldn't be all that bad. The song "Hasa Diga Eebowai" gives the locals a chance to explain (also in unprintable ways) that yes, things really are pretty awful.

Someone who offers a simple answer to all problems without actually understanding the extent of those problems could come across as condescending or foolish. Yet these Mormon missionaries are merely naive, embodying what Washington Post reviewer Peter Marks called "that almost unbearable brand of optimism Americans tend to want to impose on the rest of the world.

"(The show) expresses a giddy contempt for that innocence, in one of the most joyously acidic bundles Broadway has unwrapped in years," Marks wrote. "The sin it takes such fond aim at — blind faith — is one that this musical suggests observes no religious bounds."

Elder Price truly believes that he can change the world by converting its inhabitants. Unfortunately, his zeal is based on ego rather than selfless love for humankind. When things don't go according to his plan, Elder Price is bewildered.

"He's so passionate that he's blinded. He has such a strong goal in mind that he doesn't realize how much of a zealot he's become," Clay said.

His mismatched mission partner, Elder Cunningham, isn't at all secure in his faith. In fact, he starts jazzing up traditional Mormon tenets with pop culture elements like "Star Wars" and "The Hobbit" (as well as some astonishingly coarse imagery). How else to get the villagers to listen?

Sound ridiculous? It is. And that's the point, according to New York Times reviewer Ben Brantley:

"A major point of 'The Book of Mormon' is that when looked at from a certain angle, all the forms of mythology and ritual that allow us to walk through the shadows of daily life and death are, on some level, absurd; that's what makes them so valiant and glorious."

At one point in the show, one of the converted says (unprintably!) that clearly some religious imagery is metaphorical, not literal. After all, do details like the precise location of the Garden of Eden (the Mormons say it was in Missouri) really matter in the long run?

Or is the underlying belief in a loving Creator more important than specific details? Shouldn't the faithful focus on love, kindness and caring for everyone in the community, rather than getting hung up on whether the Starship Enterprise really did figure in church history?

The musical regularly leaps the fine line between satire and sacrilege. Stick with it even through any moments that make you uncomfortable, Clay advised: "The show can only make total sense if you see it all the way through. … Everything doesn't really fall unto place until the last scene of the show.

"It's a conversation that will never be over. (If) there's anything that history has shown us, it's that people are never done arguing about or even warring over religion."

Just be sure to warn your grandmother.

A limited number of tickets will be available in a daily lottery that takes place 2½ hours before each performance in the Atwood Concert Hall lobby. The winners, who must be present and provide valid ID, may purchase up to two tickets for $25 each.

THE BOOK OF MORMON continues through Oct. 28 at the Alaska Center for the Performing Arts. The musical contains explicit language and adult situations. Show times are 7:30 p.m. Tuesday through Thursday and Sunday, 2 p.m. Saturday and Sunday, and 8 p.m. Friday and Saturday. Tickets are $72.75 to $109.25, available at CenterTix (263-2787). Note: A ticket lottery takes place daily 2½ hours before each performance in the Atwood Concert Hall lobby; winners will be able to purchase up to two tickets for $25 each.