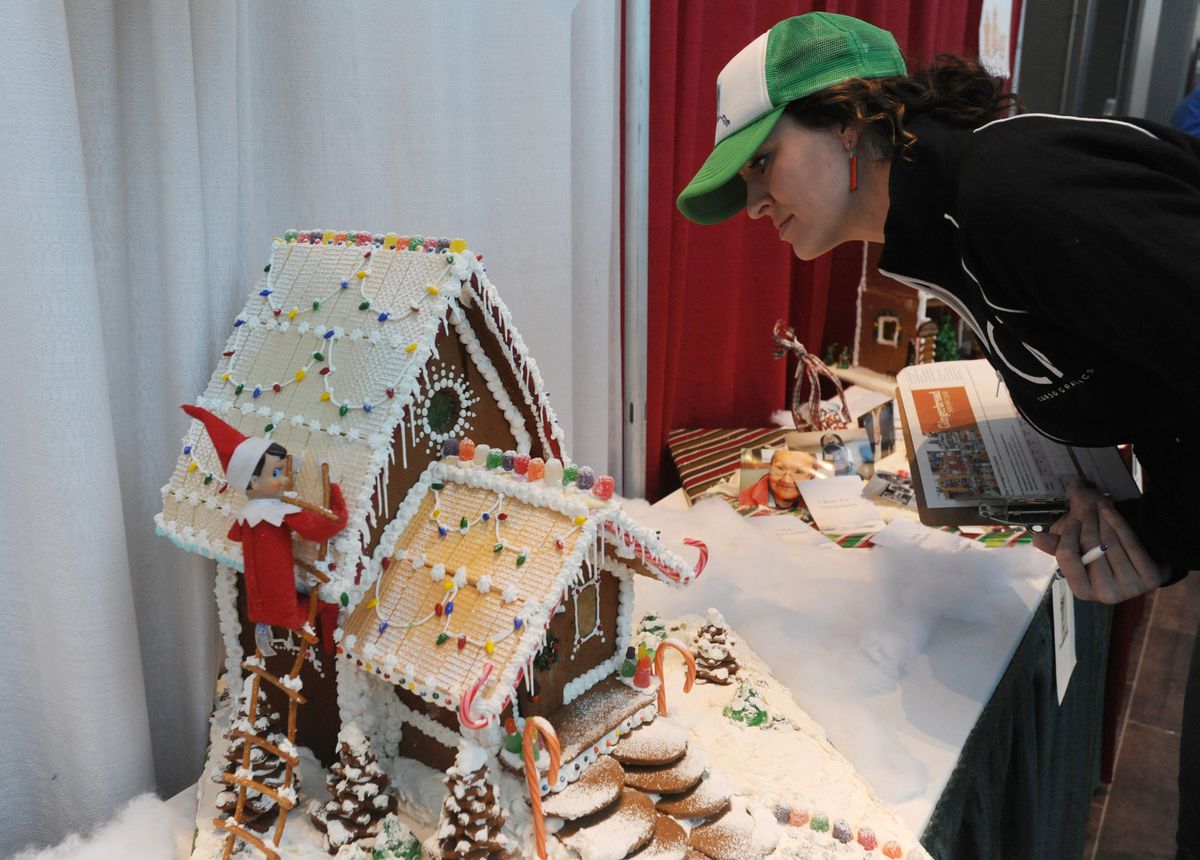 Judge Annie Brace of Corso Graphics looks at the entry "Elf on a Ladder" by Noelle Fabiano that won both first place and the people's choice award at the Gingerbread Showcase, a gingerbread house competition and fundraiser for Habitat for Humanity, during the Christmas Arts & Crafts Emporium in the Dena'ina Center on Sunday, Nov. 24, 2019. (Bill Roth / ADN)

Judge Annie Brace of Corso Graphics looks at the entry "Elf on a Ladder" by Noelle Fabiano that won both first place and the people's choice award at the Gingerbread Showcase, a gingerbread house competition and fundraiser for Habitat for Humanity, during the Christmas Arts & Crafts Emporium in the Dena'ina Center on Sunday, Nov. 24, 2019. (Bill Roth / ADN)

After spending close to two months and about 250 hours crafting a foot-and-a-half tall gingerbread house, Chris Jett thought the project was nearly finished.

Dozer, her 6-year-old chocolate Lab, had a different idea.

When Jett came downstairs Thursday, she noticed the door was cracked open to the room where she’d left the gingerbread house to set.

“He licked the whole section off it! And I looked at the (gingerbread) sign and he’d licked all the wording off the sign, too,” she said.

With only a day before the third-annual Habitat for Humanity Gingerbread Showcase, Jett whipped up a new batch of frosting and started repairing the log-cabin-style gingerbread home she’d made with her grandchildren and friends.

Jett estimates she’s made upward of 50 gingerbread houses in her lifetime. She started the tradition when her kids were little. This house was by far the most elaborate, she said. Jett’s daughter, Gretchen Jett, pointed out the competition last year and Chris spent over a year planning out her masterpiece.

To qualify for the contest, each gingerbread creation must be made on a 2-square-foot base and reach at least 18 inches tall. The theme this year was Elf on the Shelf. Everything on the gingerbread houses, other than the elf, had to be edible.

She started molding tiny pieces of furniture from fondant and candies while visiting a friend early October in Kallispell, Montana. In total, Jett said about nine people helped make the house.

When she got back to Anchorage, Jett started figuring out the perfect dough recipe. Gretchen Jett said they made about 14 batches.

“We made a lot of extras and we froze them,” Jett said. “All of the little pieces had to be baked on their own. And gingerbread, like any cookie, expands when you bake it and some of the pieces would break.”

Inside the finished house, candy boxes with neatly tied miniature ribbons sat underneath a fondant tree. A chocolate peppermint candy hung on the frosting wall just above the fireplace with tiny Christmas trees neatly placed inside its edges, like a picture frame.

Jett previously volunteered with Habitat for Humanity to build homes and said she felt connected to the competition because she sees how important the nonprofit is.

Laura Gutierrez, the fundraising manager for Anchorage’s Habitat For Humanity, said the competition started three years ago. With a “baker’s dozen entries,” Guttierez said this was the biggest year yet. There were also more votes and donations than previous years. More than 1,500 people voted on the gingerbread houses in the adult and youth competitions Saturday and Sunday. Over 200 of the votes came in online.

Donations were still being counted Sunday afternoon, but Guttierez said the organization raised over $3,000.

On Sunday, people pointed toward the tables stretched out with gingerbread houses and stopped to snap photos of them before heading into the Christmas Arts & Crafts Emporium at the Dena’ina Center.

On one end of the table, Noelle Fabiano’s first-place winning “Elf on a Ladder” had the elf carefully seated on a pretzel ladder leading up to a Nilla-wafer rooftop with frosting icicles. A little further down, Laura Newton’s second-place “Santa’s Vacation Homes” looked like four present boxes stacked atop one another. On one layer, a cookie Santa and Mrs. Claus laid in lawn chairs below palm trees constructed from candy.

In the youth division, 11-year-old Caelynn Welch won first place for “Operation: Steal Santa’s Cookies.” Her mother, Monica Welch, said Caelynn loves to cook and the project was a nice way for them to spend time together.

Despite Dozer’s attempt to eat the gingerbread house, Jett made it to the competition on time and “Home Sweet Home” took third place.

For Jett, the real prize was spending so much time with her family and friends.

She said Sunday that she wanted to donate the gingerbread house. She’s dropped off gingerbread houses to a women’s shelter and Bean’s Cafe in previous years and wants to show her grandchildren that Christmas is about giving to others.

“It brings so much joy into my house,” she said. “We win even if we don’t get anything in the end.”