In the opera ‘Frida,' pain, passion and the triumph of art in 13 scenes 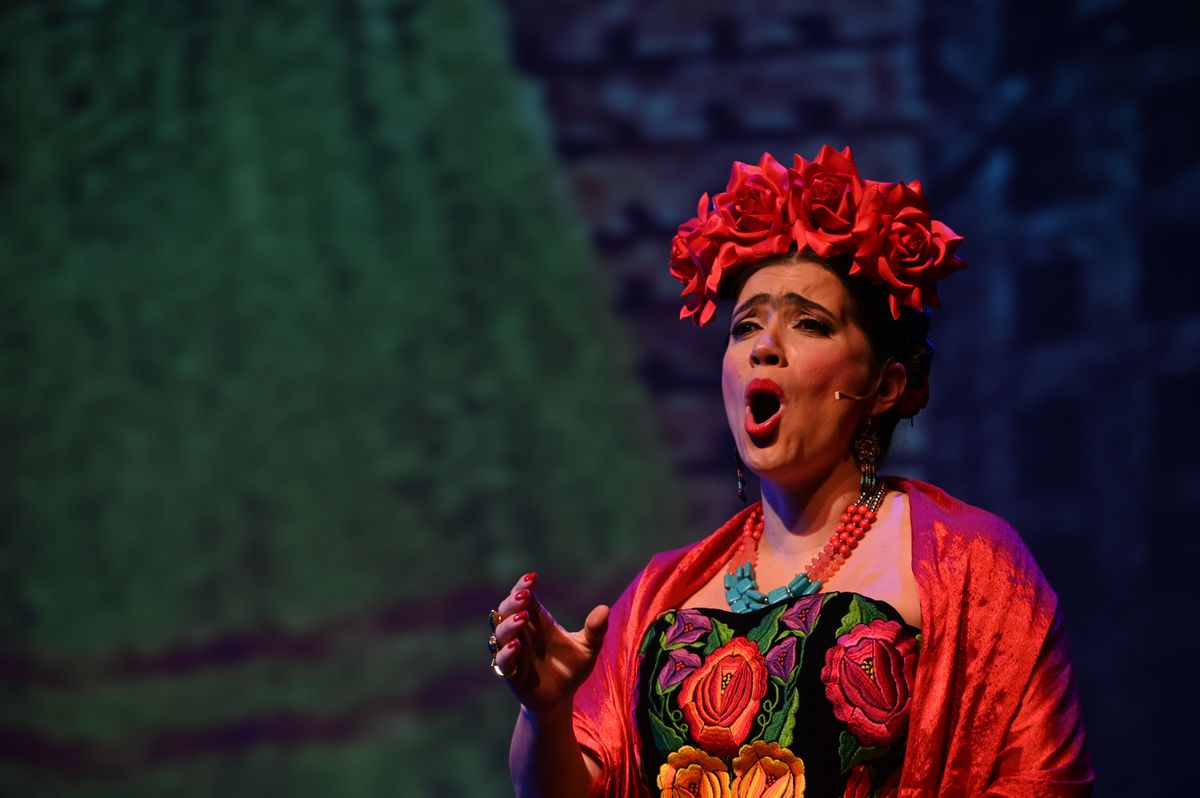 Catalina Cuervo portrays the Mexican artist Frida Kahlo in the Anchorage Opera production of "Frida" in the Sydney Laurence Theatre at the Alaska Center for the Performing Arts. (Bill Roth / ADN)

Catalina Cuervo portrays the Mexican artist Frida Kahlo in the Anchorage Opera production of "Frida" in the Sydney Laurence Theatre at the Alaska Center for the Performing Arts. (Bill Roth / ADN)

For most of her life, Frida Kahlo was generally known as the wife of muralist Diego Rivera. Kahlo once gave a newspaper interview while her husband worked on a series of frescoes for the Detroit Institute of Art. The resulting headline: “Wife of the Master Mural Painter Gleefully Dabbles in Works of Art.”

Relatively few people would recognize Diego Rivera today. Kahlo, however, is ubiquitous. Her face and her art appear on countless T-shirts, posters, nail polish, socks, pins, smartphone cases, lipstick, even prepaid debit cards. There’s a Frida emoji, and a Frida filter on Snapchat. Kahlo is the subject of books, films, three operas (with a fourth in the works) and tons of scholarship.

One of those operas, “Frida,” opens on Valentine’s Day at the Alaska Center for the Performing Arts. Don’t expect a re-creation of the 2002 Oscar-winning film “Frida,” though.

“We’re not trying to do a biopic. It’s an artistic take on Frida and some of the things she experienced,” director Andreas Mitisek said.

Soprano Catalina Cuervo had been “obsessed” with the artist long before composer Robert Xavier Rodriguez asked if she would consider performing his new work, a chamber opera about Kahlo. Her delight at the opportunity translated into a deep empathy with her subject; a review in Opera magazine noted that “her passionate portrayal of the artist brought a feeling of intense, personal identification to Kahlo’s story.”

Cuervo says the popular view tends to be that Rivera was a hound and Kahlo was a victim. But their marriage was an open relationship on both sides, and Rivera became a staunch supporter and tireless promoter of Kahlo’s art.

The Miami-based soprano calls theirs “a really amazing love,” and says the opera paints a much truer portrait of the relationship.

"We hope to be able to tell her story in a different way,” said Cuervo, last seen here in 2016’s “Maria de Buenos Aires.”

“Frida” is made up of 13 scenes that tell the story of the artist’s surreal life, as glimpsed by Kahlo in her final days. The composer has described the piece as part of “the Gershwin, Sondheim, Kurt Weill tradition of dissolving the barriers and extending the common ground between opera and musical theater.”

Anchorage Opera calls the work “a telenovela set to music” — and Frida’s passionate, painful life is indeed the stuff of a Latin American soap opera, full of love, longing, betrayal, reconciliation, and the search for meaning in life and art.

Born in 1907 to a Mexican mother and a German immigrant father, Kahlo nearly died in a bus/streetcar accident at age 18. A handrail impaled her, breaking her spinal column, ribs and pelvis. One of Kahlo’s legs, already weakened by childhood polio, sustained 11 fractures and one of her feet was crushed. Her collarbone was broken and her left shoulder injured so badly it would remain out of joint forever.

The impact of the crash tore off her clothing, leaving her bleeding, nude and impaled – and covered with tiny bits of gold. The collision had also destroyed a package of gold dust carried by an artisan. Such a scene could not have been invented; it had to spring from real life.

Over the next 29 years Kahlo endured 32 surgeries, at-times agonizing therapies and multiple miscarriages. At no time was she ever free from pain. Yet during those years she also painted prodigiously, traveled widely, had affairs with men and women, hobnobbed with the rich and famous, had intellectual conversations with revolutionaries (including Leon Trotsky, one of her lovers), and taught at the National School of Painting, Sculpture and Printmaking.

“Every day she was mocking death, and living life to the fullest. She used her art as a weapon to get past that pain,” Cuervo says.

The result was an enduring body of work that blends folk-art elements with sophisticated painting techniques and a cerebral exploration of race, class, patriarchy, colonialism and personal identity. Novelist and essayist Carlos Fuentes once noted that “Frida Kahlo, as no other artist of our tortured century, translated pain into art.”

That’s another entry point for audiences, according to Cuervo: “Everyone can identify with pain – not only physical but emotional pain.”

The score, performed with mariachi-style orchestration by six musicians, mixes what the composer calls “imaginary folk music” with elements of tango, zarzuela, Mexican folk songs, ragtime, vaudeville, 1930s jazz, and hints of Wagner, Tchaikovsky and others. For example, when Kahlo confronts the notorious anti-Semite Henry Ford, the score features what conductor Stephen Karr calls “exotic modal scales that hint at her Jewish heritage.”

In other scenes, folk tunes like “Horo y Fuego,” “Al Quebrar la Piñata” and “Jesusita” are sampled. Bernardo Bermudez, who plays Diego, was born in Venezuela but his Mexican mother sang these tunes to him.

“I love the way (Rodriguez) uses melodies that are resonating in everyday life in Mexico,” said the tenor, who now lives in San Diego.

More than 60 years after her death, Kahlo continues to intrigue a wide variety of people, including but not limited to feminists, the disabled, non-mainstream artists, indigenous people (her mother was of Spanish and indigenous descent), the LGBTQ community, and socialists and communists.

Also free spirits: Cuervo notes that Kahlo’s goal was “to live my life how I want it," a message that could captivate just about anyone.

“Frida” will be sung in English and some Spanish in addition to spoken dialogue, with supertitles. The libretto is by Hilary Blecher, with lyrics and monologues by Migdalia Cruz. Since the subject matter is mature, it’s recommended for ages 13 and up.