‘Wanna come play in the snow?’: For some families, Fur Rondy snow sculptures are a winter tradition 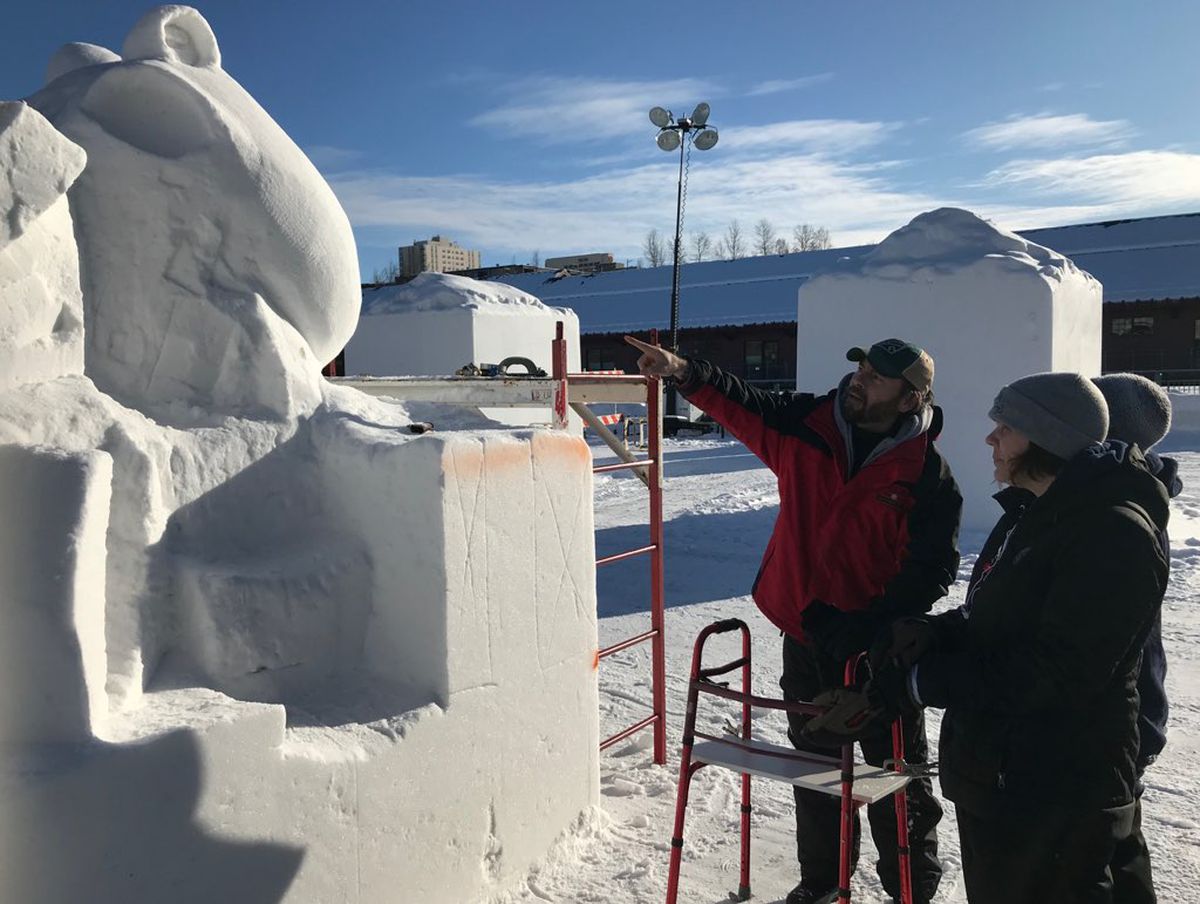 Dannielle Mellor has been planning for this week since November.

Every year, her family spends days chipping away at an 8-foot-tall block of snow in a Ship Creek parking lot until it’s a masterpiece. Last year, they crafted a giant half moon. This year, they’ve started smoothing out the head of an octopus from the chunk of snow.

[See some of this year’s coolest Fur Rondy snow sculptures]

It began when Dannielle’s husband, Jesse Mellor, first sculpted snow during the Fur Rendezvous competition about 10 years ago to impress his young children.

He and several of his friends formed a three-person team and were hooked.

“He came up to me and asked ‘Do you guys wanna come play in the snow?’ and I was like ‘Hell yes I do!’ And we’ve been here every year since,” said one of those friends, Wade Pier.

Today, Pier and Mellor are still carving snow, and the toddlers they set out to impress are now teenagers working next to them.

“Everybody starts to get a little stir crazy right now — it’s so dark out,” Dannielle Mellor said. “And this is a great opportunity to force yourself outside and be able to have fun.”

Pier said he was supposed to retire from snow sculpting three years ago after his team won first place, because symptoms of his multiple sclerosis were worsening. MS is a disease of the central nervous system that can become disabling.

Pier said he competed from a wheelchair last year. This year, he helped direct the teenagers where to start chiseling on the block. Pier is on a team with two other families this year.

On Saturday, he climbed onto the sculpture and helped chip into the block during the first day of the competition.

Straight from the streets of Anchorage

Snow for the Rondy sculptures is collected from all over the city. It was brought to the parking lot and poured into a metal mold last week, Mellor said. Since the snow comes straight from the streets of Anchorage, Mellor said sometimes there are a few surprises inside the blocks.

“One year a guy found a Christmas tree in the dead center of his block. ... You find moose poop, a crumpled up McDonald’s bag, a little liquor bottle,” she said. “The first few years we did it, the snow that they collected was maybe not from where they collect it now because there was a lot of stuff you’d find in it. But the last few years it’s been few and far between that you find anything inside a block.”

The weather plays a huge role in the competition, also. Mellor said this year’s snow is exceptional, although she worries about the sunlight potentially melting some of the sculptures during the daytime. The competition began a week later than usual this year, but Mellor said the recent snowfall has been reassuring.

“We’re finished right when Rondy starts,” she said. “So these things are meant to stay up for another couple of weeks and that realistically might not happen. But the big moment that everybody comes down that first weekend and all the people that really, truly love snow sculpting will drive by every night to look — those people will see them when they’re completed. And then if it falls apart, it falls apart.”