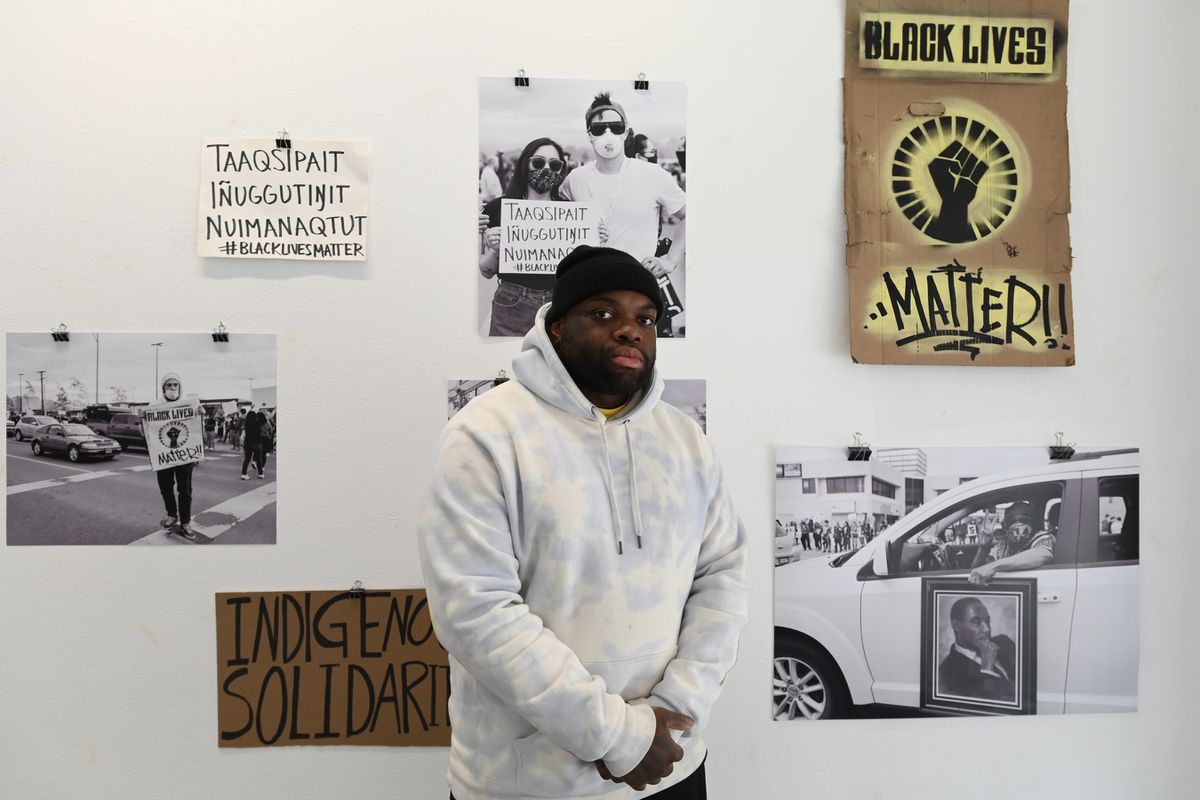 Jovell Rennie, co-owner and co-founder of Akela Space, a gallery and community studio on Sixth Avenue, with an exhibit by local photographers from both rallies against police brutality in Anchorage on May 30. (Bill Roth / ADN)

Jovell Rennie, co-owner and co-founder of Akela Space, a gallery and community studio on Sixth Avenue, with an exhibit by local photographers from both rallies against police brutality in Anchorage on May 30. (Bill Roth / ADN)

Twenty-one large photographs line the clean white walls of Akela Space on Sixth Avenue. Each image captures a scene of protesters from the May 30 Black Lives Matter rallies in Midtown and downtown Anchorage.

Akela Space, in collaboration with Showdown Productions, opened the “I Can’t Breathe" First Friday exhibit and community fundraiser on June 5 to raise awareness for the Black Lives Matter movement. The exhibit also raised money for 15 local and national organizations such as Black Lives Matter and Identity Alaska that support minority communities.

The online fundraiser began May 31, the day after Anchorage’s first rally. Jovell Rennie, one of the founders and co-owners of Akela Space, said donations totaled $23,000 when it ended on June 7.

“I thought, maybe if we’re lucky, we’ll raise 200 bucks or something like that,” he said.

In addition to Rennie, local photographers Ryan Chernikoff, O’Hara Shipe and Kerry Tasker are featured in the show, along with 16 handmade signs borrowed from protesters. The exhibit runs until June 17.

The COVID-19 pandemic had shuttered the gallery since March, and Rennie said he wasn’t sure if they would be opening in June or if Akela Space could even afford to do a show.

It was community support, and the desire to provide an in-person art exhibit for the city, that helped the show come together in only six days.

[Photos: An emotional day of protests on Anchorage streets]

Hellen Fleming of Showdown Productions approached Rennie and offered to pay for printing photos and flyers to get the event off the ground.

“Showdown came through swinging, basically saying, ‘Any resources you need, we can cover them. ... If you want to do it, just say so and we’ll make it happen,’ ” Rennie said.

Protests erupted nationwide in the wake of George Floyd’s death, a 46-year-old black man killed by a Minnesota police officer. Alaska was no exception.

The state’s first rally was held May 30 in Anchorage and subsequent protests took place as far north as Kotzebue and Utqiaġvik.

When the “I Can’t Breathe” exhibit opened on the same day as Anchorage’s second protest, the line of people waiting to get into the gallery on Sixth Avenue was up to 60 deep, Rennie said.

At Rennie’s request, organizers of the June 5 downtown protest routed their march past the Akela Space so attendees could see it go by.

“It was powerful. People waiting in line could see the protesters marching down Sixth Avenue coming from what seemed like all over the street,” Rennie said.

Gallery capacity is limited to 10 people at a time, and viewers only have 8 minutes and 46 seconds to see the show — the length of time a Minnesota police officer is reported to have kneeled on George Floyd’s neck before his death.

Labored breathing plays over speakers throughout the gallery as attendees look at the photographs and signs and watched parts of the documentary “13th,” which examines America’s mass incarceration of black citizens.

The show was inspired by Rennie’s frustration with police brutality and its effects on black Americans, he said.

"(It) came from a place of anger. I was pretty fed up with what I’d seen going on from Ahmaud Arbery, George Floyd, Breonna Taylor, and it all just kind of reached a boiling point,” he said.

And that anger led him to pick up his camera and photograph his own community.

“When I saw that there was a protest taking place in Anchorage, I wanted to participate. I knew that I could go, and I could document," he said. "When I don’t know what to do, that is what I do. I always take photos.”

Rennie attended the Midtown rally on May 30, and as he began taking photos, he saw the unity among the protesters. His said his goal was to capture their solidarity because, as his mentor Stephen Vanasco once told him, it’s just as important to document the grace as it is to document the unrest.

The following day, Rennie posted on the gallery’s Instagram account inviting people to come take photos at Akela Space and have conversations about events going on nationwide.

Along with the post, he put out a link on the gallery’s social media pages to collect donations for organizations supporting minority groups. Rennie was surprised by the initial response of almost $1,000 in the first 24 hours and $5,000 by the third day.

Rennie wants the show to resonate with viewers, start conversations and potentially lead to action.

“If they’re confronted with those images, for even a moment, it makes them think about what’s going on,” he said.

Many people had emotional responses, even choking up while walking through, he said.

"Art should make you feel something. It should give you an extreme response,” Rennie said. “If it leaves you indifferent or in the middle, that’s not it.”

The “I Can’t Breathe" exhibit is open for public viewing Monday through Thursday by appointment or Friday through Sunday 11 a.m. to 6 p.m. until June 17 at Akela Space. For more information, visit akelaspace.com or call the gallery at 907-917-8055‬.