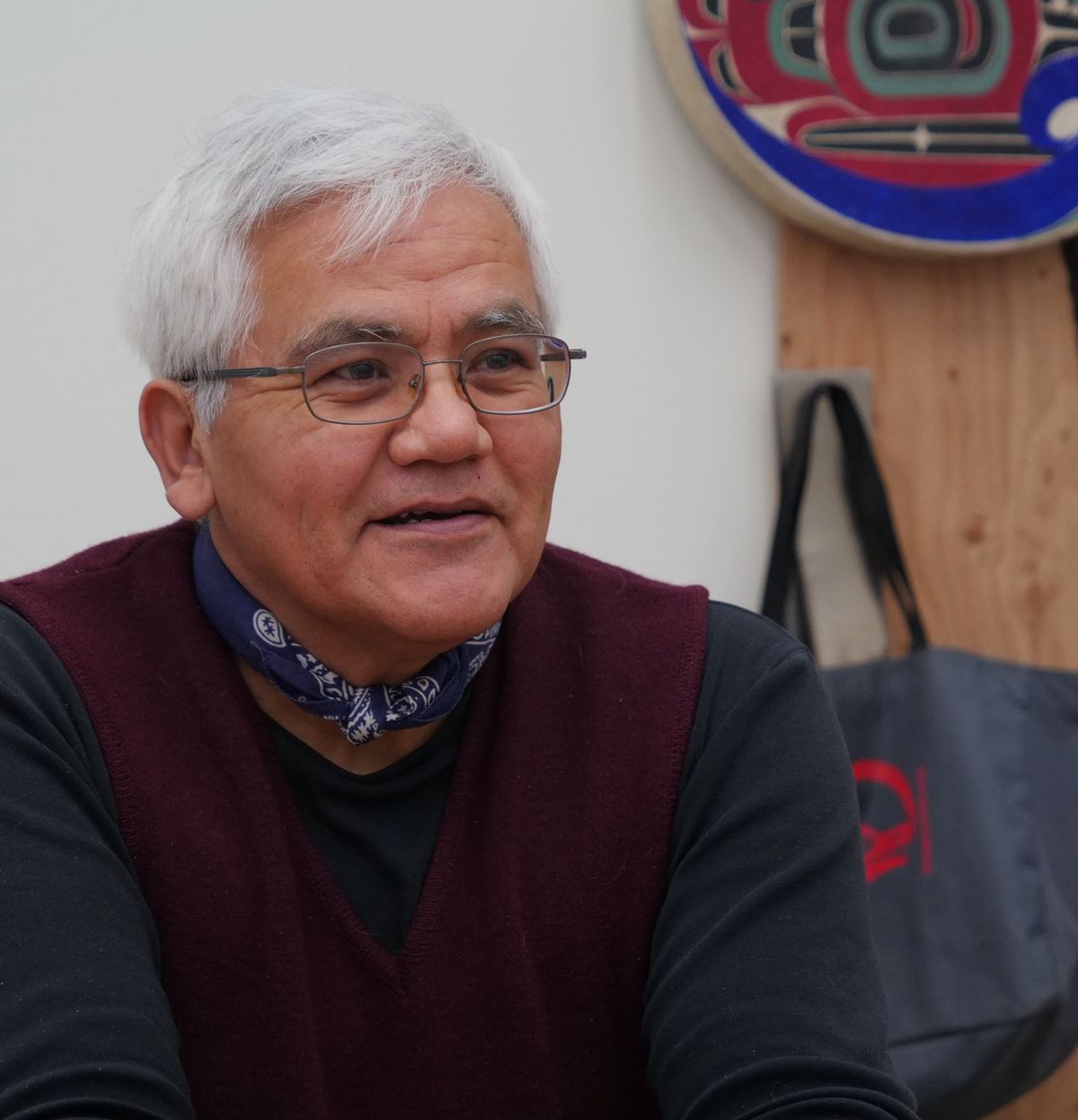 The Rasmuson Foundation announced the 36 artists that will receive grant awards in 2020. In a first for the foundation, the awards were opened to collaborative groups as well as individual artists.

Ten artists received fellowships of $18,000 and 25 received project awards of $7,500 from a pool of 289 applicants, the foundation announced Wednesday. The most prestigious honor, the distinguished artist award, was given to Tlingit master carver Wayne Price.

Four group projects were awarded. Enzina Marrari, one of the co-managers of the awards, said the foundation saw a need for expanding the representation of Alaska artists beyond individual creators.

“We really wanted to honor and respect the collaborative nature of art-making and art practice and recognize groups as eligible applicants this year,” she said.

The virus has interrupted artists’ shows and performances, causing most recent events to be canceled. That’s created an even greater need for the foundation to continue supporting them, Marrari said.

“There was no question in the foundation on whether we would maintain the individual artist awards this year,” she said “We know that artists continue to need support in our community and the voice of artists is essential in telling the story of Alaska.”

In past years, a national panel of artists would come to Alaska to review the applications, but COVID-19 travel restrictions resulted in a completely virtual review panel, Marrari said.

Some artists have had to reimagine or postpone portions of their projects because of safety concerns and travel restrictions Marrari said.

Here’s the complete list of awardees (project descriptions have been edited for length; see the full descriptions at rasmuson.org).

Tlingit master carver Wayne Price was named the foundation’s distinguished artist for 2020, the foundation announced in March. Wayne received $40,000 for his work restoring and duplicating historic totem poles, as well as reviving the techniques of carving traditional oceangoing canoes, the announcement said.

Born in Juneau and raised in Haines, Price started carving as a teenager at Alaska Indian Arts. Throughout his career, Wayne has carved 38 totem poles and 12 oceangoing canoes, his profile page on the foundation’s website says.

Not only is he famous for his carving skills, but also for his use of art to promote healing and recovery.

“I know two things,” Wayne says on his profile page. “I know about wood. And I know about recovery.”

Wayne is the 17th artist to receive the award meant to recognize artists possessing and extensive body of work and accomplishments.

Absolute Zero is a group project focusing on creating sculptures in Western Alaska that will use sound as a metaphor for breaking the silence centered around sexual assault. Artists will document the process to create a film that amplifies the call for “absolute zero” sexual violence. The team includes documentary filmmaker Joshua Albeza Branstetter, sculptor and project director Sarah Davies, ceramic engineer Ed Mighell and project manager Rachelle Branstetter.

James Dommek Jr. will create “The Fantastic Alaskan” podcast to reinterpret his great-grandfather’s Iñupiaq stories and make them accessible to youth through audio and animation.

Multidisciplinary poet Christy NaMee Eriksen will explore themes of loss and identity in a new body of work about her adolescent years as a Korean adoptee.

Athabascan artist Emma Hildebrand will use the traditional craftsmanship she learned from her mother and Alaska Native elders to create pieces from hides, quills and beads.

Anchorage musician Emma Hill is creating a work of music, poetry and images from her experiences in 30 national parks this past winter. She wants to immerse audiences in the power of natural spaces and underscore their importance in our culture.

Linda Infante Lyons will create a new body of work featuring paintings that celebrate the strength and spiritual power of contemporary rural Alaska Native youth by incorporating sacred elements from Sugpiaq, or Alutiiq, and Russian traditions.

Cynthia Morelli will use woodfired clay sculptural works to explore femininity with one of Alaska’s only two anagama kilns. She plans to advance her mastery of firing techniques through study with female mentors and enhance her online presence.

Kristy Summers uses cast and fabricated metal, wood, resin, concrete and found objects to create mixed media sculptures. She will construct a home studio that will allow her to produce and share new work influenced by Alaska.

Jennifer Younger uses copper, silver and spruce root to make jewelry inspired by Tlingit formline design. She will create a solo exhibit and design new works that honor her heritage beyond jewelry.

Juneau musician Annie Bartholomew will record an album of original songs inspired by women of the Klondike Gold Rush on a new custom instrument exploring themes of sexual assault, survival and resilience.

Singer songwriter Nick Carpenter, from the band Medium Build, plans to tour the Lower 48 to show that Alaska music isn’t just for Alaska.

Corinna Cook is working on a book-length collection of lyric essays built around research into the art, changing ecology and often-painful history of Southeast Alaska and the Canadian Yukon.

Bluegrass musician Rachel DeTemple will record an album of original songs about claiming voice, featuring herself on fiddle and vocals, singing about the experiences of women — confronting the “grass ceiling” of limited opportunities for women in bluegrass.

Composer Michael Dickerson, who explores relationships between people and place through sound, plans to hold concerts of original music in Alaska’s abandoned military structures, employing their unique acoustics and documenting the work on film.

Mary Hayden will purchase an industrial sewing machine and invest in training to expand her skills and the capacity and range of her work with hand-stitched leather goods that are functional as well as artistic.

Huitzilin, which means hummingbird in the Nahuatl language, is a duo of Bryan Allen Fierro and Don Rearden who will write an original screenplay for a biopic based on Saúl Armendáriz. It will explore how Armendáriz, who is openly gay and Indigenous, has challenged prescribed roles in lucha libre, a hypermasculine Mexican wrestling tradition.

Musician Nelson Kempf will produce an album of original songs to better understand himself within a wider context of Alaska cultural history while reaching toward decolonization and environmental stewardship.

Illustrator Natasha Zahn Pristas and writer Sara Loewen of the Kodiak Collective will create a mobile installation reflecting the history and circular nature of life in the Kodiak Archipelago.

Ethan Lauesen will create a solo show promoting healing around the themes of belonging and rejection in Indigenous culture through his prints that explore Alaska Native and LGBTQ+ identity using Tlingit formline images and figurative distortions.

Sarah Manriquez will expand on her documentary photo project challenging stereotypes around homelessness in Alaska by working in collaboration with people experiencing homelessness.

Carver Aaron Phillips will purchase materials and equipment and travel to Juneau to study with mentors and advance his artistry of telling stories about Alaska Native people.

Filmmaker Deborah Schildt will create “Losing Ground,” an educational podcast and Instagram series about global impacts of Alaska’s melting permafrost, featuring stories from Alaskans on the front lines of change.

The printmakers’ collective Tent City Press will invest in new equipment, software and supplies to enhance artistic quality and expand self-publishing capacity. Members are eager to bring studio access to a wider community of creatives.

Tlingit, Athabascan and Yup’ik multimedia artist Crystal Worl will collaborate with other artists and Lukaax.adi clan members on a mural of Elizabeth Peratrovich in downtown Juneau.

Carver TJ Sgwaayaans Young will create a replica of a rare Haida bow housed at the Anchorage Museum. He’ll work with an unusual hardwood — yew — and to revive the knowledge needed to carve traditional Haida weaponry.