‘It’s not somewhere else. It’s everywhere’: Anchorage business owner turns needles littering his property into art piece about drug use 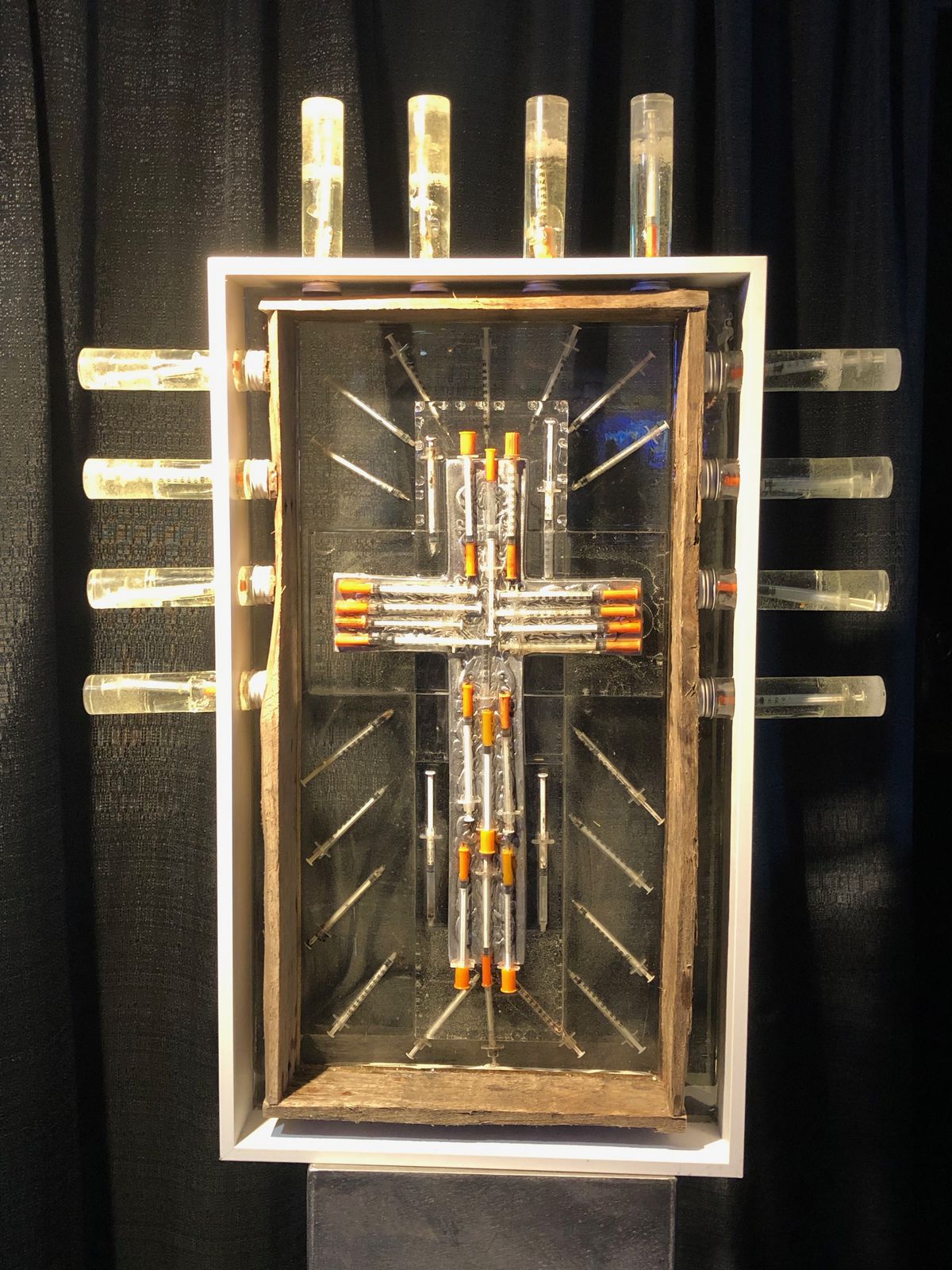 The "Karluk Cruci-fix" June 4, 2020 at The Raven on Fourth Avenue. (Photo courtesy of Jenada Johnson)

The "Karluk Cruci-fix" June 4, 2020 at The Raven on Fourth Avenue. (Photo courtesy of Jenada Johnson)

Darl Schaaff often picks up broken bottles and trash thrown over his property’s fence on the corner of Karluk Street and East Third Avenue. He cleans the grounds of his business multiple times a year, but Schaaff said this spring was the worst he’s ever seen it.

“When I walked up this year, in the spring after the snow melted, I literally cried,” he said. “I’ve never seen it so horrible.”

Schaaff found 54 used syringes amid the broken vodka bottles, discarded clothes and other debris. Looking at the needles piled in the collection container, he saw an opportunity to make a statement about what has been happening in the neighborhood.

“Literally in the middle of the night ... I woke up with this vision in my head to combine two things: One that is both comforting and compelling, which is the crucifix, the cross, and the other is to mix it with things that are so offensive and abrasive like used syringes,” Schaaff said, who created the piece “Karluk Cruci-fix” in May with the help of fellow artist Jenada Johnson.

Schaaff’s event planning business, Art Services North, is located across the street from Bean’s Café and kitty-corner from Brother Francis — Anchorage’s two largest homeless shelters. The stretch of Third Avenue has struggled with illegal homeless camps and open substance use for years.

Schaaff wants the sculpture to draw attention to the issue of open drug use that has become common near his block of Karluk Street.

In the ‘Karluk Cruci-fix,” used syringes, some still with blood visible in them, are encased in resin and surrounded by a wooden shadow box. The needles are arranged on top of an embellished silver cross and radiate out toward the edge of the clean, white frame.

Schaaff said he realized the issue is not limited to Karluk Street. So he added 12 syringes going through the white frame, pointed toward the viewer, to evoke both the holy aura often found in religious artwork and represent how the problem permeates the community.

“I wanted them to pierce that outside veil so that people understood that it’s not contained. It’s not pristine,” he said. “It’s not somewhere else. It’s everywhere.”

Schaaff asked Johnson, a longtime friend and collaborator, to help construct the piece, particularly the process of encasing the needles in resin. This is not the first work Schaaff and Johnson have made together using debris from his property. The two previously collaborated on “The Stones From My Garden,” a piece made of broken liquor bottles, pipes and other drug paraphernalia Schaaff found last fall.

While putting the crucifix together, Johnson said there was blood still moving in a couple of the syringes. She said turning what can be disgusting into something beautiful was both challenging and rewarding.

“Karluk Cruci-fix” is not on display yet, but Schaaff hopes to donate it for public viewing when he finds the right place for it. Those who have seen it have had mixed emotional reactions, Schaaff said.

“They’re both drawn to it and offended by it at the same time, and then sort of saddened by what it really represents,” he said. “And that’s really what art is about. Art is about making you think.”

Many Anchorage residents may not notice drug use in their neighborhoods, Schaaff said, but the issue shouldn’t be ignored.

“They should know that it exists and be aware that they probably need to be doing something,” he said. “I don’t know what the answer is, but the system has been the same for years and it needs to change.”