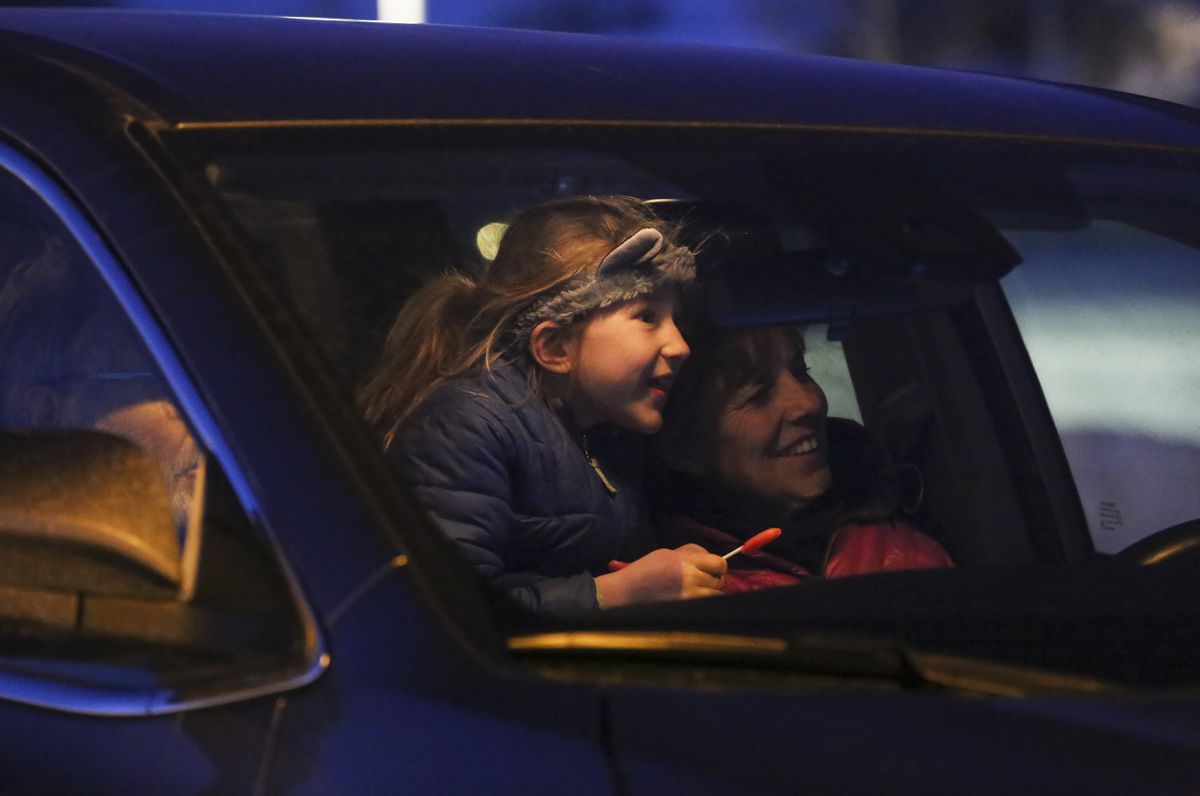 Story McDonald, 7, sits between her grandparents, Willy and Rose Van Hemert, while they watch a projection of ASD's Student Art Show that is being projected onto the outside of the East Anchorage High School building on March 12, 2021. (Emily Mesner / ADN)

Story McDonald, 7, sits between her grandparents, Willy and Rose Van Hemert, while they watch a projection of ASD's Student Art Show that is being projected onto the outside of the East Anchorage High School building on March 12, 2021. (Emily Mesner / ADN)

For the Anchorage Museum, opening night of the Anchorage School District’s Student Art Show would typically bring in nearly 4,000 visitors and be their busiest day. People would meander their way through the crowded floor to view hundreds of works of art displayed in the atrium.

The show is hosted by the Fine Arts Department every March in conjunction with National Youth Art Month. This year — altered to accommodate social distancing requirements — the 49th annual show has been moved outside and onto the museum and high school building facades across Anchorage.

“We didn’t want to let COVID get in the way of displaying artwork this year,” said Leah Maltbie, ASD’s fine arts curriculum coordinator. “We wanted to make sure that same opportunity, though logistically different this year, was still available to the students in the community.”

On Friday night, people parked outside the gym at East High School —some with snacks, warm drinks and blankets — and watched as student art from across the district was projected onto the tan wall.

The show, 1,005 slides displaying 500 pieces of artwork, lasts about two hours and is accompanied by a radio broadcast of student choir, orchestra and band performances on 95.9 FM.

On Friday, kids clapped when artwork appeared while the faint sound of violins spilled from car radios.

As hope for an in-person exhibition dwindled in the fall, people began to brainstorm new ways to showcase the artwork.

Thus, the idea was born.

Jimmy Riordan, owner of the bookmobile, spent his winter doing projections around the city as the pandemic pushed people to avoid indoor gatherings.

Outside East High, Riordan set up a large projector that was powered by his bus to display the slides. As the last pinks and oranges in the sky faded just after 7:30 p.m., pink and orange artwork filled the wall.

“When I was able to Zoom with a class and teach a class it was really fun to see what they’ve created to try to tie in 2020 with their artwork,” she said as she watched the show.

Some students made anime characters in bubbles, others tied in themes of murder hornets, the wildfires that ravaged Australia and California, and the Black Lives Matter movement into their art, she said.

“They had so many things that they really needed to express through their artwork and they did a beautiful job doing that,” Easton said. “Art is healing and art gives us hope.”

McDonald’s children, Story, 7, and Cormac, 8, both had pieces in this year’s show and watched eagerly from their grandparents’ car. “They think they’re like, famous,” McDonald said with a laugh.

Meanwhile, in the row behind them, Grant and Jackie Humphreys sat bundled in their car during their “date night” as the windows around them developed a thin layer of frost.

Eagle River senior Farrah Phillips entered a portfolio titled “Expectations, Nostalgia, and Realizations” in the show. It was composed of six pieces of work created with pen, ink and oil paints. The portfolio earned her a gold key in the nationally recognized Scholastic Art & Writing Awards. Phillips will study studio art while working toward her Bachelor of Fine Arts degree at the University of West Florida this fall.

“Art has always been such a big part of my life,” she said. “Getting recognized was such a mind-blowing thing.”

The smaller pieces in her portfolio were created this school year during her one-hour art classes, which were four days a week, taught over Zoom by Jacob Bera.

“Even though it wasn’t in-person, it just meant so much to just have that outlet in my life,” she said.

Phillips draws inspiration for her art from real life, which was made difficult during a school year of at-home learning and living.

“It’s interesting not being able to go out and see the world,” she said. “I’ve started to make art about things in my own personal life, it’s made my art more personally meaningful.”

In addition, the show will be displayed on the Anchorage Museum’s front lawn facade daily until Sunday, April 4 — starting after sundown — from about 9 p.m. until 8 a.m. The music created by ASD students will accompany the art and be played over the speakers along the walkway to the museum from 10 a.m. to 10 p.m.