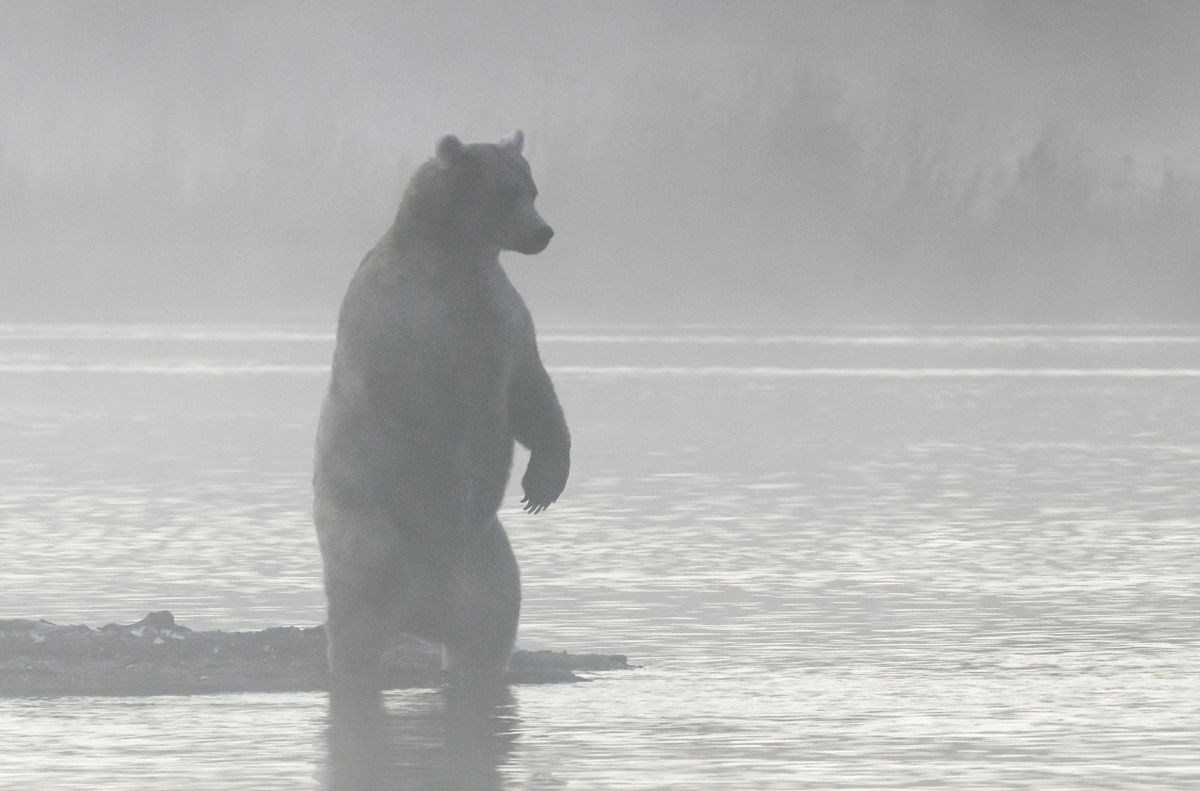 Tom Walker is without doubt one of the best wildlife photographers working in Alaska. The author and photographer of more than 16 books, Walker has explored nearly every corner of Alaska in his quiet pursuit of Alaska’s large and small animals and their environments. His work has earned wide recognition, including the Daniel Housberg Wilderness Image Award from the Alaska Conservation Foundation.

His latest book, largely drawn from previously published material but here shaped into a memoir, shares years of Walker’s photographic adventures. As a patient photographer, Walker is also a keen naturalist, tuned into intimate aspects of animal lives and the plants, waterways, mountaintops and weather that make up their world.

Walker, when once asked what his favorite animal was, answered: snowshoe hare. This admission says a great deal about the man himself, who is fascinated by every aspect of the natural world, including its most modest creatures. For Walker, the cyclic behavior of hares, their relationship to lynx and other predators, and his view of them out his window are all reasons to think about interconnectedness and the beauty that lies all around us.

Readers will not find here a how-to text for choosing camera equipment or framing perfect shots. Rather, “Wild Shots” can be said to amount to a work of philosophy, an examination of a life that reveres other life, studies it in often uncomfortable circumstances, and achieves a kind of blissful satisfaction with a realized image. Walker demonstrates technique only in his commitment to patience, to spending long hours, sometimes days, waiting for animals to show themselves in the context of their own natural, undisturbed-by-him lives.

Early chapters lay out Walker’s background. He grew up in Los Angeles, “a nerdy, lonesome kid” who sought solace in nature, exploring the surrounding hills and watching the deer, coyotes and snakes he discovered there. His interest in photography “was born of a need for evidence,” to prove that what he saw really existed. After high school he worked as a wrangler, then volunteered for the Army. In 1966 he bought a one-way ticket to Alaska and found that it was “the perfect place for me.” He used his first paycheck as a wildlife conservation officer to buy a half-decent camera he carried everywhere with him. Without ever having studied photography or been mentored by others, he learned through practice about composition, lighting and technique.

Walker’s “simple” life in the late 1960s and 1970s seems jam-packed with activity, as he built log homes, worked as a guide, and had a family. His love for being around animals and photographing them grew, along with his skills. Soon enough he was selling photographs and testing out whether he could make a living as a photographer and writer.

After the first introductory chapters, most of the rest of “Wild Shots” leaves chronology behind to focus instead on the author’s photographic experiences with specific animals — Dall sheep, wolves, grizzly and brown bears, polar bears, whales, walrus, loons and foxes among them. One chapter tells of close encounters with bears, and another of tragedies in which people he knew, including his friend Michio Hoshino, were killed by bears.

[A deep dive into the history, science and adventure of ocean exploration]

Although Walker often traveled and photographed alone, his stories also celebrate other Alaskans he admired and learned from. In one sequence, he met the legendary Cecil Rhode while stalking a moose; he shows through that experience and the subsequent friendship just what photographic giants and kind people Cecil and his wife Helen were. Elsewhere, he portrays Rollie Ostermick, who worked as a park ranger and taught others not to unreasonably fear wolves. The familiar names of biologists, wildlife managers, guides and others — all noted as Walker’s friends — pepper his stories.

One example of Walker’s patient observation and naturalist mind is well demonstrated in the chapter “Arctic Loons and Foxes.” To photograph a nesting red-throated loon, Walker first flew to Kaktovik, on the Arctic coast, and then chartered to a remote stretch of beach farther west, within the Arctic National Wildlife Refuge. He camped there, hiking the area to set up and use a blind at a pond but also to investigate what migrating caribou had left behind, to examine an old sod house, and to study fox kits playing around their den. Over the course of several days, he was able to watch a loon egg hatch, the chick die, and the parent loon remove the dead chick and broken shell. He also watched a fox return to its den with a loon egg he feared was the second egg from the nest, but when he returned to the pond he discovered a newly hatched chick already taken to the water, riding the back of its parent.

Now that the coastal plain of the Arctic National Wildlife Refuge is about to be leased for oil development, the several chapters related to Walker’s visits there are especially relevant. “Calving Grounds,” for example, includes not just photographic highlights — the movements of thousands of caribou over the tundra and the 24 bears and seven wolves that followed them — but explanations of why the coastal plain is essential habitat and was the only remaining Arctic coastline held apart (until now) from oil development.

As a collection of the author’s 50 years of intense and intimate experiences throughout Alaska, “Wild Shots” serves as a record of what was and what has changed over time. The author doesn’t belabor this point, although it presents itself in memorable fashion, as when he observes a red fox preying on an arctic fox kit and comments, “As the climate has moderated, red foxes have expanded their range northward, in the process displacing their smaller cousins.” Similar observations, related to changes in sea ice, are found in chapters devoted to walrus and polar bears.

As fitting in a book about a photographic life, “Wild Shots” includes 40 impressive wildlife and outdoor photographs, from moose to polar bear, wolverine, snowshoe hare and northern lights.